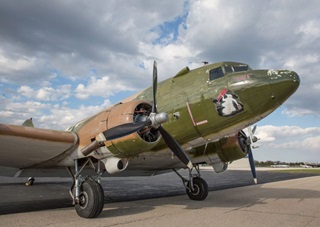 Seven decades after catching the enemy unprepared in Normandy, the Douglas C-47 Skytrain dubbed That’s All, Brother that led the Allied invasion ashore continues to deliver surprises. This time around, many of those surprises have been welcome, though not all.

A unique confluence of historic provenance, timing, chance, and a compelling story made the fund drive mounted by the Commemorative Air Force one for the history books: the first ($75,000) goal was surpassed within 36 hours; within a month of launching the appeal, the organization raised $328,736 from online donors, shattering expectations and giving CAF a very pleasant surprise. (The Kickstarter goal was “stretched” a couple of times as the CAF seized on this unexpected groundswell).

A whopping 2,106 Kickstarter users had committed funds by early July, and all of them will henceforth get regular briefings as the airplane is painstakingly prepared for its new mission as a living link to that historic day. Along with dollars, CAF President and CEO Stephan C. Brown noted, the effort prompted a substantial haul of artifacts and stories, enriching the legendary aircraft’s power to teach future generations.

“We crowdsourced not just money, we crowdsourced history,” said Brown, in a telephone interview. “We’ve gotten some unique pictures from that, we found out some unique details that we didn’t know. People just got excited … they feel like, and they are, a part of the team.”

The hands-on members of the team have begun pulling the airplane apart, digging deeper and beginning to assess the true scope of the job of work ahead of them. From the shop at Basler Turbo Conversions in Oshkosh, Wisconsin (where That’s All, Brother was until recently destined to be converted into a turboprop), CAF Director of Operations David Oliver detailed the early findings in a YouTube video, which may be summarized in a word that has sent shivers through many an airplane owner’s spine: corrosion.

“There’s no doubt that this airplane has some moderate corrosion in some of these stringer areas,” Oliver points out, his voice bright and enthusiastic the way mechanics sometimes get and airplane owners do not when that particular word comes up. “And they run almost the full length of the aircraft.”

Oliver notes in the video that the mission is to salvage as much as possible:

“Everything that we do comes with the question, can we continue to overhaul pieces we’ve got?”

In the cockpit, panel sections dangle amid exposed wires, and light shines in through gaping holes that are not part of the famous Douglas design.

“All of this is going to be redone,” Oliver says, brightly. “We’re really trying to restore the aircraft back to its original condition.”

Brown said fundraising began even before the campaign went public, and substantial donations will be sought by personal appeals to CAF benefactors at EAA AirVenture, where That’s All, Brother will be on prominent display throughout the show. Vietnam veteran and actor Dale Dye, who starred in the HBO miniseries Band of Brothers, and paratrooper James “Pee Wee” Martin who jumped on D-Day and again to mark the seventieth anniversary, will be on hand July 22, lending their star power to the airplane's soon-to-be-restored luster. (It has proved quite fortuitous that the C-47, which served many roles under many owners after World War II, managed to get to Oshkosh before its long slumber in the boneyard.)

It remains to be seen just how much CAF will have to invest bringing this very special warbird back to life, not to mention how long it will actually take to prepare for flight.

“We’re going to do a restoration which will allow the plane to fly for another 50 or 100 years. It’s not an inexpensive proposition,” said Brown, noting that any vintage aircraft owner is well aware of the money they demand, and “‘warbird’ means more money.”

The restoration crew must remove much more skin and at least one of the wings, and untold stories remain to be discovered underneath all of that.

While pleasantly astonished by the donation response from both within and outside of the warbird community, Brown said crowdfunding is unlikely to become a CAF routine. It was a unique combination of factors that drove this success, including the very special link this particular C-47 has to history. Brown said that provenance sets the airplane apart.

“This airplane’s connected with a bigger event, that being D-Day,” Brown said. “That’s where it broadened the appeal.”

More than a dozen other vintage warbirds are being painstakingly restored by CAF units around the country, though none are nearly so famous. Brown said those projects will continue to be supported by more traditional fundraising methods.

“That’s just part of our DNA,” Brown said. “We always have projects.”