Electric Cri-Cri gets jump on E-Fan 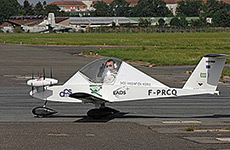 Hugues flew from Dover, England, to Calais, France, in an effort that was four years in the making, according to Duval. He flew the trip doing 150 kilometers per hour, or 81 knots, and landed at 7:40 p.m. He said that the flight will count as an official record, sanctioned by the Aéroclub de France, which is a French representative in the Fédération Aeronautique Internationale—the world body responsible for verifying and posting record flights.

That was a blow to Airbus, which had planned its E-Fan crossing with great fanfare and attention to publicity. A helicopter and rescue boat followed the E-Fan along its 36-minute crossing, just in case.

Originally, Pipistrel intended to make the first such Channel crossing using its Alpha Electro two-seat trainer, which is powered by a Siemens 80-hp electric motor. However, at the last minute Siemens demanded that the flight not be made, citing safety concerns. Siemens then banned Pipistrel from any further use of the motor, and asked for its return. Suspicions are that Airbus pressured Siemens into this ban, given its apparent obsession with being first.

Pipistrel acquiesced with the ban, canceled its flight, and today congratulated Duval. “I really appreciate the Pipistrel team support these days,” he said in an email.

AOPA Pilot Editor at Large
AOPA Pilot Editor at Large Tom Horne has worked at AOPA since the early 1980s. He began flying in 1975 and has an airline transport pilot and flight instructor certificates. He’s flown everything from ultralights to Gulfstreams and ferried numerous piston airplanes across the Atlantic.
Go to Thomas A. Horne's Profile
Topics: Electric, Aviation Industry