Get the app Get the app
AOPA Members DO more LEARN more SAVE more - Get MORE out of being a pilot - CLICK HERE
News & Media Piper: Investment continues after layoffs 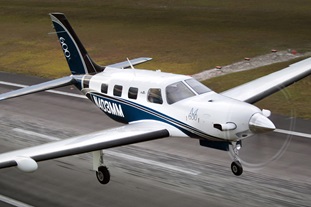 In an EAA AirVenture 2015 press briefing, Piper Aircraft CEO Simon Caldecott commented that “above everything else, we must match production rates with market demand.” The comments came in response to questions about the company’s decision the previous week to lay off up to 150 production workers. Softening demand, particularly in markets outside North America led to the decision, he said.

Nonetheless, Piper continues to make significant sales, including an order during AirVenture for 26 airplanes to the FlightSafety International Academy in Vero Beach, Florida. The academy, located just down the ramp from the Piper headquarters, will take delivery of 20 Warrior trainers by the end of the year and six Arrows in the first quarter of 2016. The school placed options for another 20 airplanes, making the order “one of the largest ever for the first day of AirVenture,” according to Caldecott.

Piper will focus on “key demand initiatives,” such as the M600 turboprop certification process. The upgraded Meridian is now expected to be certified in early 2016, a few months later than originally planned. However, certification will include flight into known icing conditions, a level of certification that had originally been planned for a second phase in 2016.

Caldecott said that Hartzell plans to receive certification by the end of the year for a new five-blade composite propeller for the Meridian and the M500. The $52,000 propeller weighs about 15 pounds less than the four-blade system currently offered. The new propeller may be offered on the M600 once initial certification is complete.

“The Hartzell Propeller five-bladed prop was designed with the intention of enhancing flight performance,” said Drew McEwen, vice president of sales and marketing at Piper. “This composite prop will help increase climb rate and decrease noise, with the secondary benefit of elevating ramp aesthetics. It is a win, win, win for our products.”

Contributor (former Editor in Chief)
Contributor and former AOPA Editor in Chief Tom Haines joined AOPA in 1988. He owns and flies a Beechcraft A36 Bonanza. Since soloing at 16 and earning a private pilot certificate at 17, he has flown more than 100 models of general aviation airplanes.
Go to Thomas B Haines's Profile
Topics: Events, EAA AirVenture, Aviation Industry