Get the app Get the app
Already a member? Please login below for an enhanced experience. Not a member? Join today
News & Media Downsized Rutan designs 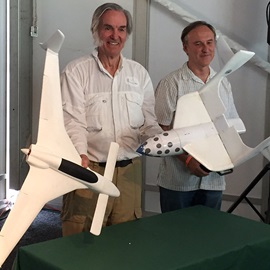 Remote control modelers will have a chance to fly some of Burt Rutan's most innovative aircraft.

The prolific designer of SpaceShipOne, the Long-EZ, White Knight, and others is allowing them to be produced under license as RC models. Rutan RC plans to begin selling Long-EZ models in 2015, and SpaceShipOne and the White Knight carrier airplane will follow.

Rutan examined a scale SpaceShipOne at an EAA AirVenture news conference and quipped that the model "sure beats the one we threw off the tower" at Mojave, California, as a crude test of its revolutionary "shuttlecock" folding tail design.

The scale version has a ducted fan engine instead of a rocket motor. And the RC model is capable of folding and unfolding in flight, just like the original.

The company plans to reproduce many of Rutan's 46 aircraft designs. It also plans to test new concepts such as the SkiGull, a full-scale aircraft that Rutan is currently building.

The company hasn't set prices for its products but estimated they will be roughly equal to others of similar size and complexity. The Long-EZ is likely to have a retail price of about $200, and SpaceShipOne will be more due to its higher complexity.