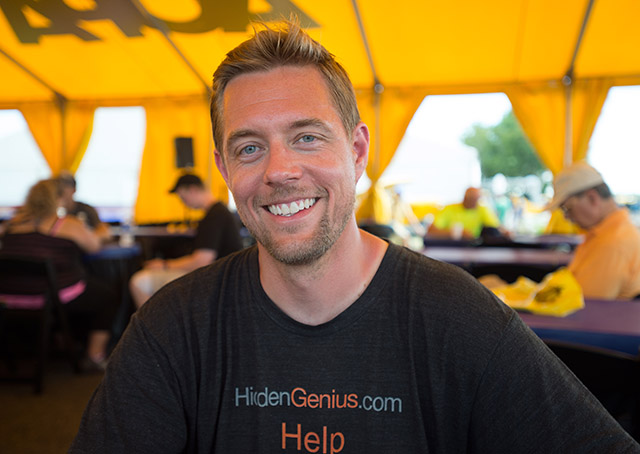 Private pilot Trevor McKeeman says that many of the world’s record-breaking aviation feats were fueled by visions of financial prizes, including Charles Lindbergh’s historic Atlantic Ocean crossing in 1927, so the HiddenGenius.com founder hopes his idea for a crowd-funded bounty will inspire technology buffs to create  tools to combat color vision deficiency.

The self-described techno geek grew up near the general aviation mecca of Wichita, Kansas, and as a youngster he set his sights on joining NASA’s space flight program. McKeeman loved everything about aviation and even went to astronaut training camps for extra science, technology, and math that would afford him a flight advantage. The aspiring pilot said that for some reason, he couldn’t figure out why he had to work harder than any of his classmates.

He was in grade school before McKeeman finally realized that he had color vision deficiency. The lack of color clarity made the second-grader’s schoolwork assignments more challenging and his vision for the future was affected as well. “It was tough to think that the channel to becoming an astronaut was cut off to me,” he said during a conversation at EAA AirVenture in Oshkosh, Wisconsin. Now, the Maule MXT-180 owner wants to generate a color vision cure by leveraging social media and the Internet to attract brainstorming power to the HiddenGenius.com challenge.

McKeeman said his research into color deficiency—commonly called color blindness—reveals that 32 million Americans are affected by it. That’s about 1 in 12 males and 1 in 200 females who are challenged by the FAA’s color charts. McKeeman figures that number could be substantially reduced by technology if a tool is developed to help people with their color vision.

McKeeman said he was on the edge of either passing or failing his color vision exam during his initial flight training and just barely squeaked through. He thought that if color vision affected him, thousands of other pilots might also be facing the same hurdles. “It’s scary to think the ability to fly could be taken away from me because of color vision deficiency and the FAA’s vision regulations,” he said.

In the 1920s when aviation was in its infancy, a hotelier offered $25,000 for the first person to fly a single-engine airplane nonstop across the Atlantic Ocean, from New York to France. Although many well-known aviators tried the crossing, it was an unknown airmail pilot who captured the feat, the loot, and the recognition.

Now McKeeman hopes a friendly competition with a prize purse will draw innovators from around the world to Hidden Genius and find a way to answer a challenge they might not have known previously existed. “The whole idea of HiddenGenius.com is to allow anybody to spark the next great technological competition,” he said.

Putting his money where his mouth is, McKeeman recently opened his own wallet and threw down $1,000 to begin what he hopes will be a crowd-sourced technological solution to the age-old problem of color vision correction. Outside-the-box thinking is encouraged and McKeeman said there were only two simple rules so far—the solution has to pass the FAA color vision test and it has to be approved by regulators. He hopes to gain sponsorship so the prize purse can substantially grow and competitors can go into the rule book themselves to draft additional guidelines for the competition.

The young boy who had visions of becoming an astronaut knows he’s not alone in the fight to fix color vision problems. “At EAA AirVenture I ran into other pilots all over the place and they told me they struggled with the exact same thing,” McKeeman said.

“You have to put your money where your mouth is,” he said while walking the grounds at Wittman Regional Airport. “I’ve got a feeling that if we raised a big enough prize purse, there is nothing like a competition to bring out innovators. I’m just hoping we can find the solution to this color vision problem and give a chance to other young kids that want to fly airplanes.”