A small hexacopter lowered small packets of medicine to waiting staff at a free clinic set up at the Wise County Fairgrounds in Virginia on July 17, completing the first FAA-sanctioned delivery by a drone. Less than two weeks later, retail giant Amazon unveiled a proposal to carve out airspace (primarily between 200 feet and 400 feet agl) where unmanned aircraft could chart courses to waiting customers, delivering small items in half an hour or less.

The days of drone delivery may be upon us sooner than some may have thought.

Sen. Mark Warner (D-Va.) called it a “Kitty Hawk” moment when the unmanned copter created by Flirtey Inc. successfully completed its delivery. NASA, Flirtey, and Virginia Tech collaborated to secure FAA approval for the mission, and most of the 30-plus miles between pharmacy and clinic were covered by a remotely piloted Cirrus SR22 operated by NASA with a safety pilot on board.

Unlike the Wright brothers, the operators of this mission had a pretty good idea that everything would fly. The details of making them safe to operate in a sky shared with manned aircraft will be another challenge, one that Amazon hopes to solve with some basic separation. The retailer publicly unveiled an airspace reconfiguration proposal July 28 that would reserve altitudes up to 400 feet agl (away from airports and other designated no-fly zones for drones) for unmanned aircraft. Local deliveries would be flown below 200 feet, with the 200-to-400-foot altitude band designated for longer trips at higher speeds. The space between 400 and 500 feet would be reserved as a buffer zone separating manned and unmanned aircraft.

The Amazon proposal is similar in some respects (including altitudes) to the rules proposed in February by the FAA,  which also require a 500-foot maximum altitude, and additionally that unmanned aircraft will be able to “see and avoid” other aircraft and obstacles. Technology allowing unmanned aircraft to detect other objects and avoid them is being tested for larger drones, though the path to enabling smaller unmanned systems (under 55 pounds) to detect other flying objects is less clear.

Amazon provided an early look at its proposal to AOPA staff, and pilots are strongly encouraged to contact AOPA to express their views on the airspace reconfiguration that Amazon has proposed, including potential impacts on operations conducted at low altitude away from airports (including agricultural applications, medical transport, and similar missions). 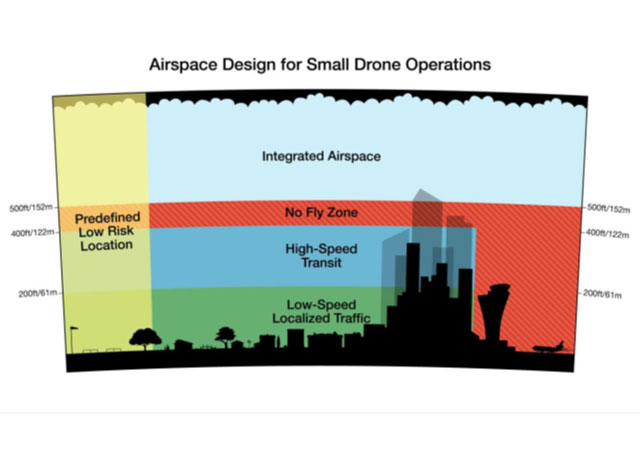