Get the app Get the app
Already a member? Please login below for an enhanced experience. Not a member? Join today
News & Media ‘Floatplane Odyssey’ recounts earthrounding flight 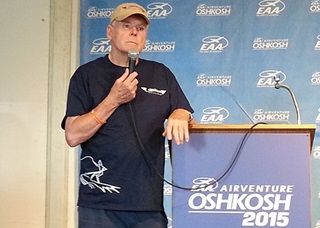 A tale of flying adventure, severe injuries, international political maneuvering, and an emergency at sea comes to life in Floatplane Odyssey, a book that commemorates the twenty-fifth anniversary of Tom Casey’s 1990 around-the-world flight in a Cessna 206 on floats.

The book, announced at EAA AirVenture, shares not only the adventures Casey experienced along the route but also the behind-the-scenes negotiations that took place as he traveled through various countries landing only on water.

“A lot of stuff Tom never knew about until I wrote the book,” said Bill Coleman, who served as the route planner, public relations specialist, and international negotiator coordinating permissions for Casey to fly through the countries. Coleman worked for Philips 66, which sponsored the historic flight.

Casey set out to fly from Seattle to Alaska, and then west through the Soviet Union, but after reaching Alaska, he learned that the Soviet Union had denied him access to its airspace. He reversed course, flew back to Seattle, and then headed east. The trip, which was planned to take 60 days, stretched to 188 days, as he flew through the United States, Canada, Greenland, Iceland, Scotland, Ireland, Italy, Greece, Crete, Egypt, Saudi Arabia, Bahrain, United Arab Emirates, Pakistan, India, Thailand, Malaysia, Singapore, Brunei, Philippines, Japan, the Aleutian Islands, Alaska, and British Columbia.

“Each and every stop that Casey made, there was some adventure,” Coleman said.

He flew more than 29,000 miles in the 188 days and landed only on water. Casey said that many of the countries he flew to had never seen an aircraft on floats; most didn’t have seaplane bases so he couldn’t obtain weather information about the water conditions.

Casey said that sometimes he had to use portable fuel containers to refuel the Cessna 206. While stretching across to a dock in Scotland to pick up the fuel cans, Casey injured two disks in his back. He continued the flight, but a few days later, during what was supposed to be an overnight stop in Saudi Arabia, he awoke paralyzed from the waist down, Casey recalled. That summer, Operation Desert Shield had also broken out, so Casey stayed in a military hospital in Saudi Arabia for 28 days where he underwent back surgery before continuing the flight.

On Nov. 1, 1990, Casey’s aircraft had an engine failure, forcing him to ditch in 20- to 30-foot swells near the Aleutian Islands. Casey was rescued and taken to a secret military base where the engine was repaired. He remained there until Dec. 7 when he was able to continue the trip, landing back in Seattle on Dec. 18.

The book is available for purchase online for $25.