Get the app Get the app
Get the latest news on coronavirus impacts on general aviation, including what AOPA is doing to protect GA, event cancellations, advice for pilots to protect themselves, and more. Read More
Already a member? Please login below for an enhanced experience. Not a member? Join today
News & Media Pilots should note upcoming TFR over Florida

Editor's note: This story has been updated to include information from the FAA's notam. 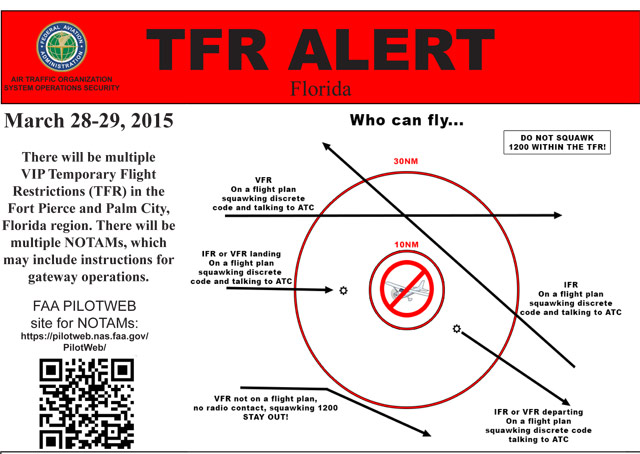 The FAA has issued a flight advisory and notam to alert pilots of an upcoming presidential temporary flight restriction over the Vero Beach-Palm City, Florida, area on March 28 and 29. The FAA started reaching out to pilots in the area March 20 in an effort to decrease the number of TFR violations that typically occur in the state with such a high density of flight activity.

The notam establishes two 30-nautical-mile-radius TFRs and two inner 10-nm-radius general aviation no-fly zones, each extending from the surface up to but not including 18,000 feet.

Gateway procedures for aircraft that need to operate at Witham Airport are detailed in the flight advisory and notam. Melbourne International Airport (KMLB) and Palm Beach International Airport (KPBI) have been designated as TSA “security screening sites” for aircraft that need to fly into Witham during the TFR’s effective times, according to the flight advisory.

The FAA reminded pilots that the agency can take administrative action ranging from levying civil penalties to suspending or revoking an airman certificate against those who do not comply with the airspace restrictions and procedures. In addition, the U.S. government can pursue criminal charges or even use deadly force if the aircraft is determined to be a security threat.

“Pilots must be vigilant and check notams before flight,” said Tom Zecha, AOPA manager of aviation security. “Florida has a poor track record of a high number of TFR violations. Pilots must do their part by checking notams and being aware of where they are flying to reduce the number of airspace violations.”