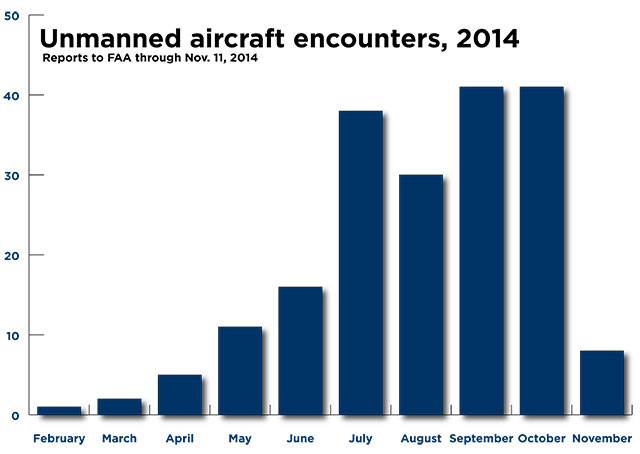 Nearly 200 encounters with unmanned aircraft, ranging from amusing to chillingly dangerous, were reported to the FAA between February and November of 2014; a list published by a New Orleans television station May 26 documents the growing use of drones—authorized and otherwise—and their infiltration of the National Airspace System.

The U.S. Coast Guard reported that a DJI Phantom quadcopter operated by a photographer flew over the admiral’s residence at Diamond Head Lighthouse on Nov. 8, though no property damage or National Airspace System penetration was noted. But many of the reports documented on the list published May 26 by Fox 8 News, a copy of which was sent to AOPA on request, detail more troubling encounters: unmanned aircraft flying much higher, in some cases near manned aircraft, airports, or navigation aids.

The reports were collected by various FAA facilities (most of them relayed through air traffic control, according to an FAA spokesman), and show a steady increase from just one report in February 2014 to 41 reports in July and August of 2014. The FAA is working to establish a systematic process for collecting these reports. So far they have been supplied by flight crews and public safety agencies on their own initiative. The FAA redacted the names and telephone numbers of those filing reports, a spokesman said, and “anything related to national security,” but the reports are otherwise unaltered.

One report details unmanned aircraft activity being conducted on a runway in Joplin, Missouri, while the airport also hosted normal operations, though no notam was published for the unmanned operation. The person filing the report investigated and was told the activity was apparently illegal, and the operation ceased after the airport manager was notified. At least one aircraft in the pattern for the runway requested a different runway.

Such near-misses were the exception, though several reports document unmanned aircraft operating well inside controlled airspace. In many cases the intention of the operators is unknown, though at least one military drone (a small, hand-held model) flew onward after losing data communication with the ground station. “The UAS last known altitude 650 feet, SW bound with a fuel exhaust time of approx 40 minutes. Expected to remain in the restricted area,” the report, filed Oct. 24 in Columbus, Georgia, states.

In another case, operators lost control of an unmanned aircraft being used to record a high school football game in Madison, Mississippi, and it flew into controlled airspace. Local police investigated the incident, which resulted in no property damage or injuries, though that unmanned aircraft was spotted a mile from an airport by a passing pilot.

AOPA has long advocated for safety above all when it comes to unmanned operations, stressing the need for all aircraft operators to be able to “see and avoid” other aircraft at all times, whether the pilots are on the ground or in the air. AOPA participated on the FAA’s Small Unmanned Aircraft Systems (UAS) Aviation Rulemaking Committee, which started meeting in 2008 to develop recommendations for the agency to integrate UAS safely. In 2009, the committee recommended that small UAS operators be required to keep the craft in sight and take training. In April, AOPA submitted formal comments on proposed rules, asking the FAA to limit commercial-use UAS to 400 feet agl to mirror the regulations already in place for model aircraft. AOPA asserted that lowering the ceiling for UAS from the FAA’s proposed 500 feet to 400 feet would add a “small buffer between manned and unmanned operations in most areas.”

The AOPA Air Safety Institute offers a free online course, Unmanned Aircraft and the National Airspace System, to educate pilots on the different types of unmanned aircraft and how to safely coexist. AOPA has also joined with unmanned aircraft organizations to support the "Know Before You Fly" education campaign.