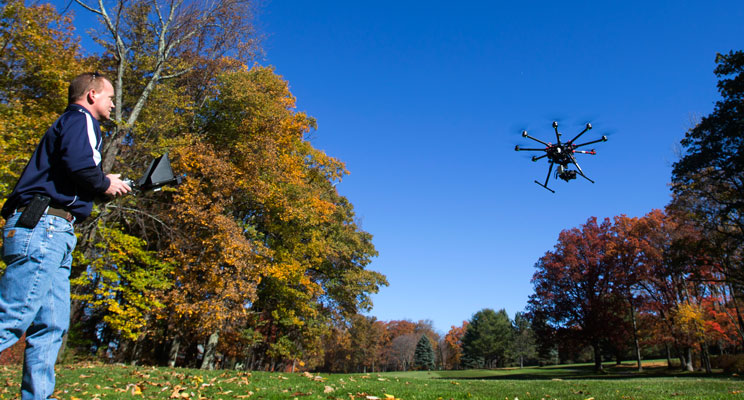 Frank Galella’s new flying machines cost about as much as a 30-year-old Cessna with four seats; a decent, mid-time engine; and a reasonably recent panel. He has paid more than $50,000 for a single octocopter, has assembled a fleet of them, and while they won’t take him places like his Cessna T182T Turbo Sklyane does, they can take high-end cameras weighing several pounds to places where no such camera had been until just a few years ago. The footage is smooth, detailed, and in demand. Corporations looking for glamorous fly-bys of their headquarters and luxury resorts eager to show off amenities and scenic locales are among the clients who have hired Galella and his crew—at $3,250 a day—to drone them right.

Galella, an AOPA member, has been in the general aviation business for nearly three decades, and built a New Jersey company from the ground up to sell and repair aircraft. (He sold the flight school portion of that business to another operator a few years ago.) He was more recently one of the first 100 unmanned aircraft operators to secure FAA approval for commercial operation of drones, commonly known as a Section 333 approval in reference to the 2012 federal law that made it possible. That, in turn, enabled the creation of a new business, Next Generation Aviation Services. Lincoln Park Aviation remains a factory-authorized service center for Cessna aircraft and an FAA-certified repair station for Cessna, Piper, Cirrus, and Columbia aircraft, though the unmanned aviation side of the business has lately been taking up a growing share of Galella’s time and attention. 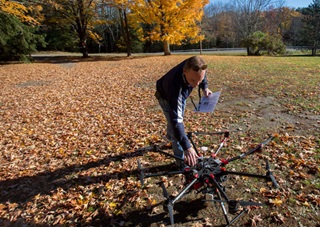 He has invested tens of thousands of dollars, not just in his unmanned aircraft and the equipment they require, but also in legal advice, insurance, and other expenses. Galella showed a disbelieving writer an invoice for one of those highly customized eight-rotor copters, one that is able to carry a variety of high-end cameras such as Canon professional-grade DSLRs and Red Camera systems made for cinematic applications that cost even more than the $55,793.80 (batteries included) listed on the custom octocopter invoice. Every assignment requires at least two ships, one ready as a backup in case of equipment failure.

“We have backups to the backups,” Galella said.

Each aircraft (and they are legally aircraft, with FAA registrations) has redundant autopilot and GPS systems. Professional unmanned aircraft pilots train to handle failures, including the loss of one or more motors. This is one of the reasons Galella uses octocopters for every job: They can lose one motor and continue flying with no noticeable difficulty, and the models Galella fits with custom features and systems can survive even a second motor failure, which has yet to happen, protecting the very expensive cameras they carry as well as people and property. 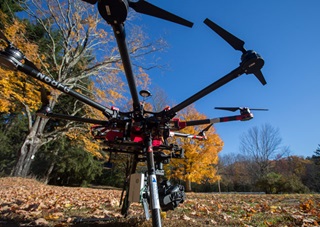 Quadcopters and hexacopters, Galella said, cannot continue flying after even one motor failure, and he uses them only for training. Underwriters require training that covers safety, best practices, and regulatory compliance, as well as risk assessment and mitigation.

Galella and others who secured FAA approval for unmanned commercial operations had to create documentation and procedures for flight operations that are largely adapted from GA. He compared the process to securing a charter certificate under Part 135.

“All of those manuals had to be in place in order for the 333 to be issued, and we use them all,” Galella said.

While the FAA may change the requirements next year, certificated pilots are required to be in command of each unmanned flight, and also required to keep the aircraft in sight at all times. The FAA now allows Section 333 operations below 200 feet agl and more than five miles from an airport under a blanket authorization. Commercial operators must file notams in advance of each flight and keep monthly logs of flight data. If the job requires it, they may apply for specific authorization for operations outside of the aforementioned airspace limitations, and Galella has done this, too, operating within Class D airspace (with FAA approval) to film for a corporate client.

That, he said, was a first. There will likely be more to come.

Galella said his Section 333 approval was also a first in that it specifically lists an education mission along with commercial flights, and he’s eager to demonstrate the technology for aviation professionals, firefighters, police, and civic organizations. He is particularly keen to work with pilots, air traffic controllers, and others involved with manned aviation, hopeful that knowledge will help ease concern about and distrust of unmanned aircraft and their operators that persists among many manned aircraft pilots. 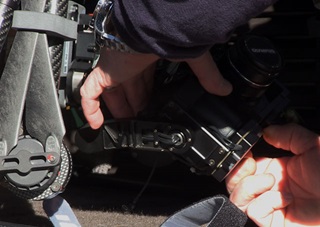 “So far we’ve all been working together, and the folks at Lockheed (Martin Flight Services) are doing a great job,” Galella said. “We’re all very much learning this process, which is really good for the manned pilot … I think that’s also going to lessen your sightings, too.”

He was referring to the hundreds of unmanned aircraft sighting reports submitted by pilots and others to air traffic controllers in the past two years, including a few that appeared to observers dangerously close to runway approaches, or thousands of feet up, which would put them far beyond visual range of anyone on the ground. Commercially operated drones, Galella said, are almost certainly not the culprits. For one thing, even if onboard flight controllers, autopilots, and transmitters fail, drones under 55 pounds can only fly for about 25 minutes at most, and would most likely run out of battery before exiting their authorized airspace and sink to the ground.

“Hands-down the issue that we see is when the industry goes from the hobbyist flights, which are perfectly fine. The integration of hobby RC flying has been around for decades,” Galella said. Commercial operators with insurance and FAA approvals have many incentives to operate safely and legally, and the imperative to protect expensive equipment is not the least of them.

“In the middle of that you have the hobbyist, or the off-the-street individual with no aviation background (who) decides to wander into off into territory where they think they have a potential income,” Galella said. He estimates that this group accounts for no more than 20 percent of the drone-flying public. “They’re intrigued by the idea. They go out and they buy an off-the-shelf product that is still very capable and still very dangerous but yet they have no knowledge of it, and they’re not interested in learning. Those are the people who keep showing up in the news, you know, in a negative spotlight, and those are the people that really need to be educated.”

As the autumn foliage peaked, Galella invited AOPA to Skytop Lodge, a luxury resort established in 1928 on 5,500 scenic acres in the Pocono Mountains of Pennsylvania, for his presentation to the resort’s board of directors. Earlier in the year, he and his full-time production manager, Marc Mendoza, made the same trip to film the main lodge, waterfall, lakes and ponds, golf course, paintball battlefield, climbing tower, stables, and many other amenities. (They are joined by a third crew member known as a “flight coordinator” on assignments that require communication with air traffic control, crowd control, or other additional support.) 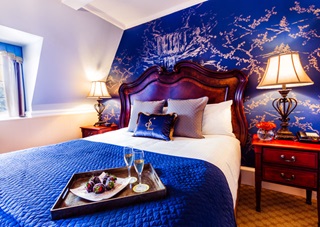 Skytop General Manager Jeff Rudder said Galella’s company filled a void that ground-based photographers could not, giving viewers a perspective on the sprawling luxury resort that is unavailable by other means. Galella took the writer to the waterfall and swimming hole prominently featured in the promotional video his company created for Skytop, a very tight space between rocks and trees that no helicopter could safely reach.

“I really thank Frank for what he was able to do to introduce, or in many cases reintroduce, Skytop Lodge,” Rudder said.

Much to this writer’s relief (having no previous unmanned aircraft experience), the radio control transmitter Galella handed over is the one that cannot possibly hurt anyone or anything: It controls only the gimbal-mounted camera system. The briefing took about 15 minutes just the same, covering camera basics, the ship’s status light (an LED bright enough to be visible even in direct sunlight), and communication between pilot and camera operator who work as a team. The gimbal allows the camera to hold steady on a fixed point, pan, tilt, or rotate smoothly even while the aircraft is jerking and jinking in gusty wind. In effect, it’s like running a camera crane that can go nearly anywhere and takes just a few minutes to set up (once the crew is briefed).

Galella’s octocopter is fitted with a Connex system that transmits high-definition (1080p with zero latency) video to a ground display, and the gimbal operator uses thumb sticks on the radio controller to aim the camera in virtually any direction but straight up. There’s a switch to automatically swing the camera forward to gain bearings (and to configure for a landing-friendly CG), and another flick of a switch points the camera straight down. There are many switches on both controllers, and the pilot can take advantage of autopilot assistance to hover in place, or fly a programmed path. Another button can bring the aircraft home to its launch point. 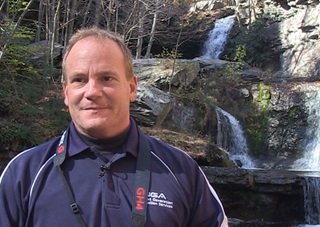 Galella certainly hasn’t given up on manned aviation—Lincoln Park Aviation stays busy with aircraft repairs. He celebrated 28 years in general aviation in September, and plans to continue, though he sees more business potential and opportunity in unmanned aviation.

“We’ve seen a significant reduction in aircraft owners, pilot graduations, you know, for whatever the reason may be,” Galella said. He ticked off a list of jobs that are being created as unmanned aircraft take off, including jobs for certificated pilots (required for all current commercial unmanned operations), as well as maintenance and repair, insurance, legal services, and video production. Add to that the many missions unmanned aircraft excel at beyond photography, including mapping, monitoring crops, and inspection of power lines, bridges, and other infrastructure.

“This industry with the UAV certainly opens up a broad spectrum of job development and job creation,” Galella said. “This is going to be every bit as big as manned (aviation) in the next decade.”