Get the app Get the app
Already a member? Please login below for an enhanced experience. Not a member? Join today
News & Videos Flight schools can get sims via pay-per-use program 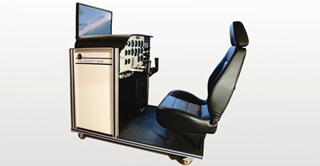 Xylon Saltzman wants to put a simulator in every flight school that wants one. His company, one-G simulation, will deliver and install an FAA-approved advanced aviation training device (AATD) with no up-front cost via a program dubbed one-G Access.

One-G Access “in some respects is kind of a vending machine concept,” Saltzman said. “We deliver the machine, at our cost, and we absorb the shipping fees. We arrive onsite, [connect] it to power and Internet, train the site administrator or chief flight instructor on its use, and the flight school begins to use it immediately.”

The program offers one-G’s $30,000 foundation, an AATD modeled on the Cessna 172, coupled with the 1G-IOS, an operating station controlled by a wireless tablet that allows flight instructors to create scenario-based training sessions.

Flight schools don’t pay for the unit. One-G receives a percentage of the hourly rental rate, which is tracked via the unit’s software. Student and instructor create unique credentials to log onto the unit. A timer starts when the session begins, and the software tracks the time. “It then reports that use to our server in real time and it does that via the Internet,” Saltzman said. If the Internet connection is lost, the session is not interrupted, and when the connection is restored the unit’s software reports the use during that downtime. The instructor’s fee is not included in the billing process.

“Flight schools are only billed for the actual time that the machine is running,” Saltzman said. “They don’t have any overhead while it’s sitting there and not being used.”

One-G determines the hourly rental rate, taking into account the flight school’s geographic location and other factors. A sliding scale provides what Saltzman terms “incentivized use”: The more the simulator is used, the more flight schools will earn per hour.

“If they want to charge less [than the negotiated hourly rate], they’re welcome to charge less, if they think it will bring customers in the door,” Saltzman said. “We just retain a percentage of the hourly income from the machine. If they find through their own market valuation they will get more volume and do better by lowering the rate, they’re welcome to do that.”

There’s no long-term agreement, Saltzman said; either party can discontinue participation with 30 days’ notice. Flight schools that wish to purchase the unit outright can do that as well, he said.

Saltzman said one-G Access will help flight schools that haven’t yet integrated simulation into their curriculum, as well as those businesses that don’t have the financial means to acquire a simulator.

The one-G foundation is a full cockpit with yoke constructed from anodized aluminum stock to match the feel and weight of the real thing. It rolls on castors, fits through a standard 36-inch door, and can be placed in a variety of locations. It includes a suite of avionics, such as the 1G-650, a GPS emulator module based on the Garmin GTN 650. The foundation achieved FAA approval in 2014.

“What we were finding, even an attractively priced, high-fidelity piece of equipment, there were still many schools that just really were not ready to jump into that,” Saltzman said. “Therefore this problem of being able to leverage or reluctance to take the leap just disappears, and what they have is access to a great machine, which is in keeping with our mission statement,” Saltzman said. His company, formed in 2010, wants to improve aviation safety training through model-specific devices accessible to all pilots. The company also makes the tarbes 7, which replicates a Socata TBM 700 cockpit, and the flagship, which simulates a Beech Bonanza or Baron 58. All units are assembled in Seattle.

Saltzman said the one-G Access program has been tested with several flight schools in the Pacific Northwest. “We wanted to make sure what we have been seeing with reliability and integration between hardware and software, we could really support this and understand if there were any gaps in how we expected it would go,” he said. “It’s going beautifully. The schools that have it here in the Pacific Northwest unanimously agreed it’s working well for them.”

For more information on one-G products and programs, contact the company via email or by telephone (888/751-1011).