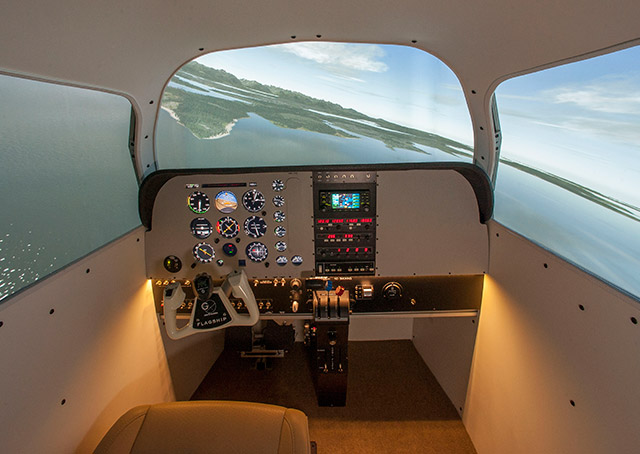 In 2010, Xylon Saltzman was a CFI who found the available options wanting when it came to affordable, high-quality simulators for general aviation. So he decided to build his own.

“I was going to embark on a project just developing my own simulator that I would use with my students,” Saltzman recalled in a telephone interview. FAA approval was not even part of that initial plan, though Saltzman changed his mind and submitted his first simulator, one designed to faithfully replicate a Beechcraft Bonanza cockpit, and secured its approval in 2011 as an advanced aviation training device (AATD).

“The company was kind of born around that,” Saltzman explained. He is now hiring more staff, and preparing to market his company—one-G simulation—in earnest, having landed in 2014 FAA approvals for a Garmin G650 emulator, along with a Cessna 172 AATD dubbed “foundation” approved in December. The one-G “tarbes 7,” which replicates a Socata TBM 700 cockpit, and “flagship,” an updated version of the original device that is able to stand in for a Bonanza or Baron 58 (the throttle quadrant can be swapped and panel adjusted to match each model), were approved by the FAA in 2013 and 2014, respectively. Saltzman said he expects to add to both ends of the model lineup, though he awaits customer feedback with an ear for what other CFIs and flight schools want.

“You’re catching us at a really interesting time,” Saltzman said. “We’re just about to head into the market.”

The company has sold “a couple of units” so far, but the focus to date has been on developing and refining the various offerings, an effort undertaken by a full-time staff of five poised to grow by 40 percent (interviews are underway for two new positions).

“Pretty much everyone in the company is a pilot, which is a little bit unusual,” Saltzman said. “We’re all just passionate about aviation.”

Saltzman also operates modern pilot flight school (also named sans capital letters), based at the same location in Seattle’s Ballard neighborhood, about a half-hour drive (excluding traffic) from the nearest airport. Instructors and students have spent hundreds of hours testing and learning on devices crafted with an eye for detail. Saltzman, who remains an active flight instructor himself, said one-G simulation has in-house manufacturing capabilities including computer-aided design and machining equipment. From the control yokes to avionics, “everything is assembled and built right here in Seattle,” Saltzman said. While the company licensed the flight simulation engine (the computer software), the hardware for the active force feedback control-loading features of the flagship and tarbes 7 models was developed in-house; Saltzman has various patents pending. He said the control-loading systems are based on mathematical modeling of angle of attack rather than airspeed, and create a more realistic experience.

Saltzman’s timing has so far been impeccable: He launched the company at a time when technology is facilitating rapid advances in low-cost simulation, and is turning attention from development to marketing just after the FAA reversed a previous decision to limit the amount of time that can be logged in AATDs. A direct final rule published Dec. 3 will allow pilots to log up to 20 hours in approved training devices, restoring standards that the agency revised in January (prompting opposition from AOPA).

"We should use simulators from the very first day, and continue to use them all the way,” Saltzman said. “I’m happy to see that the tide has shifted back in the right direction.”

Saltzman said simulators are ideal for teaching procedures, risk management, and decision-making, though much depends on accurately modeling the look and feel of particular aircraft.

“The mission really was formed around trying to improve access to model-specific simulators,” Saltzman said. “I felt that the generic simulators just weren’t doing a fantastic job of helping students learn flows within a cockpit, that type of thing.” 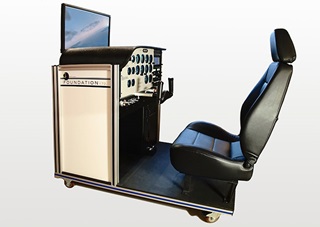 The base price of one-G’s foundation is $30,000, Saltzman said—a price that includes a commercial-use license, FAA approval, and the G650 emulator. The foundation can be wirelessly controlled (through a patent-pending interface) and a single instructor can run multiple devices. Even without control loading, this entry model has a yoke made from anodized aluminum stock to match the feel and weight of the real thing, among many details that “can create quite a bit of the realism that I find missing” from other devices on the market, Saltzman said.

The flagship, an update of Saltzman's original, starts at $85,000, with control loading among the upgrade options. It can be configured to replicate either a Bonanza or a Baron. The top-of-the-line tarbes 7 (a TBM 700 trainer) sells for $149,000 and includes control loading as a standard feature. Dual controls for crew training are optional.

Saltzman said motion may be added to one or more models in the future, though the decision was made to eschew that on the initial models because of the high cost of realistic motion simulation.

“It was going to go against our mission of maintaining a price point that allows real access to this equipment,” Saltzman said. “The bottom line is, early on I felt that there was not a very faithful motion-based platform that could be both reliable and accurate at a price point we could touch.”

He noted, however, that the technology has come a long way even in the short history of the company, and motion remains a possibility.

“For it to be realistic and therefore beneficial beyond just kind of a gimmicky thing that can help sell a simulator, it really needs to be aerodynamically based,” Saltzman said. “I’m not convinced (motion is) what really matters. What matters is that more pilots can get in these things from the beginning of their training, and continue to have access.” 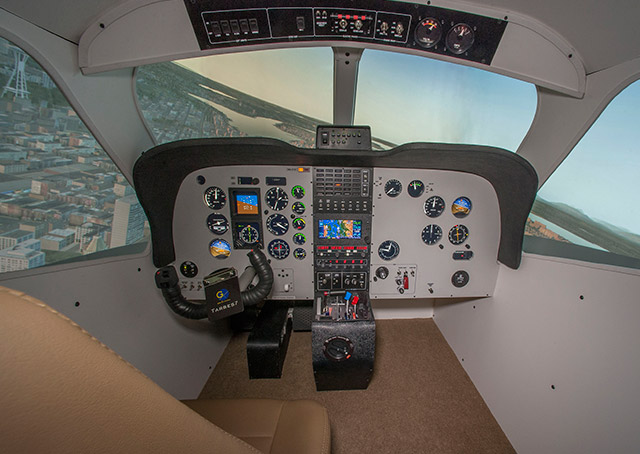