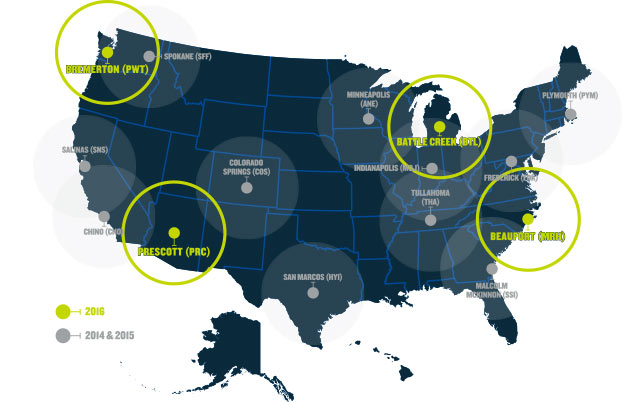 AOPA will host four regional fly-ins, all in new locations, in 2016. The events will be held May 21 at Michael J. Smith Field (MRH) in Beaufort, North Carolina; Aug. 20 at Bremerton National Airport (PWT) in Bremerton, Washington; Sept. 17 at WK Kellogg Airport (BTL) in Battle Creek, Michigan; and Oct. 1 at Ernest A. Love Field (PRC) in Prescott, Arizona. AOPA also will participate in other aviation events, including EAA AirVenture and Sun 'n Fun.

“We’ve been overwhelmed by the success of the AOPA Fly-Ins, so we’re excited to bring them to brand new locations, with new seminars, social events, and activities for 2016,” said AOPA President Mark Baker.

Since the AOPA Fly-Ins began in 2014, more than 27,000 people have attended and more than 4,000 aircraft have flown in to a dozen events in 10 states. AOPA has visited California, Colorado, Georgia, Indiana, Maryland, Massachusetts, Minnesota, Tennessee, Texas, and Washington. But the 2016 events will be the first AOPA has held in North Carolina, Michigan, and Arizona.

The 2016 locations were carefully selected from among numerous detailed proposals submitted by airports nationwide. AOPA has hosted a fly-in at its Frederick, Maryland, headquarters for the past two years, but has decided to visit a different mid-Atlantic location in 2016.

"We wanted to be able to visit another fun airport within reach of the greater Washington, D.C., area and meet folks who might not be able to make it to Frederick,” said Baker. “So for 2016, we’ll spend a weekend in North Carolina instead. But we also know our members enjoy coming home to headquarters, so we’ll definitely return to Maryland in the future."

For 2016, plan to join AOPA beginning the Friday night before each fly-in for an evening Barnstormers social event featuring food and entertainment. Free on-field camping will be available at all four 2016 fly-in locations, making it easy to come for the weekend.

On Saturday morning, come hungry. Each fly-in will begin with a traditional pancake breakfast cooked and served by local pilots and volunteers. Then spend the day getting up close to a wide range of display aircraft from classic airplanes to the newest models currently in production. You also can shop for everything from aircraft and avionics to pilot gear and attend seminars on a wide range of fun and educational aviation topics.

At each fly-in, Baker and other members of AOPA’s leadership team will provide an update on the association’s latest initiatives and advocacy efforts and answer audience questions about the issues that matter most to pilots.

For those who hold a pilot certificate but aren’t actively flying, each AOPA Fly-In will feature a free Rusty Pilots seminar. Pilots who complete the seminar can receive a logbook endorsement for the ground portion of the flight review, making this an easy way to get up to speed on current regulations.

All 2016 AOPA Fly-Ins also will feature a “You Can Fly” area where visitors can learn more about getting started in flying, joining or launching a flying club, growing the aviation community, and making flying more affordable.

Lunch also will be available at each event with a variety of offerings available from local restaurants.

You can begin planning your visit to one of the events through AOPA's 2016 AOPA Fly-In Web section, where you’ll find more information and a map of upcoming events. Members will be able to pre-register for events beginning in early 2016.

There’s no charge to attend AOPA Fly-Ins, which are funded by donations to the AOPA Foundation and through contributions from AOPA’s sponsors and partners.

For those who would like to exhibit at the 2016 AOPA Fly-Ins, additional information, including rates, is available now. AOPA Fly-Ins are a great way for companies to meet new, highly qualified prospects at locations not reached by other aviation events. Exhibitors should make their 2016 plans early as all exhibit space for 2015 fly-ins sold out.

AOPA has already begun exploring 2017 locations, and airports that want to be considered should email Chris Eads, AOPA director of outreach and events, for more information.

"We have many more states and communities to visit, so we are particularly hoping to receive strong proposals from airports in Florida, the Midwest, and the South Central United States," Eads said.