Get the app Get the app
AOPA Members DO more LEARN more SAVE more - Get MORE out of being a pilot - CLICK HERE
We will be performing maintenance on our systems Tuesday, 9/27, beginning at 12:00 A.M. ET and ending at 6:00 A.M. ET. During this time, you may experience intermittent service outages. We appreciate your patience.
News & Media Delta funds a Skyhawk for Michigan high school 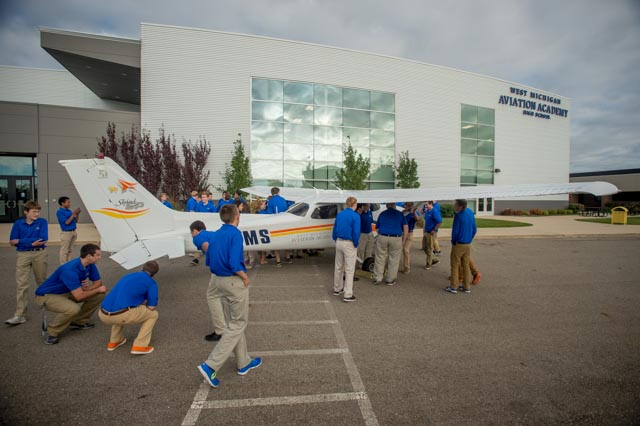 West Michigan Aviation Academy was surprised when the Delta Air Lines Foundation donated $150,000 on Oct. 1 for a white-and-gold 1999 Cessna 172SP that doubled the charter school’s aircraft fleet. “This has exceeded all of our expectations,” said Pat Cwayna, the CEO for the charter high school’s aviation program.

Cwayna explained how the school managed to score a second Skyhawk for their fledgling aviation program that has 18 high school seniors.

“Andrea Fischer Newman, Delta’s senior vice president of government affairs, was here as a regent for the University of Michigan when we announced a partnership with their engineering program. She asked us what they could do to help and I didn’t know what that meant so I said half-heartedly, ‘We could use a second airplane.’ When she saw what we were doing with aviation, she said ‘Wow!’ and took that information back to her folks.”

Cwayna said the school’s founder, Amway heir Dick DeVos, is a pilot and an aviation enthusiast. “We’re in our sixth year as a high school, grades 9-12, and we teach flight science. When we started the aviation program three years ago we had three students and now we have 18. Next year we’re hoping to have close to 30,” said Cwayna, who will share his aviation insights with other educational leaders at the AOPA Aviation Education Leadership Alliance symposium Nov. 9 in Lakeland, Florida.

The institution is recognized for its focus on aviation, science, technology, engineering, and math and is located at the Gerald R. Ford International Airport. The school launched in 2010 with 80 students and now enrolls 550 and has a waiting list.

Cwayna said the unexpected gift from Delta helps both the airline and West Michigan. “Along with their mission to give back to the communities they serve, Delta is very intentional about developing pilots for the future.”

Students get two hours of aviation classes each day in addition to the normal work load of a traditional high school core curriculum. Once they are airborne, students pay $140 per flight hour in the Skyhawks. “It’s not cheap but it’s fair in the market place, especially considering what it would cost to get a private pilot’s license,” said Pavey.

“The kids are the cream of the crop and they truly rise. It’s challenging to them academically and physically and there’s a maturity level that has to happen, too. Trust is earned through time, the daily victories, day in and day out. We don’t spoon feed them here.”

Indeed, the aviation academy’s vision is published on its website, setting a high bar. Safety is the first priority followed closely by professionalism and the pursuit of excellence.

“In general we like to think that we’re training private pilots,” said Pavey. “We do a lot of groundwork first and we’re not worried about commercial or instrument flying. So our safety-first motto says that in addition to safety, there’s always tomorrow. We particularly feel that way because we’re working with their mom’s and pop’s pride and joy. Like today for example, it’s supposed to be great weather but it’s fogged in. We want to keep the training going but we find that safety-first comes from living it every day.”

The school’s instructors aren’t in a big rush to get the potential aviators into an airplane cockpit. Pavey said the program first immerses students in ground school for a solid year, with time spent on desktop simulators and Jays, before transitioning to the growing fleet of Cessna 172s.

“In their senior year we want to fly them nice and steady,” he said. “We integrate Redbird hops [full motion simulators] into their Jeppesen flight classes, and on Fridays we do weekly wrap ups of what we learned that week. It’s a real squadron mentality.”

Two female flight students began training last year and Pavey said the school hopes to add more diversity to its ranks as enrollment grows. He said that high school challenges like girlfriend and boyfriend problems, distractions, and growing pains exist, but the youths in the aviation program are eager and very motivated. “It’s been an awesome experience working with them. Once these kids see that other kids can do it, they think, ‘Hey, if that kid can do it, I can do it too.’”