Get the app Get the app
Already a member? Please login below for an enhanced experience. Not a member? Join today
News & Media Bringing a B-17 back to life

Bringing a B-17 back to life Bill Albers recalls hearing stories about the Boeing B-17s that flew low over his homeland, the Netherlands, on a mission of mercy during the final days of World War II. The Allied Forces dropped 11,000 tons of rations to the German-occupied part of the Netherlands, which had been cut off from food and power by blockades.

The Flying Fortresses dropped rations from just 300 feet or even lower. The mission, which the U.S. forces called Operation Chowhound, brought food to starving Dutch citizens.

Seven decades later, Albers is part of a crew of volunteers working to bring a B-17 back to flying form. Champaign Lady is at Champaign Aviation Museum at Grimes Field Airport in Urbana, Ohio.

“It started off as a restoration,” Albers said of the project, which began in 2005. “I think it’s a misnomer. It’s a construction. This is new, an Experimental class.”

That’s because Champaign Lady is being pieced together with parts from other airframes—including a B-17 that crashed in Talkeetna, Alaska, in 1951—as well as parts built from scratch by the volunteers, who use specifications from the original drawings to guide them. The aircraft’s top gun turret was discovered under the porch of a Springfield, Ohio, resident’s home. “She thought it was a TV,” Albers said.

“I loved this country right from the start,” he said. 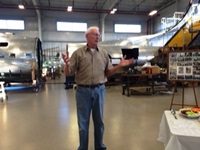 He feels a connection to the B-17 and believes that volunteering on Champaign Lady is a way of giving back to the country that “gave so much to so many.”

Albers happened to be at the museum one afternoon when a World War II veteran from Franklin, Ohio, stopped by Grimes Field to see the project. Bill Kohr was a turret gun sight specialist on the B-17 and B-24 Liberator. Kohr served in the 8th Air Force, 3rd Division, 34th Group—and he had been a member of the one of the crews who dropped food during Operation Chowhound.

Champaign Lady’s restoration may last until 2023. She is intended to be a flying aircraft, joining the museum’s fully restored North American B-25 Mitchell, Champaign Gal, and its Stinson 10A. A Douglas C-47, Fairchild F-24, Douglas A-26 Invader, and Beechcraft C-45 Expeditor are on static display. The museum is open Tuesday through Saturday, 10 a.m. to 4 p.m. Admission is free. To learn how you can support the B-17 restoration project, see the website.