Get the app Get the app
AOPA will be closed on Monday, May 25, 2020, in observance of Memorial Day.
Already a member? Please login below for an enhanced experience. Not a member? Join today
News & Videos GIFT Academy creates more pilots

Editor's note: The GIFT Academy’s fifth year of helping young women advance their flight training occurred at Franklin County Airport. An earlier version of this story listed an incorrect airfield and the number of years since the program began. AOPA regrets the errors. 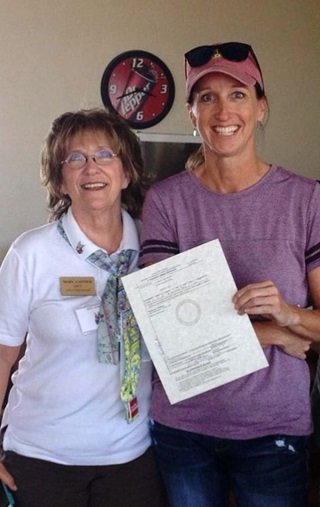 For the fifth year in a row, the Girls in Flight Training (GIFT) Academy in Vernon, Texas, capped a busy week of flying with success stories—this year, one solo and two checkrides.

Designated Pilot Examiner Mary Latimer conceived the nonprofit GIFT Academy in 2011, as an opportunity to help women advance in their flight training. Then as now, she invites women to come to Wilbarger County Airport in Vernon for a week of free ground and flight instruction. Participants pay for the use of an aircraft and for fuel. They stay for free at the airport and form a tightknit community over hot meals served in a hangar at the airport.

Along with creating a strong sense of community for its participants, GIFT Academy aims to help women dispel myths and fears related to flying.

After hosting the first GIFT Academy in late July 2011, Latimer subsequently moved it to the fall so that participants don’t have to fly in the heat of a Texas summer.

This year’s group of 18 women resulted in one solo and two checkrides—one private pilot and one commercial pilot. GIFT Academy accepts pilots of all experience levels.

“We almost had an IFR [checkride],” Latimer said. “The equipment change and new approaches were too much, too fast. Another day or two and she would have been fine.” That student plans to return to Vernon in November and finish her instrument training. Latimer has said in the past that the follow-up customers she gains from hosting GIFT Academy is a sizable benefit for the flight instruction business she operates with her husband, Lawrence Latimer.

“I am firmly convinced that this is a great way to jump-start a flight school,” Latimer said. “We are overwhelmed with students.”

Participants flew about 150 hours over the course of seven days, Latimer said. Two women arrived with the intention of obtaining some “pinch hitter” type training, but they left with plans to complete private pilot training, she said.