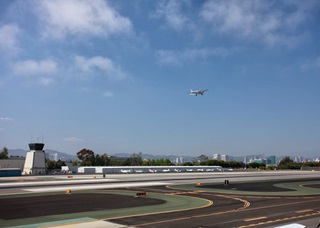 The Santa Monica City Council has made “securing local control of the city land occupied by the Santa Monica Airport” one of its top three priorities, ahead of such issues as addressing homelessness, strengthening infrastructure, and expanding on educational partnerships. The priorities, which were set following an Aug. 23 special meeting of the council, will guide how the city spends money and deploys staff.

Meeting participants were invited to provide input on how the city should prioritize among 12 possible issues, including providing world-class customer service to the community; establishing a new model for mobility; addressing homelessness; maintaining an inclusive and diverse community; securing local control of the city land occupied by the Santa Monica Airport; achieving water, energy, and climate change sustainability goals; safeguarding public buildings and cultural hubs; providing affordable community-wide high-speed fiber and Wi-Fi connectivity; strengthening downtown as a community hometown; expanding and improving the resilience of community infrastructure; taking community civic engagement to the next level; and building on the education partnership between local schools and colleges to emphasize Santa Monica as “a learning community.”

Following the meeting the council decided that its top three priorities would be diversity, mobility, and control of the airport property. It identified education and homelessness as its second-tier issues.

“It’s almost laughable that the city’s ongoing attempts to close the airport would take precedence over trying to address issues like homelessness, infrastructure, and education, but that’s essentially what the city council has decided,” said AOPA President Mark Baker. “Like all cities, Santa Monica has pressing issues to deal with for the well-being of its citizens. So it seems absurd to keep putting more resources toward trying to close an airport that delivers so much to the community.”

Some groups of city residents have complained about the results of the meeting as well as the organization of the meeting itself, which was held at 10 a.m. on a Sunday morning in an off-site location, rather than at the usual Tuesday evening time and city hall location designated for regular city council meetings.

Others have pointed out that, as the courts have repeatedly ruled, there are limits to the city’s ability to control what happens on the airport property.

Prior to the meeting, a group of nonpilot residents wrote to the city council with a reminder that any steps to gain control of the airport property must be subject to federal land transfer agreements and FAA grant assurances, both of which require the airport to remain an airport. The letter also pointed out that many city residents want to see the airport remain open and suggested the formation of an “Airport Working Group or SMO Task Force” to bring residents with diverse viewpoints together to work through the challenging issues facing the airport and community in a nonconfrontational environment.

Some city leaders have long tried to close historic Santa Monica Municipal Airport, which serves as a vital reliever airport for Los Angeles International Airport, delivers some $250 million in annual economic impact, hosts 175 businesses, and is responsible for 1,500 jobs in Santa Monica. The airport also has the potential to play a crucial role in enabling relief to reach the area in the event of a natural disaster and serves numerous charitable organizations that use general aviation to transport patients for specialized medical care, serve veterans, and deliver rescued animals to new homes.

While some in the city have proposed turning the airport property into a park, others have sought to develop some or all of the property. Most recently, the city sharply raised lease rates and cut terms for some businesses operating on airport property.