Get the app Get the app
Already a member? Please login below for an enhanced experience. Not a member? Join today
News & Media New effort launches to cut TFR violations

ForeFlight, Garmin, AOPA, and NORAD team up for safety

Concern about the rate of TFR violations led NORAD Commander Adm. Bill Gortney to reach out to AOPA in advance of the association’s recent regional fly-in at the Colorado Springs Municipal Airport in Colorado for help in expanding channels of distribution of TFR information and intercept procedures.

AOPA President Mark Baker; Craig Spence, AOPA vice president of operations and international affairs; and George Perry, senior vice president of the Air Safety Institute, met with NORAD leadership and representatives from several government agencies to discuss ways to help cut the number of TFR violations by GA pilots. One question raised by NORAD was whether major flight planning providers would be open to making AOPA’s TFR avoidance and intercept procedures available as a download.

“That seems like a reasonable request. Let me see what we can do,” Perry responded to NORAD.

AOPA then reached out to several major flight planning providers and posed the question. Flight planning app provider ForeFlight and aviation technology leader Garmin were the first to respond, and agreed to work on a solution. 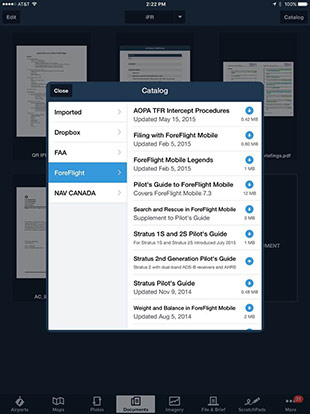 “Action on the problem literally happened within an hour of the meeting,” Perry said.

Since Sept. 28, ForeFlight has made available for download the NORAD TFR avoidance and intercept procedures card. The one-page kneeboard card informs pilots how to check for TFRs during preflight planning, directs them to other planning resources, and presents the intercept procedures used by NORAD and the FAA—including how an intercepted pilot is expected to respond. On Sept. 28 ForeFlight also released a blog update notifying subscribers that the information is now available.

Garmin informed AOPA that it would include the information in a future release of Garmin Pilot.

“This really is a win-win,” said Perry. “AOPA’s Air Safety Institute focuses not only on keeping pilots safe, but also helping them stay out of trouble. Flight planning providers' willingness to respond quickly and incorporate this information was just phenomenal!

“No GA pilot deliberately flies through a TFR, but it still happens about 500 times per year. Through making information available and having everyone (NORAD, AOPA, and flight planning providers) work together, we believe it will help decrease the the frequency of TFR violations.”

AOPA also provides several tools to help, including a TFR email alert system and flight planning tools. “Having ForeFlight and Garmin make information more readily available to pilots is a good thing.” Perry said. “The world has changed for GA since 9/11. As pilots we have to do our part to keep the skies safe.”

Perry also noted that trends in TFR violations may vary but the underlying reasons are often the same. “A typical TFR violation involves a pilot who has not performed adequate preflight planning, who is flying under VFR, not using radar flight following, and without such in-cockpit aids as a portable tablet equipped with Automatic Dependent Surveillance-Broadcast In information.”

“Enhancing the availability for pilots to access TFR and safety data should increase the likelihood that a bad situation can be avoided,” said Baker. “It’s great when AOPA’s Safety and Government Affairs divisions are able work so closely with the military and commercial vendors to find commonsense, simple solutions that improve safety.”