Get the app Get the app
Already a member? Please login below for an enhanced experience. Not a member? Join today
News & Media Daher Introduces New TBM 930

Pilots wanting a new TBM now have two choices: the TBM 900 and the newly introduced TBM 930. The public got its first look at Daher’s new TBM 930 at a ceremony at the TBM factory in Tarbes, France, April 5. Later this week, a new TBM 930 is expected to go on display at the Sun 'n Fun International Fly-In and Expo in Lakeland, Florida.

New TBM 900s and 930s—which share the same performance specifications—incorporate a number of significant safety features. These include electronic stability and protection (ESP) modes designed to keep the airplane within safe pitch and bank limits; an emergency descent management (EDM) mode that will automatically bring the airplane to a safe altitude in case of depressurization; an angle of attack (AOA) sensor and primary flight display AOA thumbnail view; new voice alerts for stall, oxygen mask use, and other warnings; plus Garmin’s Flight Stream 210 Bluetooth linkup that connects iPads with the TBMs’ glass cockpits. This allows flight plans to be wirelessly sent from mobile devices to the cockpit, as well as streaming of Automatic Dependent Surveillance-Broadcast data such as weather and traffic information. The AOA and ESP features are standard in both the TBM 930 and 900. An AOA/ESP retrofit package is being developed for in-service TBM 900s.

The 900 and 930 voice annunciations of critical conditions are designed to create a heightened sense of urgency. Simple chimes or tones are no more. These include “stall, stall,” “overspeed, overspeed,” “landing gear,” plus “use oxygen mask” callouts for critically high (above 14,900 feet) cabin altitudes. The latest version 15 software for the Garmin G1000 will include these aural warnings and will be provided free of charge to all in-service G1000-equipped TBMs, Daher said. This amounts to approximately 400 TBMs.

Stick shakers, which physically shake to give pilots warning of an impending stall, will be installed in TBM 930s beginning with serial number 1111, which should have already been produced by press time. New TBM 900s will have factory-installed stick shakers beginning in the second half of 2016. Daher said that stick shakers will be available as a paid retrofit to all G1000-equipped TBMs, and that it is working on a shaker retrofit for pre-G1000 airplanes, including TBM 700s. 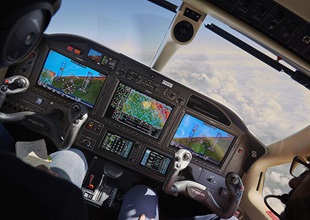 The TBM 930’s strongest feature is its Garmin G3000 glass cockpit, complete with dual GTC 580 touchscreen controllers. The G3000 has three high-resolution, 12-inch display screens, which can be split to show a total of six different screenviews. The touchscreen controllers, mounted on the center subpanel, each have menu selection buttons that let pilots configure the primary flight display, multifunction display, and NavComm frequencies according to their preferences.

For example, to call up a Jeppesen ChartView or Garmin FliteChart electronic chart, press the MFD line select key on the GTC 580. This brings up a screen full of icons, one of which is “Chart Selection.” Tap on the icon and up pops a list of chart options—among them approach and departure charts. Make a choice, and a scratchpad appears at the bottom of the touchscreen. Now you can use your fingers to pinch the chart to a smaller or larger size, or drag the chart to examine a certain portion of the chart more clearly. To split the display screens, you use a rotary knob to select the desired screen, then press the “Split” icon.

Other icons on the controllers’ MFD home page include: Map, Flight Plan, Wx, TAWS, Direct, Procedure, Aircraft Systems, Services (for Iridium telephone connectivity), Utilities, Speed Bugs, Waypoint Info, and Nearest. Systems synoptic pages are available, as is a menu that allows you to disable the ESP—should you need to practice unusual attitudes in training situations. 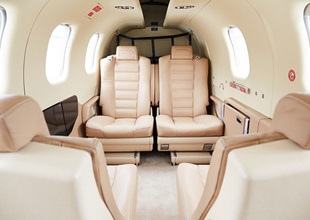 Daher decided to continue offering the TBM 900, knowing that some customers favor the G1000’s keypad-centric operating format. “We want to continue to produce the G1000 models, understanding that this system has its fans, but at the same time we want to offer the G3000 as a natural step up,” said Nicolas Chabbert, senior vice president of Daher Airplane Business Unit and CEO of Socata North America.

For 2016, buyers will have their choice of eight leather color patterns. For an additional $5,000, you have your choice of 32 additional color schemes, including the “Diamond black” edition, with its black leather seats and red stitching.

AOPA Pilot Editor at Large
AOPA Pilot Editor at Large Tom Horne has worked at AOPA since the early 1980s. He began flying in 1975 and has an airline transport pilot and flight instructor certificates. He’s flown everything from ultralights to Gulfstreams and ferried numerous piston airplanes across the Atlantic.
Go to Thomas A. Horne's Profile
Topics: Turbine Aircraft, Sun n Fun, Events