Get the app Get the app
Already a member? Please login below for an enhanced experience. Not a member? Join today
News & Media Solar Impulse in California

Bertrand Piccard stepped out of the cockpit and raised his hands high, thanking the crowd gathered at Moffett Federal Airfield in Mountain View, California, for the warm welcome. Piccard was greeted first by his wife (who is a member of the Solar Impulse team), followed by co-founder André Borschberg (who had a sponsor’s champagne in hand). The final leg of the solar-powered airplane’s Pacific crossing had lasted 62 hours, 29 minutes, covering 2,810 miles from Hawaii, and arriving at 11:44 p.m. local time on April 23.

Aloft during Earth Day (April 22), Piccard chatted with U.N. Secretary-General Ban Ki-moon, who has also made climate change a priority. Google co-founder Sergey Brin stopped by to greet Piccard and congratulate him on a “beautiful landing” and a “tremendous flight.”

Many of Northern California’s less well-known faces pressed against ropes as Piccard arrived and stepped out of the 5,100-pound aircraft with the wingspan of a jumbo jet, powered with batteries by night that are charged during the day by more than 17,000 solar cells. The team broadcast large portions of the latest flight live, and an online logbook offers the curious a vast trove of details, videos, and photos.

The latest flight launched April 21 from Hawaii after months of delay that resulted from battery issues encountered during Borschberg’s record-breaking voyage from Japan. The project, created to raise global awareness of clean energy and to build support for further development (while testing technology along the way), plans much shorter legs in the days and weeks to come, though the details of the remaining itinerary were not to be found during the most recent visit to the project’s website. The original plan called for stops in Mountain View, Phoenix, and New York, though a map posted on the project’s photo feed shows two additional U.S. stops at unspecified locations between Phoenix and New York. Press representatives did not respond immediately to an email inquiry requesting confirmation of details and dates.

The journey began in March 2015, and Borschberg and Piccard have been alternating legs, including the longest solo leg ever flown, in terms of duration: the Japan-to-Hawaii trip across the Pacific, which also claims a record for the longest solar flight to date. The next two, at least, will be considerably shorter. Piccard, as he prepared to land April 23, joked over the radio that “I could continue all the way to New York,” which is certainly true of his zero-fuel aircraft, the endurance of which is theoretically infinite, barring electrical issues. 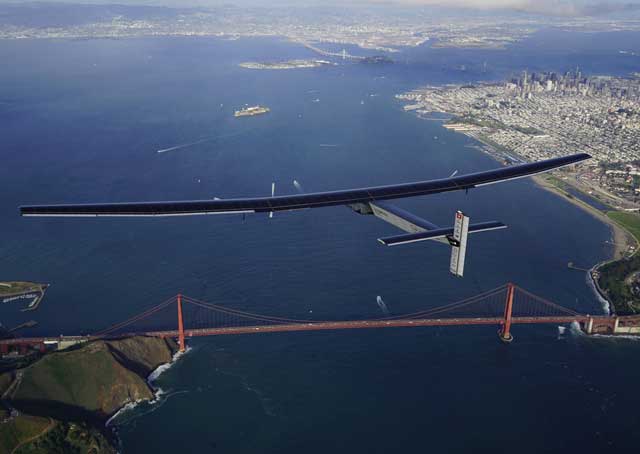 Editor-Web
Editor-Web Jim Moore joined AOPA in 2011 and is an instrument-rated private pilot, as well as a certificated remote pilot, who enjoys competition aerobatics and flying drones.
Go to Jim Moore's Profile
Topics: Technology, Travel, Around the World Flight