Drone show is all business 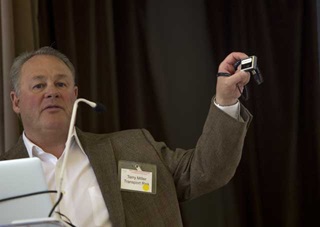 The Small Unmanned Systems Business Expo, organized by sUAS News, began its fourth year April 27, an intimate gathering of a couple of hundred people—many of them with prominent roles in the building and shaping of a still fledgling industry—at the Golden Gate Club at the Presidio in San Francisco. Nearly in the shadow of the famous bridge that could be clearly seen through huge picture windows, the packed schedule of speakers at the podium and conversations in the hallways revealed a larger picture of an industry struggling to shed many burdens.

One of these burdens is waiting for Part 107, the final rule expected to arrive before summer that will clarify and codify commercial drone operations. The regulation will remove much of the uncertainty that has plagued the industry, though its delayed arrival (and the cumbersome and expensive Section 333 petition process that has in recent years served as a temporary path to doing business with drones) is far from the only thing holding the industry back.

Patrick Egan, an industry veteran not known for sparing criticism, runs the conference, which began April 27. Egan was the first speaker to take the small stage in a room of many seats, half of them full (Egan said 220 had registered in advance, though others showed up unannounced) and lamented “many losses” he has seen in 12 years of participating in and closely observing the industry. He has watched more than one drone business go bust, money lost, and hopes squashed.

“The real sad part of that is they watched illegal operators go out there and make a boatload of money,” Egan said. “That’s the real sad part. There’s been a lot of people that have been hurt by this.”

Jeffrey Antonelli, a Chicago lawyer who has built a drone practice, said his firm has provided initial consultations to more than 800 potential clients interested in securing FAA approval (the aforementioned Section 333 exemption) for commercial drone operations, but about seven out of every eight of those potential clients have walked away—most of them dissuaded by the FAA pilot certificate requirement (which may ease, to some degree, when Part 107 is finalized). Others, including many of those who already hold a pilot certificate, are dissuaded by the high cost of insurance, legal services, and a cumbersome approval process at almost every level. The FAA has been inundated with more than 12,000 Section 333 petitions to date, and responses can take several months; site-specific authorizations for those who already have their “333” can take two weeks to two months. Those who invest the time and money needed to follow the rules (and who forgo missions requested by clients with tight deadlines or requirements that fall outside of what the FAA has approved) must then compete with illegal operators who seize opportunity without regard to compliance.

“I hear this all the time,” Antonelli said, citing stringent rules applied to drones flown for commercial purposes as part of the problem. He compared it to the days of Prohibition, when the outright illegality of alcohol combined with public appetite for the product to spawn an underground industry of bootleggers and bathtub gin. Much the same thing, he said, has happened with drones: “The bar’s been set so high, it’s encouraged people to slide right underneath and not do anything.”

Not every presentation was quite so laced with pessimism. Terry Miller, president of Transport Risk Management Inc., an insurance broker who has written many drone policies for commercial operators, came with a solution in hand, literally, to a problem that has been driving up costs for the young industry. Miller held up a 1.4-ounce device that can collect and  transmit data from any drone (or virtually any other vehicle) in real time, beaming it back to the cloud. It allows Miller, who has written thousands of drone insurance policies, to monitor his clients’ drones in detail, in real time (when connected to the network) and give Miller and the insurers who have written policy details on everything from locations flown to the forces involved in a crash or hard landing. The intrusive approach reduces costs  for operators as well as insurers, in part because it allows the owner of multiple aircraft to obtain a single policy that covers all, and pay for only the coverage they need and use, because the coverage is attached to the device more than the drone, and the device can be moved from one drone to another. The device and associated electronics also can allow the client to update coverage as needed, perhaps increasing liability coverage for a single mission flown for a client with high liability coverage requirements, then revert back to the standard policy with no phone calls required. Miller said those who fly by the rules, and best practices, will be rewarded.

“We can see how you’re operating,” Miller said. “If you’re professional, you’re safe, it’s going to cost you less money.”

Telematics, the term for this kind of device that merges telecommunications and information exchange, will reduce the cost of insurance for responsible operators by allowing underwriters to price policies based on risk and reduce or eliminate the cost that all policyholders pay toward insurance fraud, or the bad acts of a few in the risk pool. Or high-risk actions.

Adapted for drone use for the first time by Dromatics, the technology allows insurance companies to gather precise data. (Customers also can access the data via the cloud and use the information for fleet management, maintenance, and other purposes.) The technology also allows for much more specific pricing, Miller said, potentially leading to significant savings for an operator who may own multiple systems but uses only one at a time.

Miller said a similar approach to auto insurance has reduced automotive accident rates and associated costs in Europe, and in the drone world it will “eventually” lead to “scoring” of individual operators, “and it’s going to make more professional operators, I promise you.”

Miller said using the miniature devices, which can be attached to any drone with a simple fastener, will reduce the cost of insuring drone operations significantly by eliminating the need to cover a drone year round if it is only used for a few days, and by allowing insurers to price policies based on very specific operational details.

“Most people are excited about that: You actually pay for what you use,” Miller said.

The device can monitor drones in transit as they are shipped to and from filming locations, and send notification when the case is opened—by authorized persons, or otherwise. It also can be used to monitor and improve maintenance in a large fleet, and trigger alerts and initiate claims if a crash is detected. If a drone has flown out of sight, Miller said, the claim process may begin even before the pilot knows the drone has crashed.

Insurance issues also shaped the conference offerings, and forced improvisation after approval to set up a drone cage was foiled. Local operators who had planned to use a caged drone to capture “dronies” (a variation on the “selfie” photo) of attendees in the Presidio improvised, and a DJI Phantom was instead mounted on a telescoping pole, and, thus secured, legal to “operate” without insurance or government approval.

This decidedly low-tech approach offered an amusing counterpoint to the many discussions of rapidly evolving technology that is increasing the capability of drones to gather data and operate safely. For example, drone-sized LIDAR sensors that can create precise maps hold promise to allow drones to detect-and-avoid other aircraft and objects, and can even penetrate to the lower levels below a rainforest canopy.

Retired U.S. Air Force Maj. Gen James Poss, director of the FAA Center of Excellence for UAS Research had to talk fast to explain the broad strokes of the sprawling collaboration between government, academia, and industry to research and validate myriad aspects and elements of drone integration. Nancy Egan (not related to the conference organizer) is the general counsel and executive vice president for policy at 3D Robotics, a leading drone maker. She recounted her experience as co-chair of the FAA Aviation Rulemaking Committee recently tasked with recommending a new regulatory framework to facilitate operations close to people without creating unacceptable risk. Allowing such operations would remove a significant limitation on and impediment to the effective use of drones.