Get the app Get the app
Already a member? Please login below for an enhanced experience. Not a member? Join today
News & Media Pelton: 'Best Oshkosh ever, ever'

Pelton: 'Best Oshkosh ever, ever'

Editor's note: This article was updated with final attendance figures released by the Experimental Aircraft Association Aug. 2.
The Experimental Aircraft Association’s annual aviation gathering in Oshkosh, Wisconsin, closed with a flourish of activity July 31. The Canadian Snowbirds drew hearts in the sky over Wittman Regional Airport and the Commemorative Air Force’s B-29 bomber "Fifi" celebrated its seventy-first birthday with cake and recognition on Boeing Centennial Plaza, temporarily named for the bomber manufacturer’s own 100th birthday. 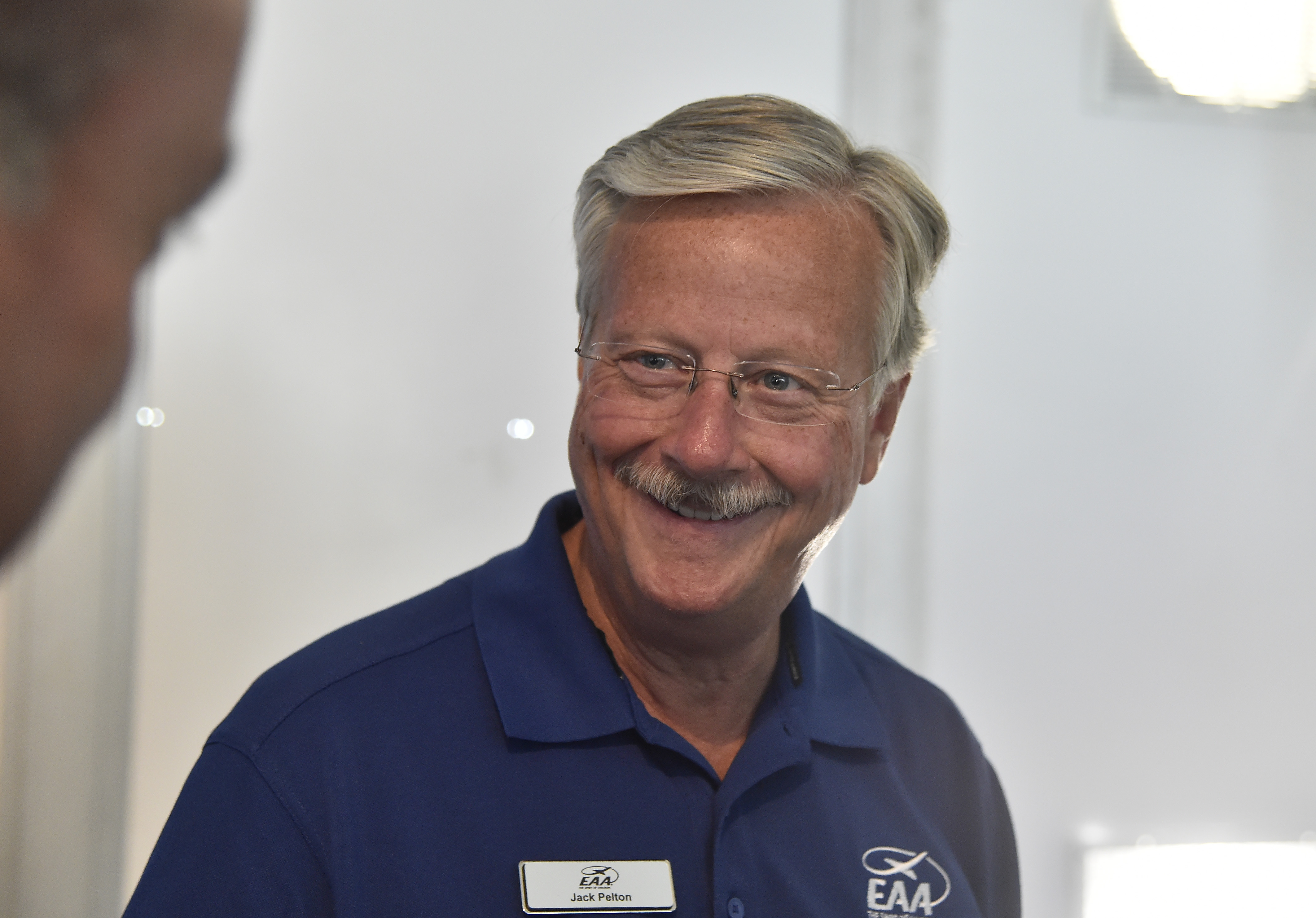 The passenger and cargo aircraft maker had a 737-500 parked nearby to help honor the Washington-based builder’s century of aviation fabrication. Throughout the week Boeing taxied its latest hardware into and out of the show’s center, including a 747-8 Cathay Pacific cargo hauler, which shared ramp space with F/A-18 and F-16 fighters, the Snowbirds CT-114 Tutor, and helicopters from the U.S. Coast Guard, which was celebrating its own centennial of aviation.

Jack Pelton, EAA’s CEO and chairman, proclaimed the week an “unbelievably successful AirVenture.” He said that by July 30 there were approximately 14,300 aircraft movements at Wittman Regional “and that allows us to continue to rightfully claim the world’s busiest airport.”

A “cornerstone activity” for EAA was the Pilot Proficiency Center, Pelton said, with its 12 Redbird flight simulators and two full-motion simulators. Participants could choose from an array of 32 VFR and IFR flight scenarios to sharpen their flying skills. “Our goal was to have 5,000 through the center,” said Pelton. The proficiency center with one-on-one sim-based flight instruction and popular technical talks “will be a permanent facility for us,” he added. Pelton said all of the Tech Talks were sellout crowds, “so I think we are onto something.” 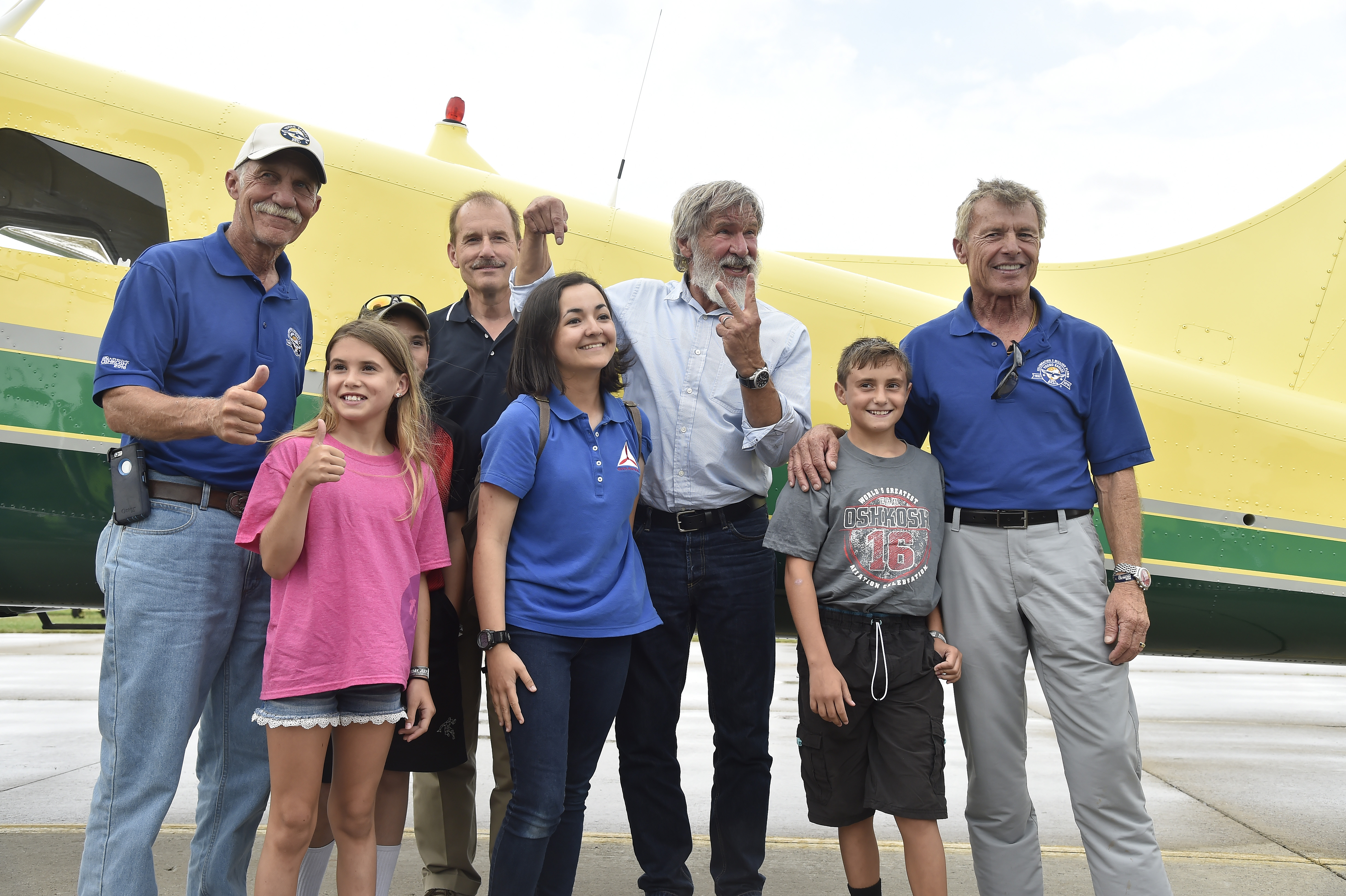 The teen was thrilled after the Star Wars actor and former Young Eagles chairman cranked up his yellow-and-green de Havilland Beaver as she occupied the right seat. Gawthrop immediately posted a selfie to her social media channels.

During the recognition, veteran airshow pilot Sean D. Tucker provided a fitting escort over Wittman field as he flanked Ford in a red Oracle Extra 300 with airshow smoke drawing attention to the feat. Tucker, the current Young Eagles chairman, gave a lift to Owen Wrolstad, 13, who was barely off the magical mark at 1,999,999. After the flights, Ford and Tucker walked off the field together, laughing and patting each other on the back.

Aviation legend Bob Hoover, a friend of both Ford and Tucker, was on hand for a special Warbirds in Review session where he was greeted with a standing ovation. The test pilot and airshow performer recently received a national honor after Hoover’s life-size bronze statue was installed at the National Air and Space Museum’s Steven F. Udvar-Hazy Center in Chantilly, Virginia.

Pelton said the Martin Mars water bomber moored at Lake Winnebago “was a huge success” in its several airshow appearances before it hit a submerged object that pierced its hull during a precautionary landing. The Mars was manufactured in 1946 as a troop mover. It was clearly a crowd favorite during the daily airshow as it dropped its massive payload of 7,200 gallons of water on blazes intentionally set near show center.

The Oshkosh Northwestern newspaper reported that the aircraft was performing an emergency water landing for an engine problem when the incident occurred after the July 29 airshow.

As events at the nearby seaplane base continued, the aircraft was seen noticeably listing left with its far right engine cowl removed while two workers pumped water from the craft near an open cabin hatch. “We’re hoping they can get the repair done and get out of here on schedule” on Monday, Pelton said.

For most of the week a Lockheed C-5M Super Galaxy cargo hauler operated by the Wisconsin Air National Guard beckoned airshow attendees to take a closer look at the behemoth. With its hinged nose cone tipped open and its rear cargo ramp lowered, aircraft enthusiasts wandered from the front to the back and Lt. Col. Steve Lisek of the 312th Airlift Squadron greeted them near the flight deck. Lisek, who also flies a Cessna 172 and a Piper Warrior, said the enormous troop and cargo mover’s flying qualities are similar to a Cessna “because designers wanted it to feel familiar” to general aviation pilots entering military service.

Thousands of airshow attendees and AOPA members stopped by the AOPA campus near the Brown Arch to compliment the association for its ongoing advocacy efforts on third class medical reforms, which were signed into law by President Barack Obama July 15. With their mood uplifted by victory in the long-fought battle, many chatted with AOPA President Mark Baker after an ice cream social and Pilot Town Hall to thank him and the association. Topics besides medical reforms included airport fees, aviation fuel measures, and other advocacy issues.

The AOPA Sweepstakes 172 drew a steady crowd that inspected the Cessna’s Garmin G5 electronic flight instrument and other panel upgrades. The device can serve as a primary attitude indicator for 562 makes and models of certified aircraft, said AOPA technical Editor Jill Tallman, who flew the AOPA Sweepstakes 172 to the show. A pair of Bede BD-5J microjets parked near the program pavilion drew double-takes from attendees, and the association’s main tent provided a welcoming environment for airshow watching as well as an open door for a variety of medical, insurance, and safety services.

The Snowbirds helped close out the week on a high note, appearing at AirVenture for the first time in 33 years. The active-duty precision aerial demonstration team performed an extended aerial ballet in their distinctive red-and-white two-seat jets.

The gregarious Canadian ambassadors demonstrated a high level of teamwork and timing. They energized the crowd with echelon, triple, and dual formations, drawing applause and awe as they skywrote circles and hearts above the crowd July 30.

It was the “best show we’ve performed all year,” a Snowbirds spokesperson told EAA communications director Dick Knapinski, who confided that “they’ve been a blast” to have at AirVenture.

In fact, just a few hours before their event-closer, two of the red flight-suited Snowbirds were spotted marshallng aircraft to the departure area, waving and chatting with airshow attendees along the way.