During a summer flight academy for Virginia high school students, 16-year-old Joel Cihak lifted off for his first solo flight with less than six hours logged. New London Airport’s Runway 18 disappeared beneath his wings as Cihak piloted the blue-and-white Cessna 150 from the downsloping country airstrip. He climbed into a blue sky dotted with cotton-ball clouds as his mom and dad clapped and cheered from the ramp below.

A handful of red-shirted Liberty University aeronautical school instructors and fellow solo campers held up hand-numbered signs proclaiming Cihak’s first solo flight a “10” as he taxied past for another rotation, mirroring scores for Olympic competition.

His parents took photos, and students shouted encouragement as the little aircraft lifted off again for round two. Cihak was one of six high school students—five boys and one girl—who participated in Liberty University’s inaugural New Horizons Solo Camp Aug. 2 through 13. It was created to complement the faith-based university’s high school outreach program that has steered students toward aeronautical careers since 2012. 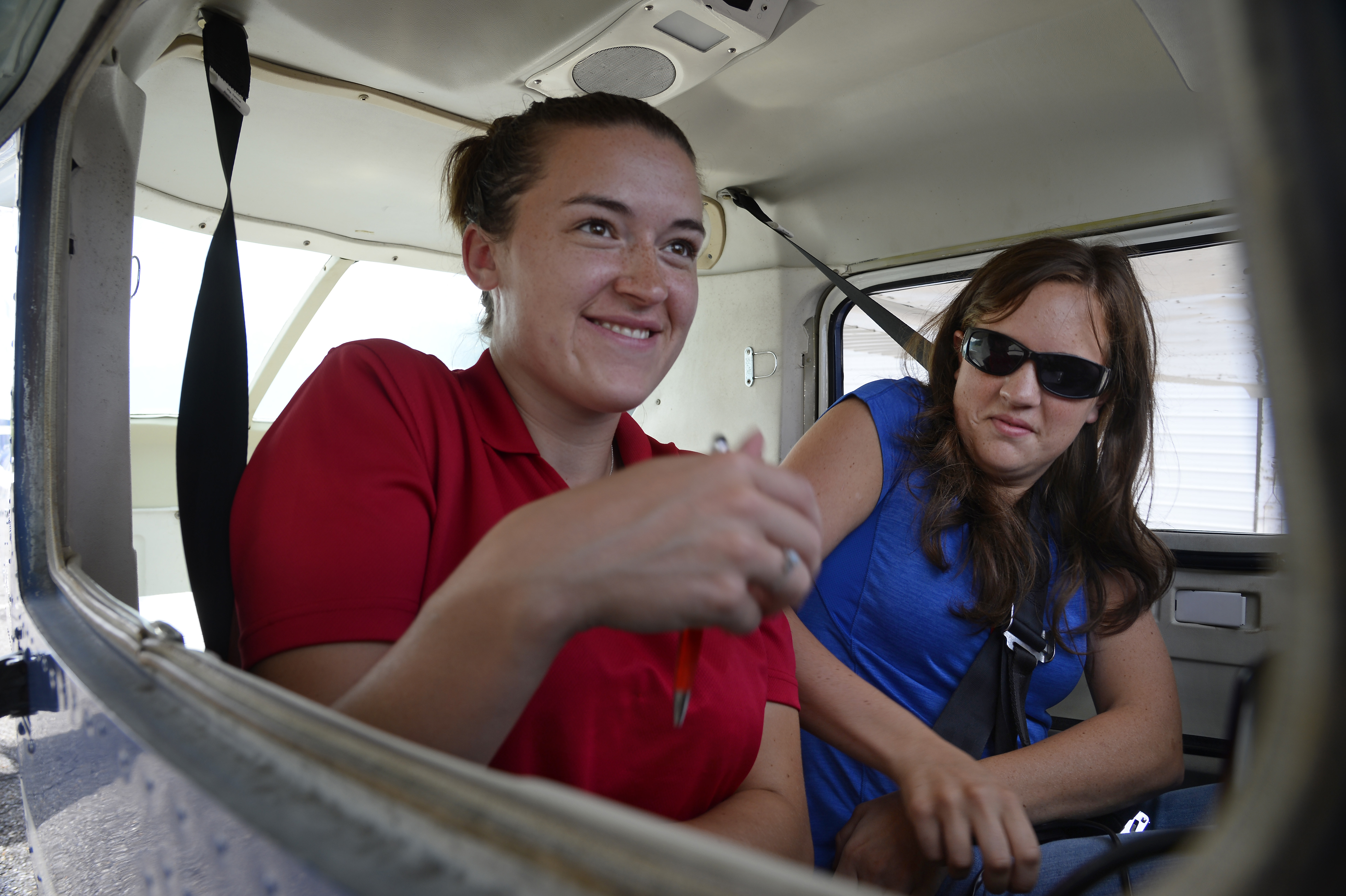 Liberty University flight school instructors numbered their campers one through six and rotated them through a schedule that included ground school instruction, simulator time, and seat time in one of two Cessna 150s normally used for flying tournaments.

The university’s training fleet of Cessna 172s fitted with Garmin G1000 panels, Piper Arrows, and Seminoles were being used by the university’s 360 aeronautical students operating from the school’s towered main airport while the 150s flew laps around the pattern at New London. Liberty also offers long-distance learning with an affiliate program where college flight program students can train with local instructors in other regions of the country and complete the curriculum’s online requirements. 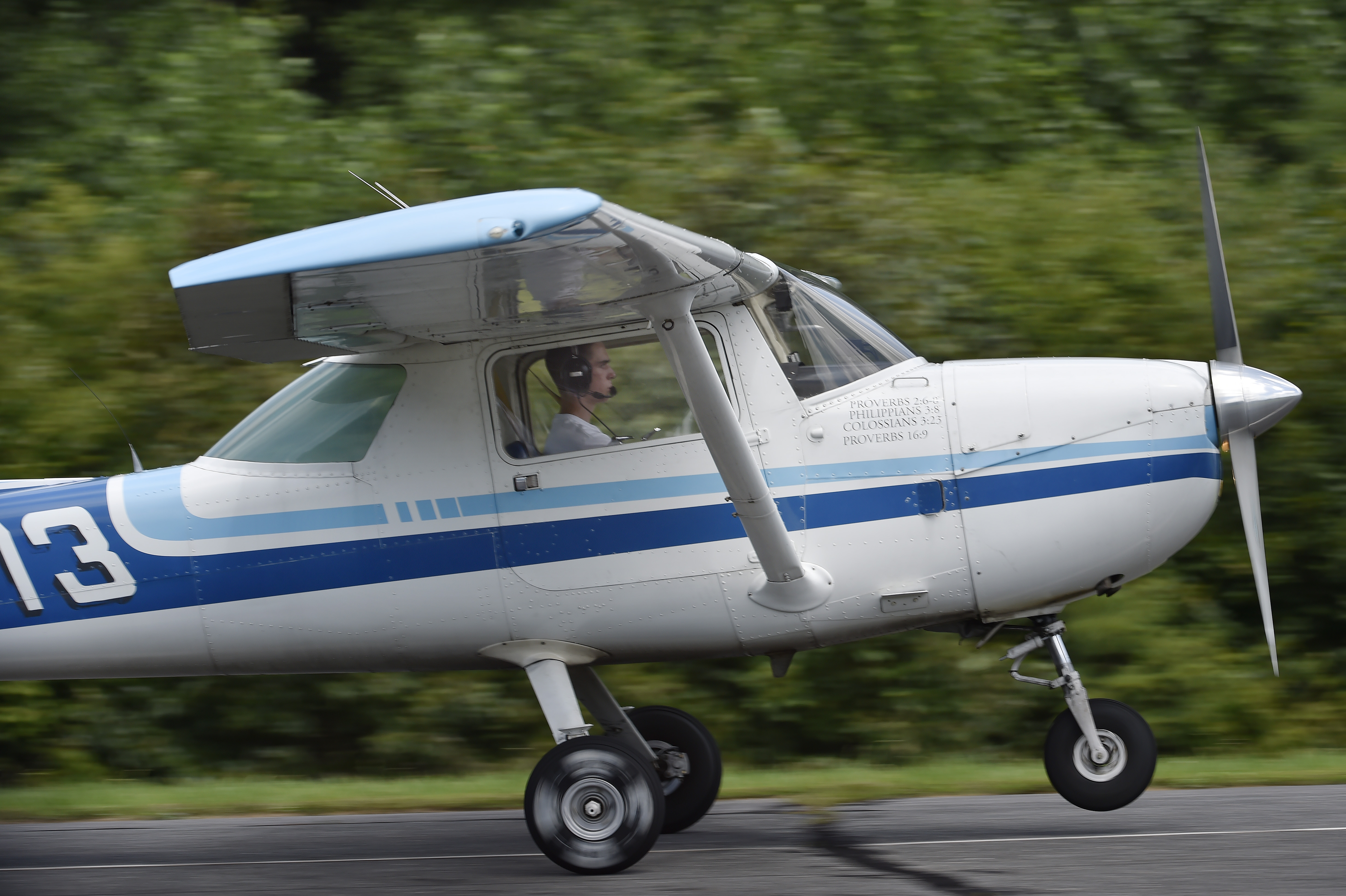 “I told them Monday night that summer vacation is over and you’re back in school. It’s aggressive but it’s worth it," he said. "I told them that at the end of 12 days you can stand up and say, ‘I am a pilot.’”

The camp students worked with the same instructors and flew the same aircraft over the course of the session for familiarity. For additional evaluation they did, however, fly with another instructor at least once prior to soloing.

At any one time, two students were paired up with their instructor working on ground lessons; practicing approaches, turns, and descents with one of Liberty’s FlyThisSim training devices; or flying the pattern in a Cessna Commuter with passages from the Bible stenciled on its nose. 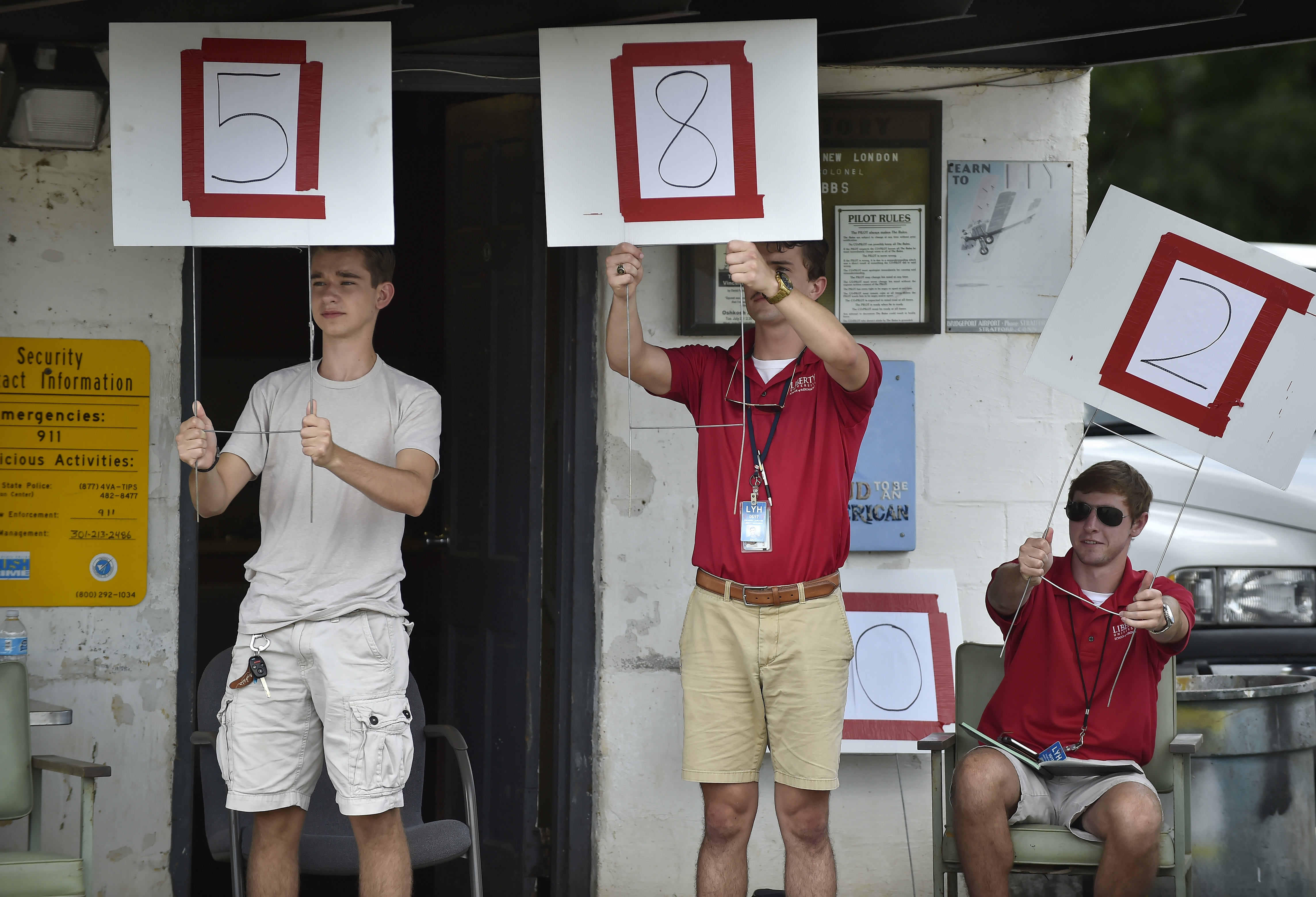 Mechanical issues delayed the first day’s planned flights, and Virginia’s summer weather can be tricky, so students generally opted to fly first thing in the morning before thunderstorms threatened the valley airstrip, or in the late afternoon. Tony Cihak said he budgeted the camp for two weeks to allow for weather or equipment delays but by mid-program it was “doing so well that we’re ahead of schedule.”

Instructors Chris Cartwright and Alicia Isacson paid close attention to making the experience fun while being mindful of temperatures climbing well into the 90s.

“It can get really hot and humid out here and for a young high school student and we don’t want to make them sick,” said Cihak. “We want this to be a really good experience for them.” 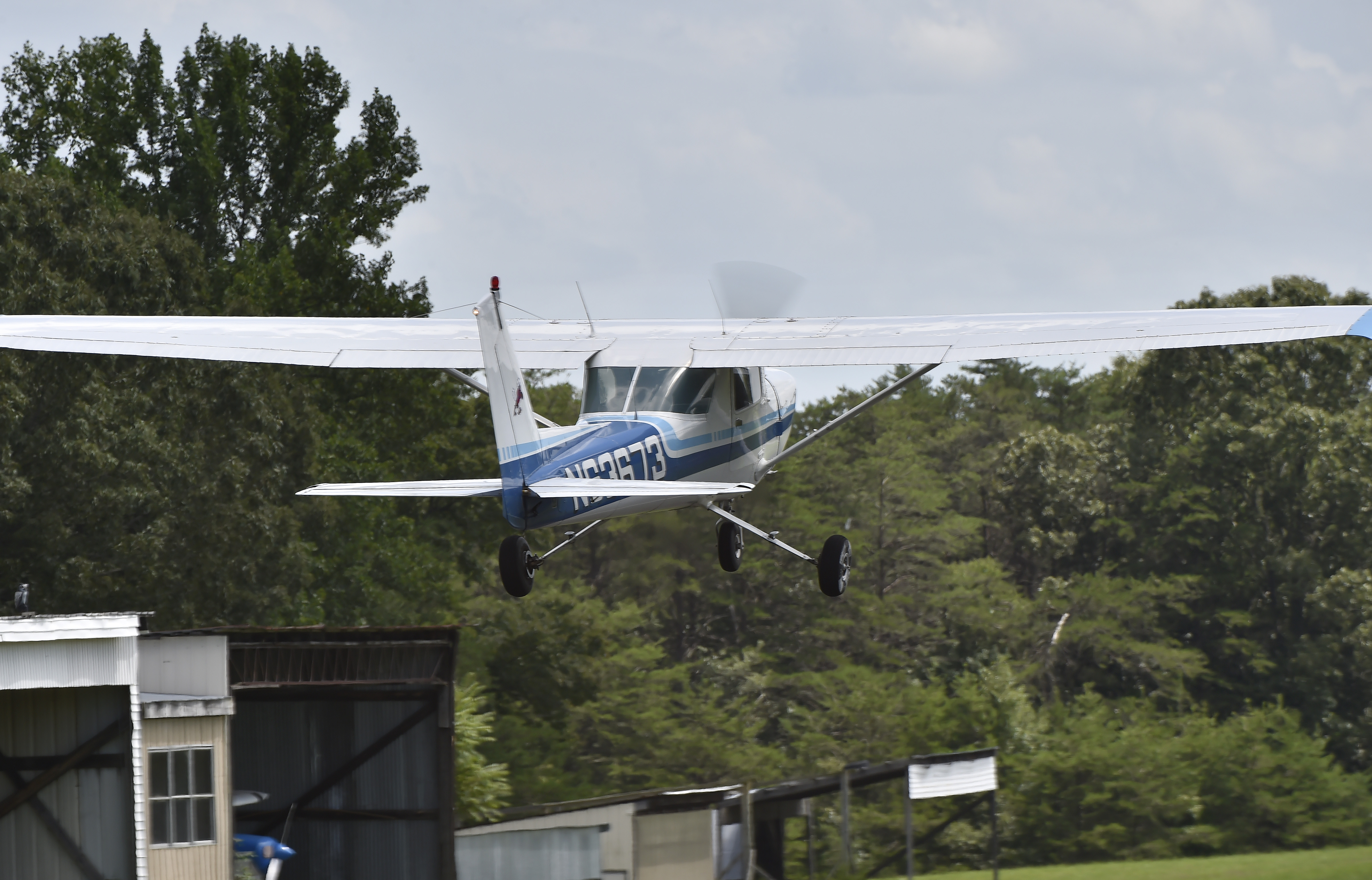 Lunchtime was spent in the cool confines of a classroom going over numbers and regulations, and practicing on the simulator to build confidence for the real thing while heat waves rolled off the tarmac outside.

Jim Molloy, the Christian university’s dean of aeronautics, said Liberty recognized a need to expand its flight operations and its reach from the nearby Lynchburg Regional/Preston Glenn Field Airport at about the same time the user-friendly New London Airport recently came up for sale.

“We bought what we call an old country airport with a 40-foot-wide runway on it and it’s one of the best things we did,” said Molloy. “We’re about three or four miles outside of Class D airspace and it gives us options to expand our programs.” 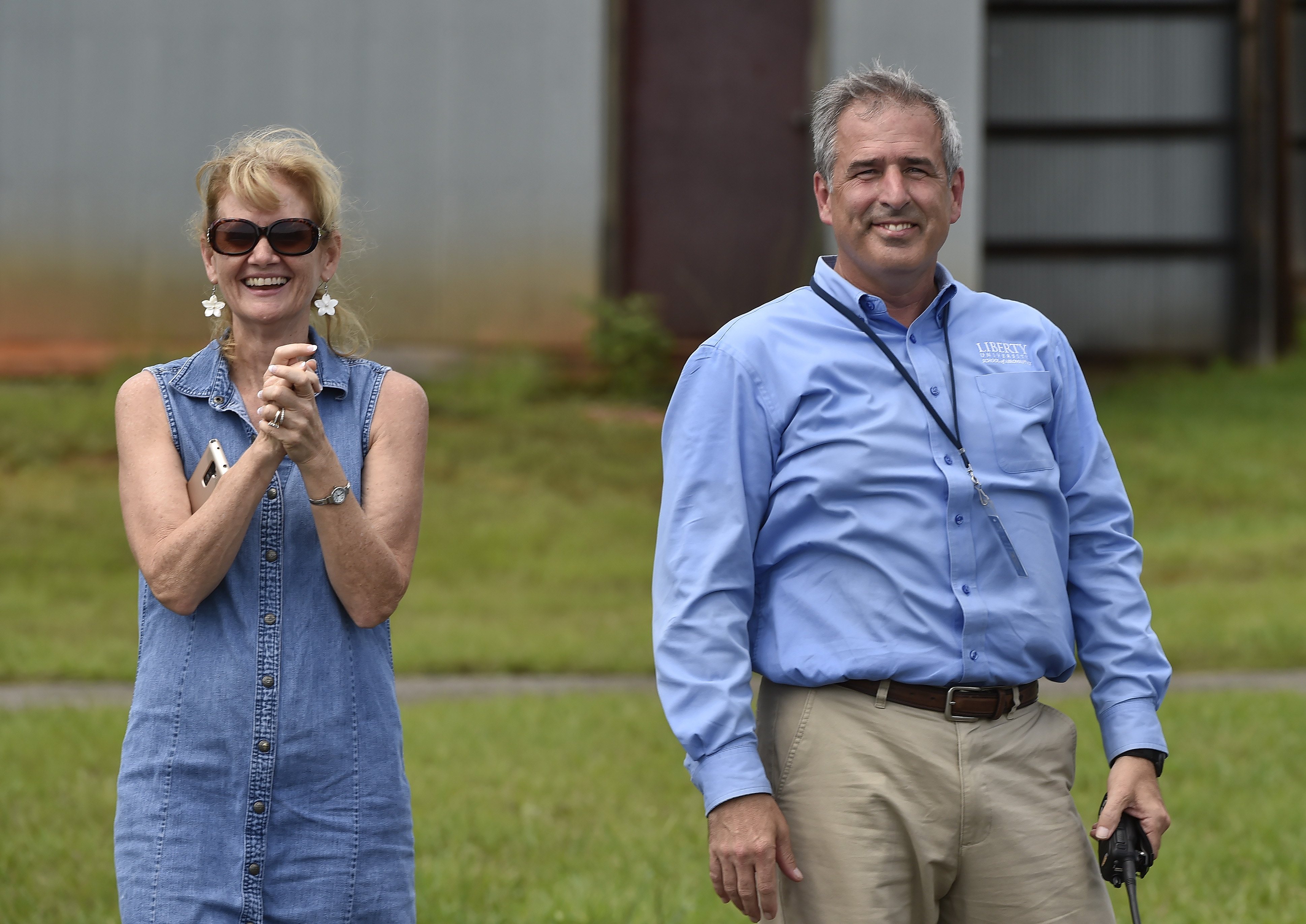 The New London Airport acquisition helped cement the plan for the summer solo camp, and also allowed the university to expand its unmanned aircraft systems courses.

The small airport with its Bent Prop Canteen building and throwback charm “provides a convenient lab” for science, technology, engineering, and math (STEM) programs, Molloy said. The airfield actually began life in the 1950s as a drag strip and morphed into a regular hangout for aviators.

By the end of the flight camp, all six students had completed their solo flights, all needing less than 10 hours to be signed off. Cihak soloed with 5.4 hours, Boyer soloed at 8 hours, and Bell clocked in at 9.9 hours. Molloy said the solo academy was so successful that he was was looking at logistics for "more than one" solo camp in the summer of 2017. 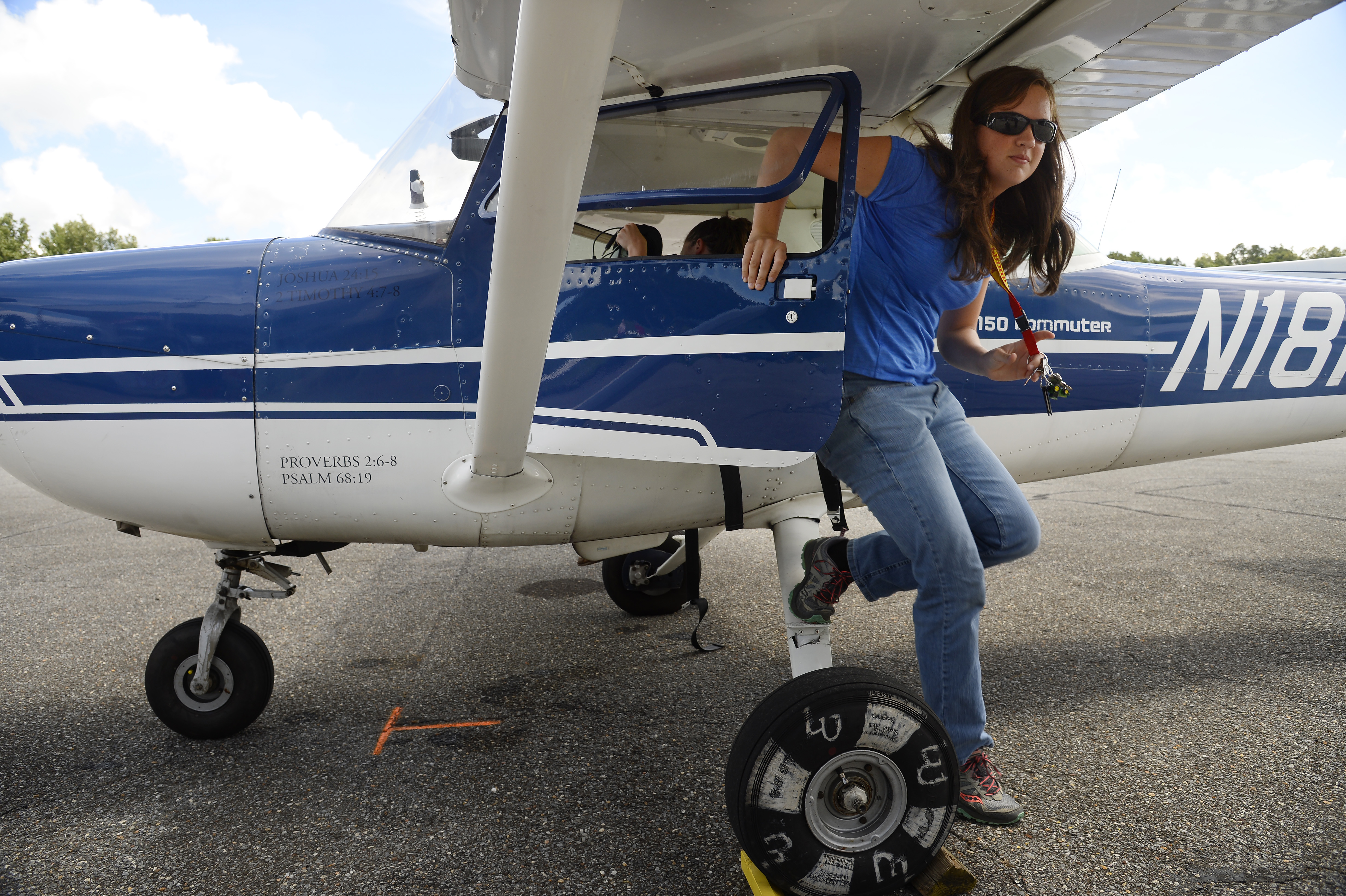 The younger Cihak said he “even soloed an airplane before I could drive by myself” and was thinking about making aviation a career, “maybe joining the airlines or the military.”

“Everything at Liberty starts with humble beginnings,” said Molloy, before he snapped a few photos to document the occasion.

“It’s just old-school flying,” said the elder Cihak after snipping his son's t-shirt to commemorate the day. “We haven’t lost it.” 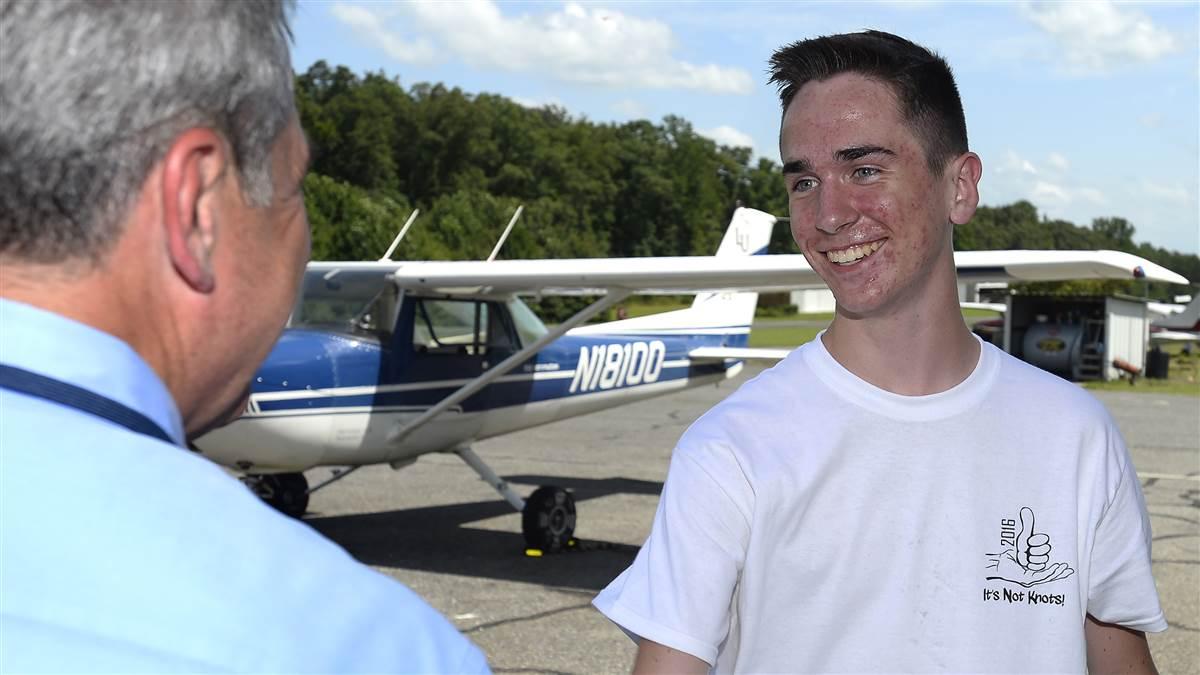