Inside the Spruce Goose

Acres of blueberry, hazelnut, and hop farmland 60 miles from the Pacific Ocean in northwest Oregon seem an unlikely home for one of aviation’s giants. The Howard Hughes-designed H-4 Hercules dubbed the Spruce Goose, a mammoth eight-engine flying boat that flew only once nearly 70 years ago, sits land locked in McMinnville, about 1,000 miles north of its birthplace in Southern California.

The aircraft attracts a steady stream of visitors to the Evergreen Aviation and Space Museum, a sleek glass, metal, and concrete hangar complex located in a vineyard across the road from McMinnville Municipal Airport. The colossal flying boat was dismantled and shipped from its former home at the Aero Club of Southern California to the Evergreen Museum, where it has been on display as the star attraction since 2001.

Sharing floor space with a B-17 Flying Fortress, an SR-71 Blackbird, and more than 130 other celebrated aircraft, the Hercules H-4 is so large that six aircraft are tucked under its right wing: a polished aluminum Republic F-84F Thunderstreak, a folding-wing North American FJ-3 Fury, a twin-tailed de Havilland D.H.100 Vampire, a 1927 Ryan NYP Spirit of St. Louis replica, a 1923 de Havilland DH-4M-1 reconnaissance biplane, and a McDonnell KDD-1 Katydid drone.

Evergreen beat out 27 other museums bidding to display the 400,000-pound monster because it promised the flying boat would be housed inside a world-class museum, open to the public, and kept in one piece, said Larry Wood, Evergreen Museum’s retired executive director and current docent. 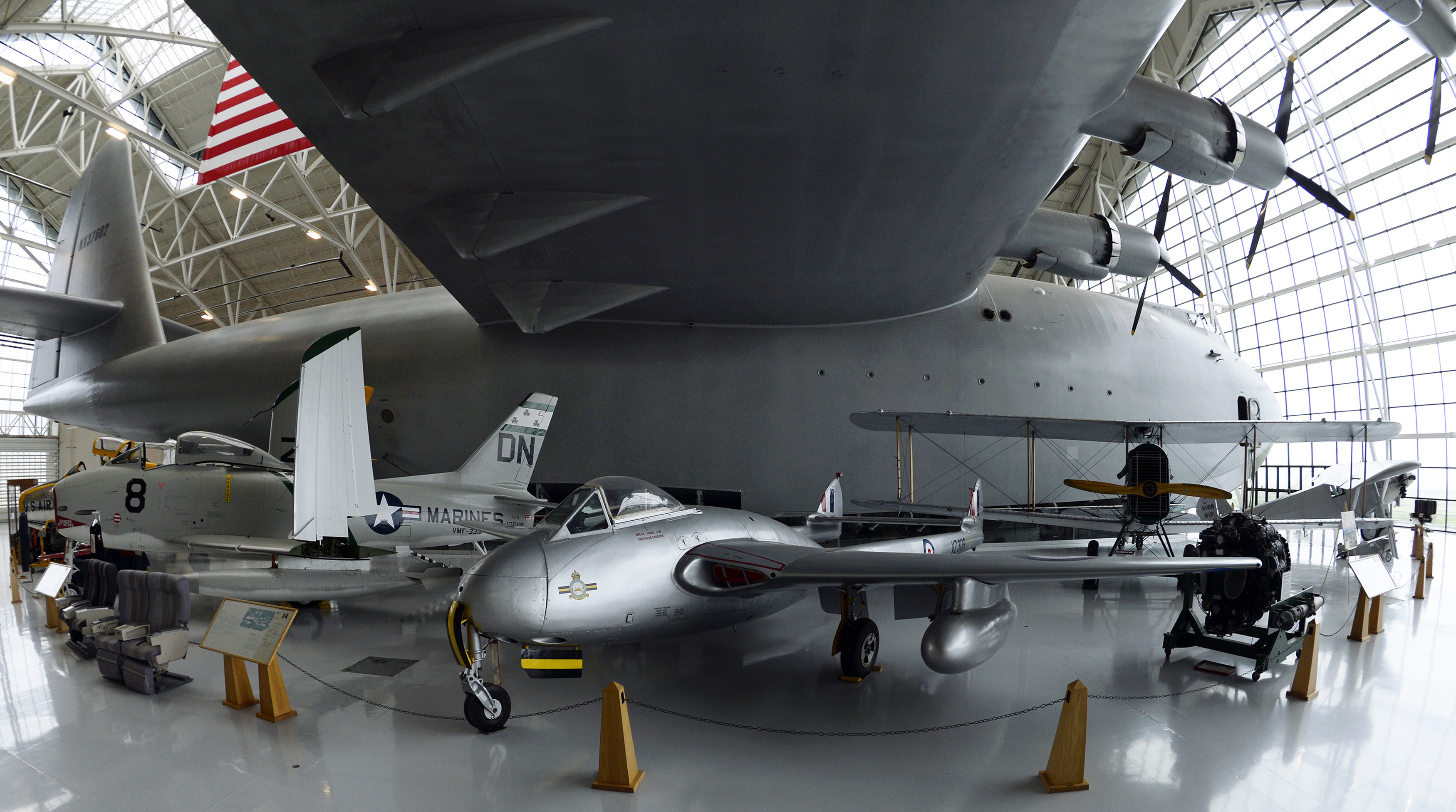 “This is a terrible place for a museum,” confided Wood, a retired U.S. Navy Douglas A-4 Skyhawk pilot with 3,000 hours. “But people from all over the world come here and everybody says, ‘Why did he build it?’ Well, nobody knows but him.”

The aircraft, with its laminated wooden plies so thin “they could be molded into any shape you wanted” was manufactured with a composite construction technique before carbon fiber technology was invented, said Wood. Metal was in short supply during World War II, he explained, so an alternate process was deployed to construct the aircraft and its 160-foot-long wing spar built up with 150 wafer-thin layers of Wisconsin birch.

That particular variety of wood is very resistant to dry rot, but curators and docents keep an eye on humidity and temperature to keep the Hercules in top shape. A little dusting is about all it takes to maintain the monster, said Wood. “Of course we have extra birch and all of Howard’s stuff including his design plans and even the furniture from his office.” 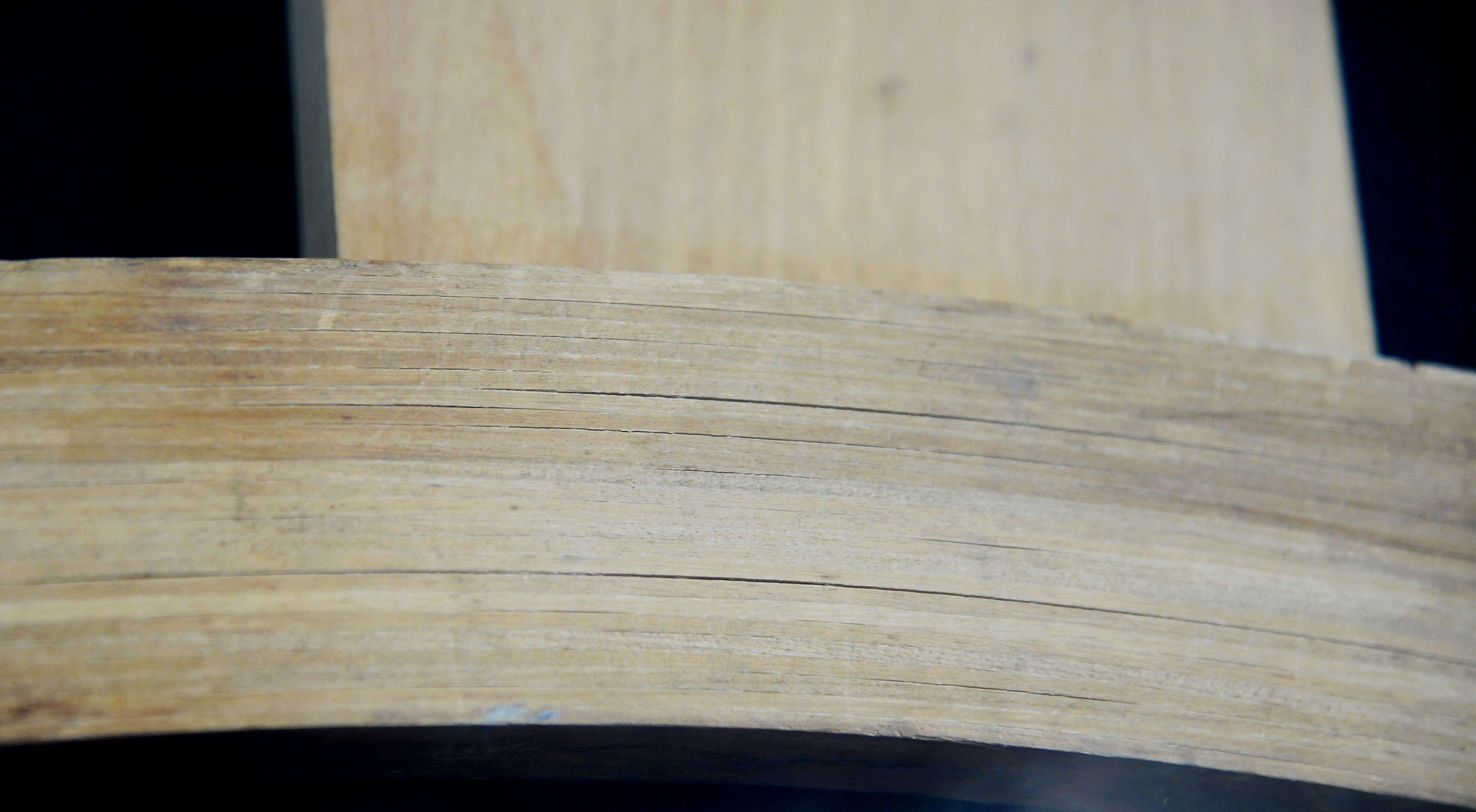 Wood reminded visitors that the H-4 flying boat, intended to haul 750 soldiers and two Sherman tanks, was designed with computer power no more complex than a slide rule.

Many know Hughes as an accomplished yet eccentric filmmaker, aviator, and entrepreneur. (A film released Nov. 23, Rules Don’t Apply, reveals Hughes’ idiosyncrasies and love interests.) However, he was “really, really a very good engineer,” said Wood, adding that Hughes often came up with elegant solutions to common problems.

For example, Hughes devised a system of interleaving thin layers of wood, copper, and glue to prepare the spar for an electrical current that, when passed through the sandwich, melted it rigidly into place. Because even a large work table was way too small, a projector displayed pictures of ribs on the floor and material for jigs were then cut to their correct sizes. A flotation system included inflatable beach balls stashed between ribs and a pair of Franklin engines on the flight deck provided juice for the avionics, hydraulics, and other systems.

The Spruce Goose had a wingspan of 320 feet and its tail flew 60 feet above the water. Each of the flying boat’s eight Pratt & Whitney R-4360 Wasp Major 28-cylinder engines produced 3,000 horsepower and sucked down 100 gallons of fuel per hour. The powerplants each bathed in 32 gallons of oil flowing through four banks of seven cylinders; the engines had two spark plugs per cylinder for a total of 448 spark plugs. A separate 189-gallon oil reservoir is on the flight deck. 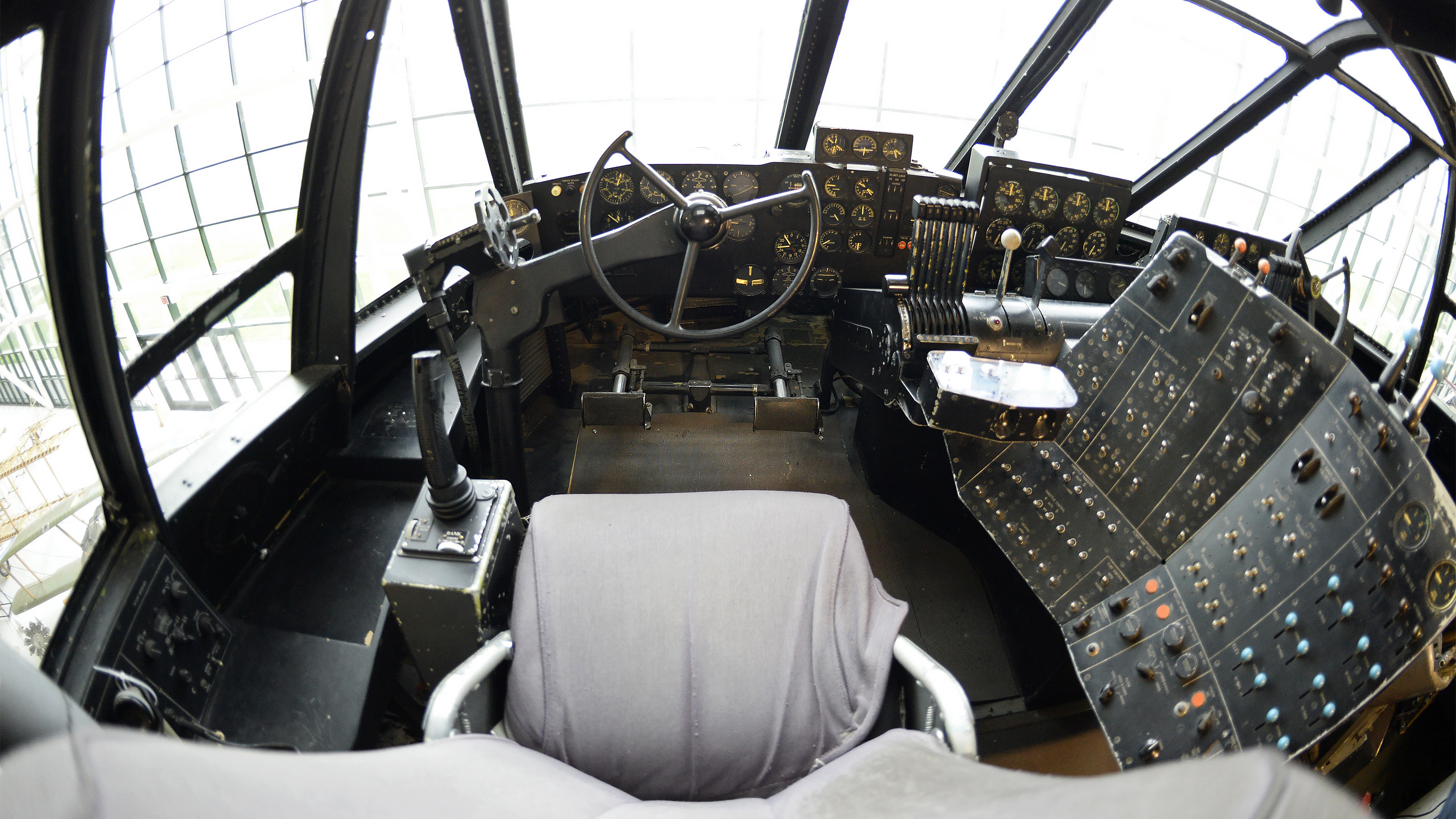 Guests to the museum can ogle the flying boat from the floor or pretend they are Hughes and pay $50 to climb a narrow cylindrical staircase to the captain’s chair where they can handle the eight power levers and get a souvenir photo. “We don’t let everybody in the cockpit for four reasons,” said Wood. “Number one we need the money and number two it’s not easily accessible. We don’t want to wear it out and we have to keep theft at bay.”

In the main cabin, comfortably padded passenger easy chairs recline deeply with a flip of one lever; stacks of radios occupy a corner of the flight deck; and acres of gauges, dials, levers, and switches spread out from floor to ceiling. A commanding view from the left seat includes a modified six-pack of flight instruments, a large semi-circular yoke that would look equally at home on a decent-sized yacht, four tall glass windows out front, and three more to each side. To the pilot’s right there are eight well-worn power levers and prop synchronizers; to the pilot’s left are a high-mounted elevator trim wheel and a tiller. 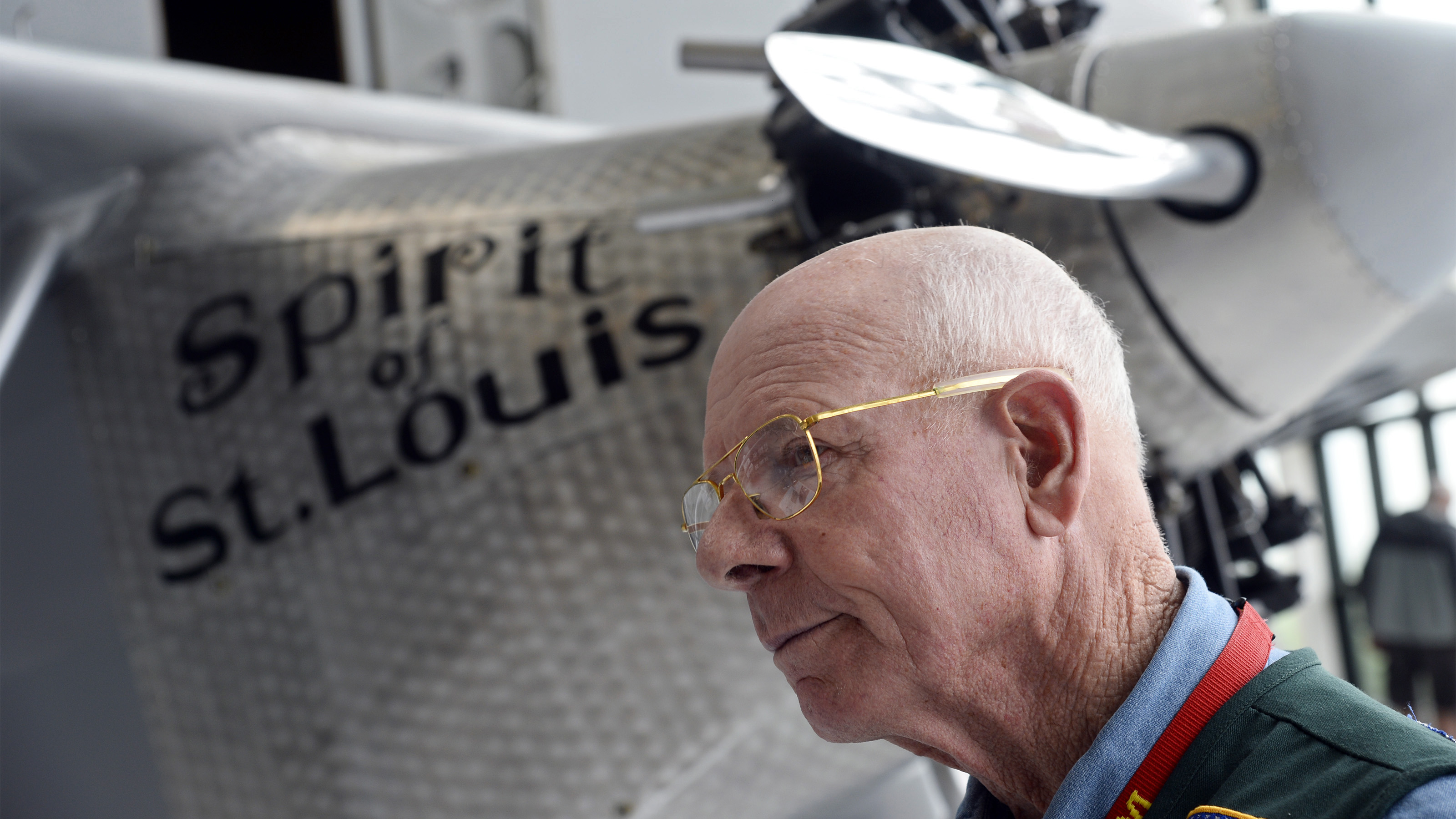 Wood said he thinks Hughes was mindful of his aircraft’s fuel burn rate and really didn’t want to go into the open ocean with more than two dozen reporters aboard, anyway.

“Keep in mind that he had been tooling around Long Beach Harbor all morning accelerating across the water” and showing off a little bit, theorized Wood. “How would it have looked to the press if he ran out of gas?”

Though the H-4 only flew one time—Nov. 2, 1947—there’s speculation that with a wiring upgrade and some TLC, the nearly 75-year-old flying boat (construction began in 1942 and continued until 1947) could waddle right out of the museum and into the Pacific Northwest sky. 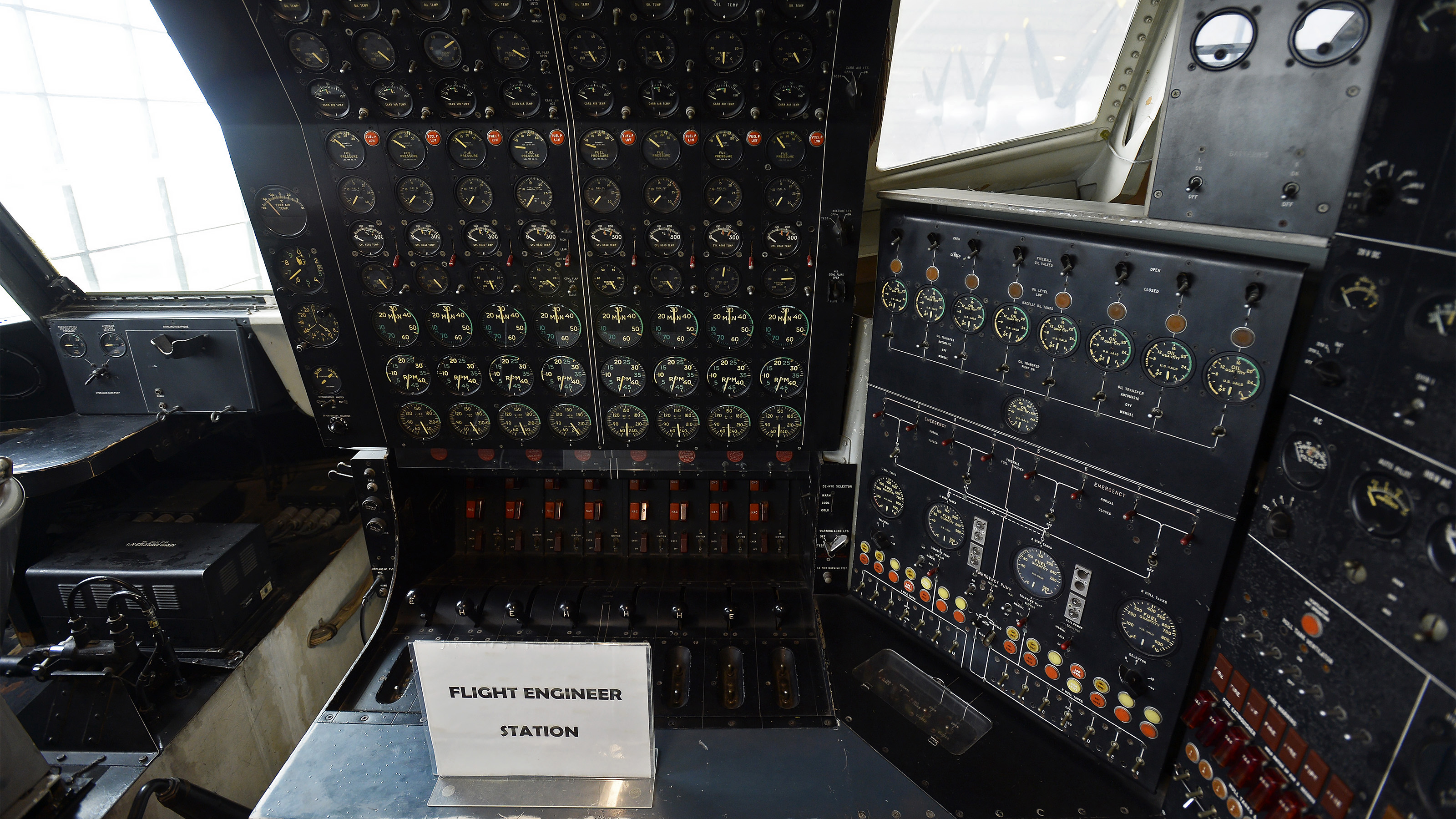 “Rumors are that some engineering students looked at it on a simulator,” said Evergreen Museum curator Tim Morris, “and figured the airplane does everything that Howard Hughes said it would.”

Maybe it's the legacy of Hughes, the curiosity behind the flying boat's beginning, or the wonder if it could fly again, but whatever it is, the wooden wonder attracts crowds eager to seek it out and get an up-close look at the engineering marvel that only once broke free from its earthly bonds. “This is our little jewel,” said Wood as he surveyed the aircraft from a balcony. “Aviators don’t want to see this aircraft destroyed.”