Get the app Get the app
Already a member? Please login below for an enhanced experience. Not a member? Join today
News & Media Wright Experience honors original 1903 Flyer

Editor's note: This article was updated Dec. 17 to clarify a statement about the Wrights' extended family.

Orville and Wilbur Wright were secretive and extremely protective of the designs for their new flying machines, said The Wright Experience’s Ken Hyde, an aircraft restorer who unlocked their mysteries. “If they hadn’t been so secretive there would be nothing for us to discover,” Hyde said from his working museum in Warrenton, Virginia.

His sleuthing led to the modern-day Wright Flyer and Wright Glider re-creations that are now hanging in several well-known aircraft museums.

Hyde explained the silver paint disguising a wing strut and its attachment fittings on an immaculately recreated 1911 Wright Flyer B, one of the brothers’ most popular aircraft, which sold for $5,500. He reminded visitors that the bicycle-building brothers who opened the door to powered flight on Dec. 17, 1903, also were into photography. The shutterbugs used silver-based paint to develop “an early version of stealth technology” that masked their woodworking and their fittings so the details wouldn’t show in silver-based glass-plate photography in use at that time. 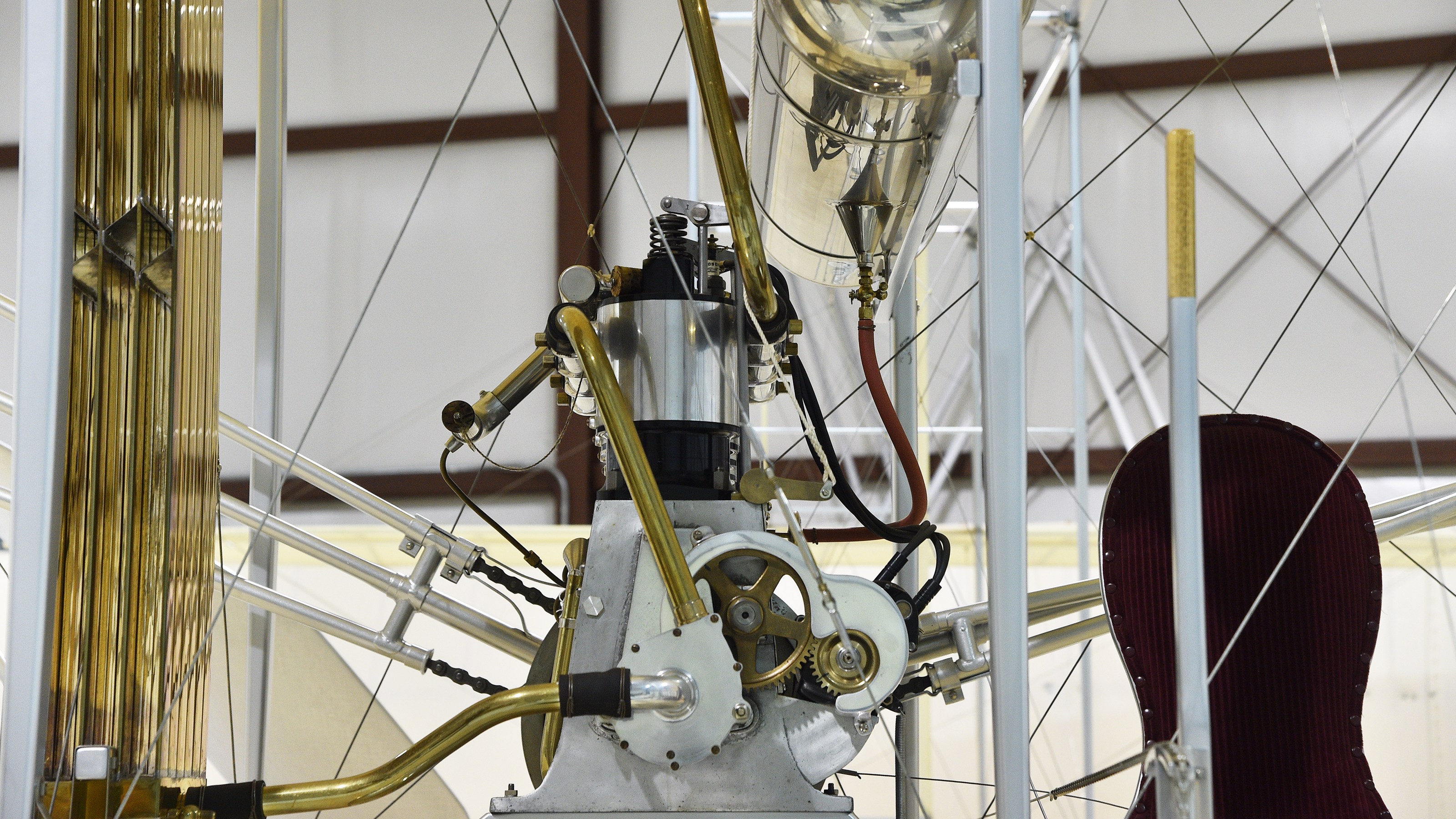 The sneaky disappearing act was both a help and a hindrance to aviation, said Hyde. It helped the Wrights keep their invention under wraps at the turn of the century, but it hindered generations of aviators trying to rediscover the secrets. They were so clandestine that when Wilbur traveled to Europe to sell his new invention, he wrote to Orville in a code that each could use if they had to make adjustments to their designs.

“So, what we’re trying to do is reverse engineer what they’ve done,” explained Hyde, who re-created three of the ground-breaking 1903 Wright Flyers that are on display in museums around the country. 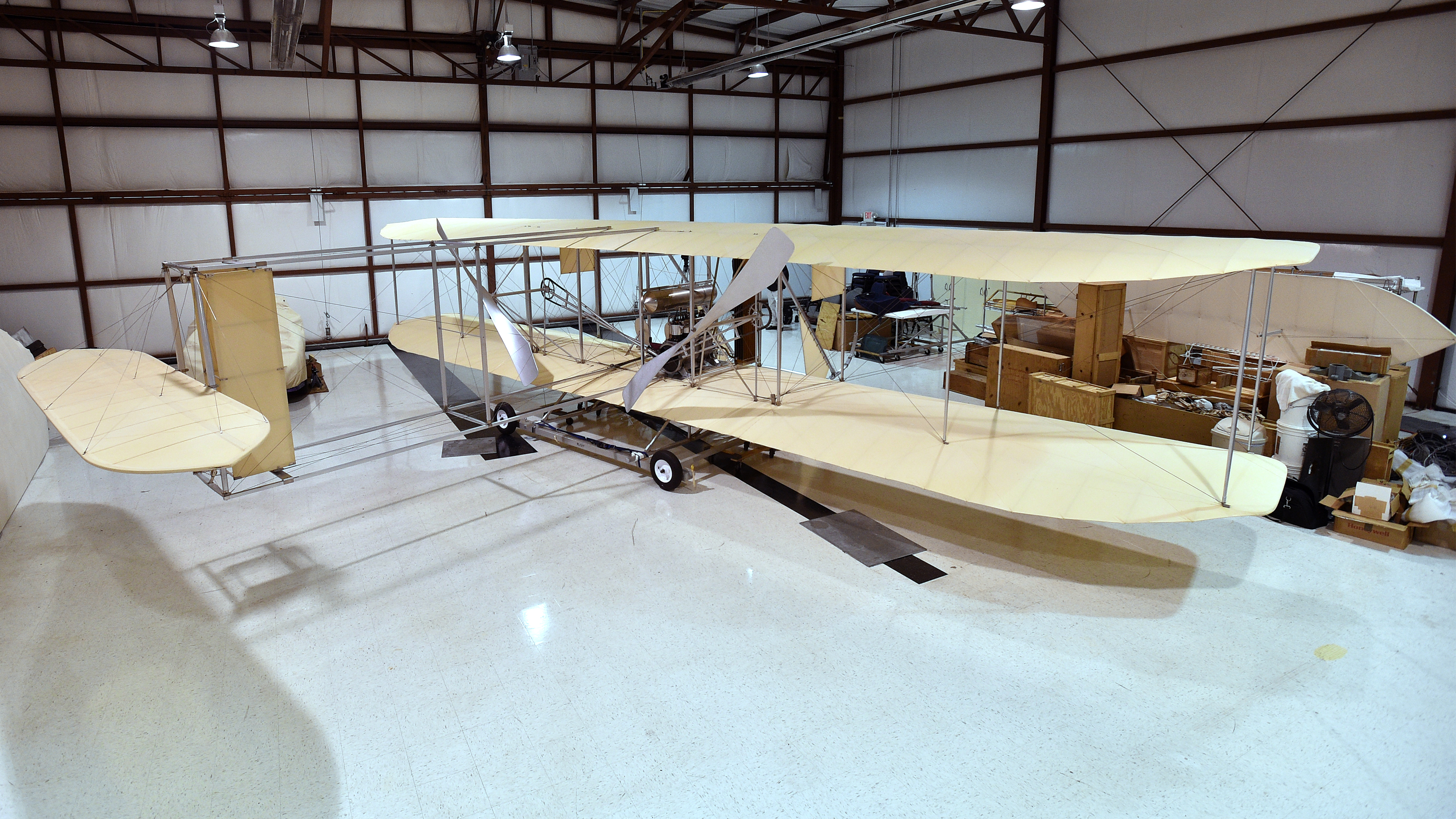 The Wright Experience began in 1999 with a look at the brothers’ glider designs, and progressed from there, said Hyde, a retired airline transport pilot, a longtime tinkerer who grew up fascinated with aircraft. “Each year we started doing what they did 100 years prior,” Hyde explained as his re-creations paralleled the Wrights’ design evolutions. “In 1899 it was the kite, in 1901 and 1902 the glider, and of course in 1903 the Wright Flyer machine. We’ve been nibbling away at it ever since.”

His team pored over letters, figures, and other correspondence to reverse-engineer the replica aircraft hanging in the Smithsonian National Air and Space Museum in Washington, D.C.; The Museum of Flight in Seattle; and the Henry Ford Museum in Dearborn, Michigan.

The Michigan Wright Flyer replica was originally built to celebrate the centennial of powered flight on Dec. 17, 2003, at North Carolina’s Kill Devil Hills, but bad weather prevented a reenactment. That effort was funded by Ford, Microsoft, and Eclipse Aircraft, in cooperation with the Experimental Aircraft Association. The 1903 Wright Flyer re-creation did fly, Hyde pointed out, just not on the 100th anniversary day. 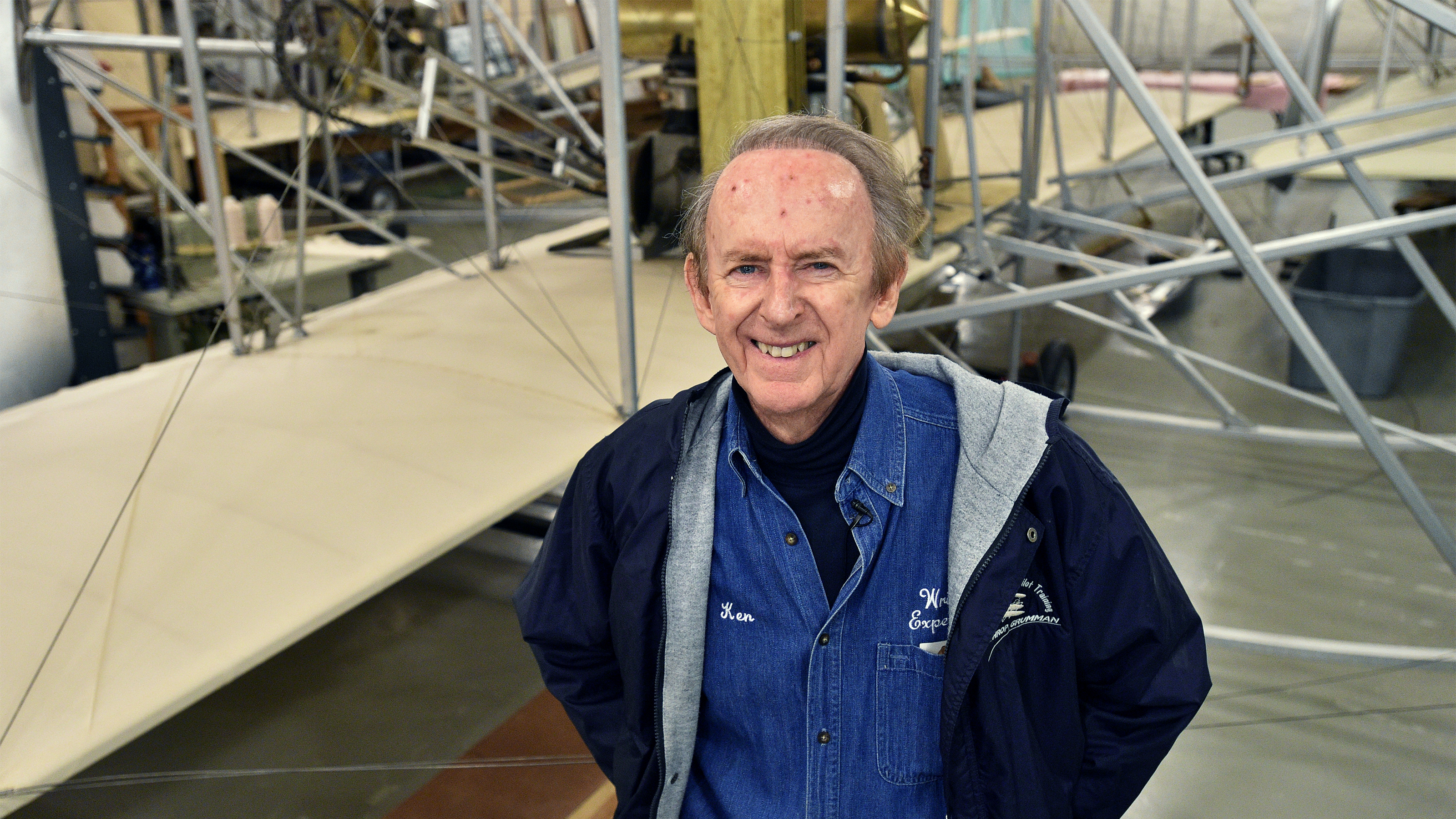 These days Hyde and his team chisel and carve propellers, sew and glue fabric and thread to wings and rudders, and grind metal fittings for the aircraft’s main components. “Primitive is not the word for most of the stuff we find we need to do,” said Hyde, “but we have a hard time improving on what the Wright brothers did.”

If the Wrights needed a die to cut threads on something, “they didn’t go down to the store to buy it, they made one.” He noted that there are small differences in the batches of parts, but since they were all made similarly, “they worked.”

The Wrights tried to do two or three things with every piece of engineering, Hyde said, and pointed out a flight control stick on the 1911 Wright Model B that controlled both direction of flight and yaw. “It was amazing, two bicycle mechanics came up with this.” He demonstrated how a series of cables, gears, and pulleys interconnected to apply the wing warping technology for directional changes simultaneously moved twin rudders to offset adverse yaw.

“I’m not sure when they slept, they accomplished so much in such a short period of time,” Hyde told AOPA. “They’d argue all night about something and when they woke up they would change sides and say, ‘Hey, I think you were right.’ They couldn’t wait to get into the shop each day.”

Digging a little deeper into the brothers’ personalities, Hyde said “Orville was a tease and Wilbur was much more serious.” However, they both “were cut-ups to a certain extent” and loved having their extended family's grandkids and cousins in the shop with them. He said the Wrights’ dinner table guests would sometimes be served with a “dribble glass” that had a hole in it, modified so that “water would dribble down their chin.” 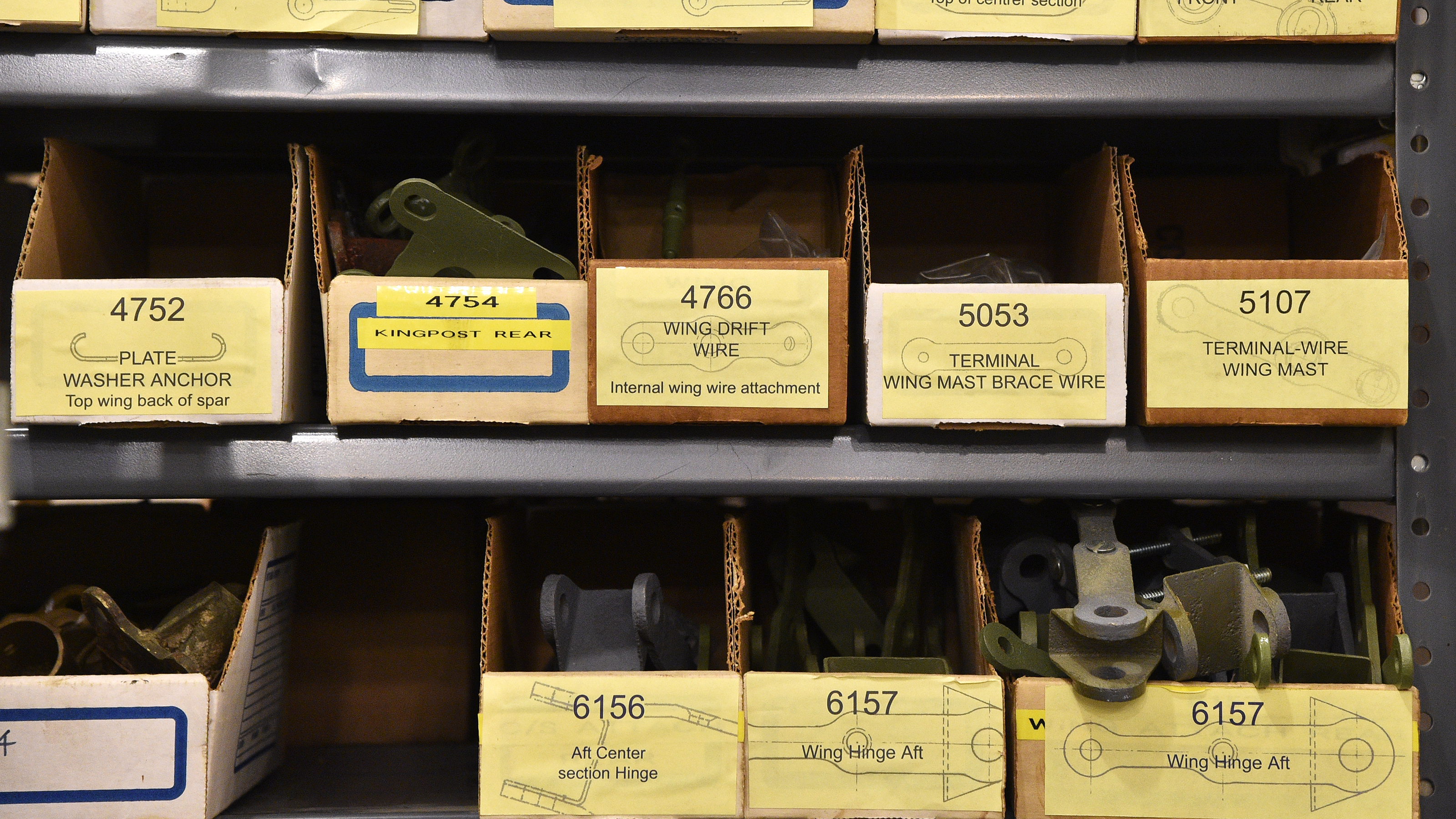 The goal of the Wright Experience museum and workshop is to “discover the secrets of the Wright brothers and to inspire a whole new generation of students interested in engineering and aviation,” said Hyde. “If we get aviation to be a part of their curriculum, we can show that math is not boring and apply some practical uses” to those concepts.

The unassuming shop and living museum is nestled near the foothills of the Appalachian Mountains. It has an engine bay, a propeller factory, a woodworking hangar, and a grass landing strip nearby. School groups from Virginia; Washington, D.C.; and West Virginia regularly amble down a gravel driveway to learn firsthand how science, technology, engineering, and math concepts (STEM) spurred the bicycle mechanics to greatness. 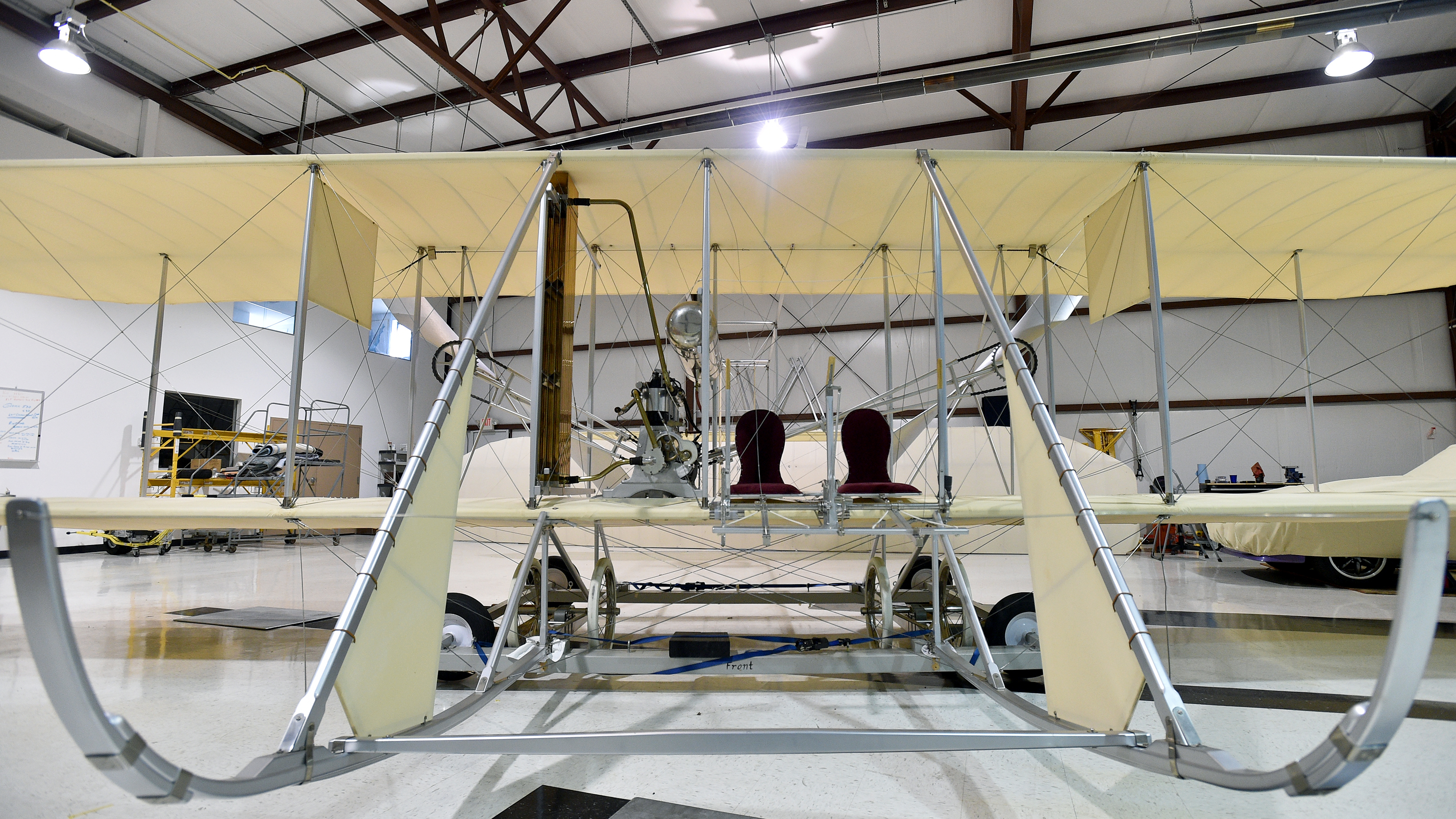 Hyde said the Wrights’ experiments with aviation were the forerunner for today’s STEM concepts and are a great way to teach future aviators how math can be interesting and fun. Their long-hand arithmetic “blows you away,” and he added that if the Wrights didn’t know something they went to the library to find out.

“Airplanes are a great hook” for math and other scientific observations, said Hyde, who is currently decoding a V-8 engine that the Wrights attempted to race.

“The beauty of a Wright brothers’ airplane is that nothing is hidden. If you show students a practical side for math, I think there’s just as much a chance at finding a modern-day Orville or Wilbur today.”