Get the app Get the app
Get the latest news on coronavirus impacts on general aviation, including what AOPA is doing to protect GA, event cancellations, advice for pilots to protect themselves, and more. Read More
Already a member? Please login below for an enhanced experience. Not a member? Join today
News & Videos Notams going digital 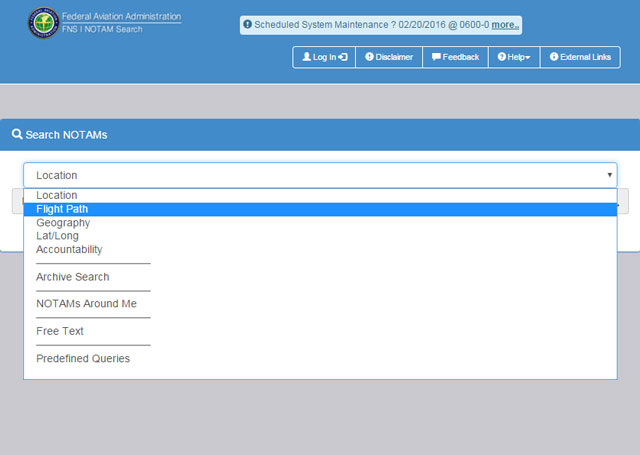 The analog and text-based notam system is on the way out, and AOPA is participating in the transition to a digital system of filing and accessing notams that has already begun to facilitate powerful new tools for pilots.

On Sept. 10, the United States Notam Service will migrate into the Federal Notam Service. AOPA is part of a safety panel with a mission to ensure that the transition is safe and seamless for pilots.

The FAA processed and disseminated more than 950,000 domestic notams in 2015, and a similar number of various other types. This avalanche of data can be much more easily sorted through with the new FAA Notam Search website, created to supplement (for now) and eventually replace the PilotWeb portal familiar to many pilots. The new notam search portal allows pilots to sort notams by location and flight route, and even look back at past notams up to three years old. The PilotWeb portal will be phased out following the transition.

AOPA is discussing with the FAA new features for Notam Search that have been made possible as the agency transitions to an all-digital notam system. Currently, about 70 percent of notams are issued in digital format, and that number will increase as more system users begin filing through a new, online-accessible, digital system.

The digital system will allow pilots to tailor notam searches very specifically to their mission, and one example that may come to fruition is a map depicting obstruction light outages, which are difficult to plot based on text notams but can be very important to emergency services pilots and others flying at low levels. AOPA has suggested incorporating aviation maps, such as sectionals, into the notam search as well.

A parallel tool allows airport managers and others who file notams to do so electronically online. The Notam Manager tool is digital and will both simplify sorting notices and enhance safety. Nearly 700 airports now utilize the Notam Manager tool, and AOPA is encouraging more airports to use the new program.

Enhanced notam accessibility and more effective ways to sort them were among the mandates of the Pilot’s Bill of Rights, and the new FAA website for searching notams was a direct result of the collaboration among stakeholders that followed.