Get the app Get the app
Get the latest news on coronavirus impacts on general aviation, including what AOPA is doing to protect GA, event cancellations, advice for pilots to protect themselves, and more. Read More
Already a member? Please login below for an enhanced experience. Not a member? Join today
News & Videos Carter pitches copter partners 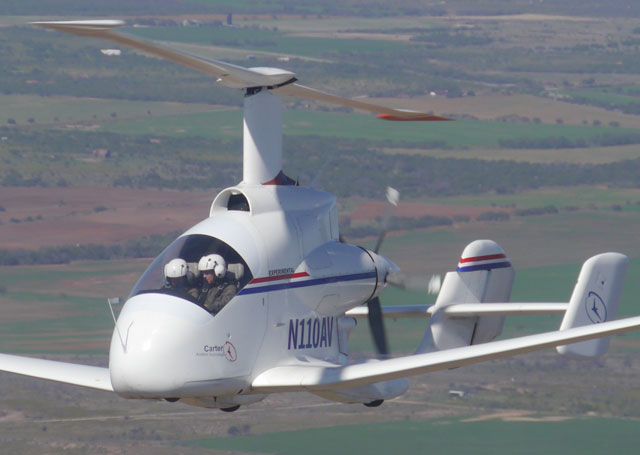 “We have a great deal of interest getting a relationship started with a major aerospace company to produce large-scale CarterCopters, but we cannot ignore the demand at the lower end,” Carter said in the news release. “We get frequent inquiries regarding vehicles even as small as single-place so we are going to put some energy into developing business for a smaller set of vehicles, too.”

Carter, at work for years building an aircraft that uses a combination of wings and a slow-turning, free-spinning rotor to produce lift, a pusher prop for forward motion, and a unique combination of airplane and helicopter flight controls, announced in May a push to license the technology to manufacturers able to produce large-scale versions. That effort continues, and the company hopes a slightly different approach—joint ventures instead of licensing—will spark interest from smaller firms in building three smaller versions, ranging from 2,000 pounds gross weight to 7,000 pounds.

“It avoids some of the financial barriers to entry regarding upfront license fees, and further incentivizes both the JV partners and Carter itself to ensure success,” Carter said.

The company is preparing to give additional flight demonstrations, and also plans to bring the CarterCopter to the Sun 'n Fun International Fly-In and Expo in Lakeland, Florida, in April.