Get the app Get the app
Already a member? Please login below for an enhanced experience. Not a member? Join today
News & Media Racing to catch drones 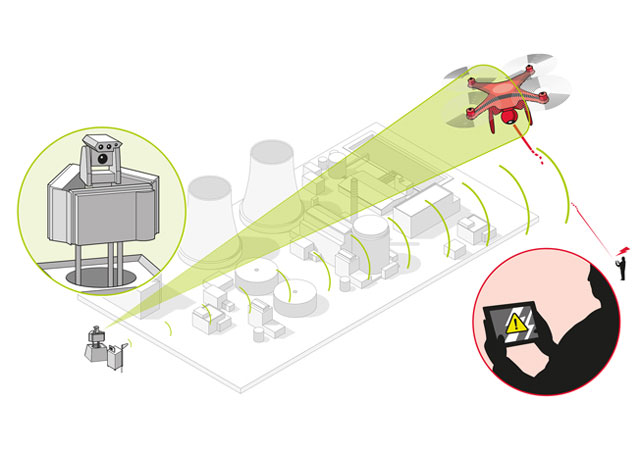 As worldwide interest in unmanned aircraft continues to ramp up, the race to develop a defense is likewise taking a sophisticated turn. Police in Japan mobilized a drone squad and fitted a large copter with a net to capture tiny bogeys after a drone (with trace amounts of radioactive material on it) landed atop the prime minister’s office. A similar approach is in development in Michigan. Battelle made headlines in 2015 with an anti-drone gun that disrupts control frequencies.

None of these approaches appear to meet all criteria of the MITRE Corp. drone capture challenge, which seeks to attract anti-drone technology with a $100,000 prize. The challenge specifically calls for a system to detect and take control of small unmanned aircraft, and land the offending drone intact (with bonus points for systems that can also locate the operator).

MITRE confirmed that they do want to talk to Airbus.

The European aerospace conglomerate posted a news release in September about a new system that can track inbound unmanned bogeys at ranges up to 10 kilometers, then jam the radio frequencies used to control the aircraft.

“Furthermore, the direction finder tracks the position of the pilot who subsequently can be arrested,” Airbus reported. “Since the jamming technology contains versatile receiving and transmitting capabilities, more sophisticated measures like remote control classification and GPS spoofing can be utilized as well. This allows effective and specific jamming and also a controlled takeover of the UAV.”

Airbus finally caught headlines with a display in Las Vegas at the Consumer Electronics Show in January, though a spokesperson was coy about the particulars.

“To be precise, we launched the system in September; our release now should simply alert visitors‎ to our CES display,” said Lothar Belz, in an email. “Nevertheless, we’ve made progress in terms of system integration towards automatization as well as direction finding and clutter suppression. And, by the way, we have received the first contract.”

Belz said that customer is a “private enterprise” in France but that he could not be more specific.

The news release said an operational system could be ready mid-year. That would put it potentially in the running for the MITRE prize, though Betsy Yates, who handles communications for MITRE, said that so far, Airbus has not thrown its drone-catching hat in the ring.

“I certainly contacted them with info about the Challenge,” Yates said in a Jan. 8 email. “But to date, no submissions from them.”

Airbus will have to overcome a few challenges if its Counter-UAV System is to bring home $100,000 from MITRE. Detecting a drone and jamming the control frequencies is one thing, but actually taking command of the jammed aircraft and landing it in a designated area intact is another matter. Different manufacturers have different control systems, and what works on one drone may not work on others. Not to mention the potential for skilled hackers to program their own drone control language or protocols that might complicate the task of flying a freshly hijacked drone to the chosen landing spot.

Then again, Airbus is a much larger and more sophisticated player than most of those already racing to counter the drone threat by capturing, rather than shooting down, rogue drones. (Boeing is reportedly working on an anti-drone laser.)

“All over the world, incidents with universally available small drones have revealed a security gap with regards to critical installations such as military barracks, airports or nuclear plants,” said Thomas Müller, head of the electronics business line at Airbus Defence and Space, in the September release. “As a specialist in defence electronics, we have all the technologies in our portfolio and the integration knowledge which are needed  to set up a quick-response protection system with extremely low false alarm rates.”

The Airbus solution may face another obstacle to deployment in America: The Federal Communications Commission takes a dim view of jamming radio frequencies, which may help explain why Battelle has taken the detailed version of its DroneDefender website offline “while we evaluate the permissible applications of the product under current regulations.”

The solution being developed in Japan and Michigan, an octocopter with a net, looks a bit slow and ungainly to wrangle something like a small quadcopter built for FPV racing, a tiny aircraft able to reach speeds of 60 mph or more and certainly more capable of evasive maneuvers than larger ships. For anyone with a better idea, the initial submissions to MITRE are due Feb. 7.