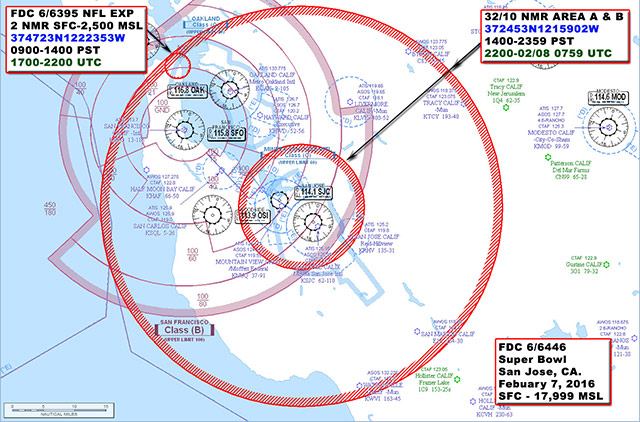 The FAA has issued a flight advisory to make pilots aware of temporary flight restrictions (TFRs) that will be in effect on Feb. 7 in connection with Super Bowl 50, which will be played at Levi’s Stadium in Santa Clara, California.

Multiple notices to airmen will be published to cover the National Football League championship game between the Carolina Panthers and the Denver Broncos. The FAA urges pilots to check frequently for changes to valid times and dimensions prior to operating in the affected areas.

AOPA participates in Super Bowl planning meetings to ensure that all aviation has access during large-scale events, and has reminded pilots to be aware of high traffic volume to and from the San Francisco metropolitan area that will require reservations for inbound and outbound flight plans Feb. 4 to 7.

Pilots may direct questions related to the TFRs to the FAA’s System Operations Support Center between 7 a.m. and 11 p.m. Eastern Standard Time, seven days a week at 202/267-8276.