A big change in pilot culture

The persistently high accident rate among Cirrus SR20s and SR22s was both troubling and perplexing. How could a modern design with an airframe parachute and the most technologically advanced safety equipment in its class have an accident record that wasn’t as good as the legacy fleet? And why were Cirrus pilots suffering fatal crashes without even attempting to deploy the airframe parachute that was such an unusual attribute of their aircraft? 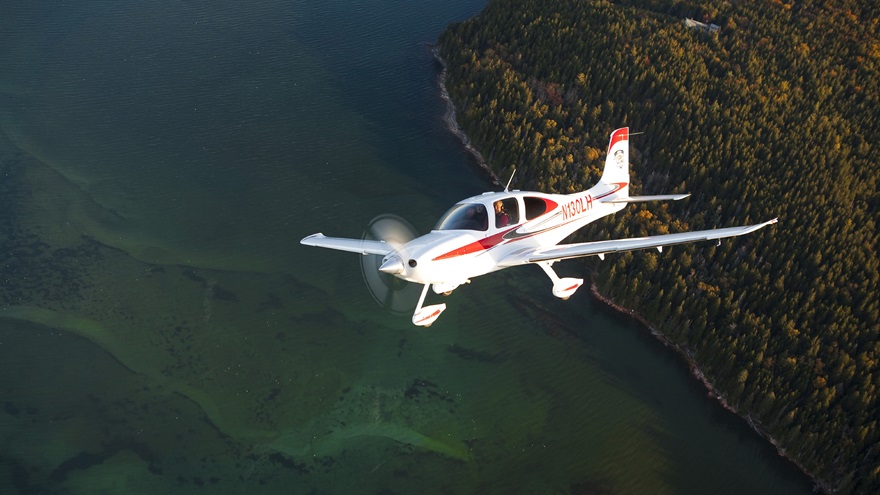 Some blamed the parachutes, calling them a marketing gimmick that gave Cirrus pilots a false sense of security and encouraged risky behavior. Others faulted Cirrus pilots, saying they lacked the judgment, stick-and-rudder skills, and temperament to safely fly high-performance aircraft in adverse conditions.

Cirrus took a hard, unflinching look at the problem and then took action. The company created a video-intensive, type-specific training program called “Cirrus Approach” that emphasizes deciding in advance when to use the Cirrus Airframe Parachute System (CAPS). At the same time, the company and its tight-knit pilot group, the Cirrus Owners and Pilots Association (COPA), set out to create a culture in which pilots who pulled the chute were applauded—not criticized or second-guessed—for their actions. The results have been remarkable.

“Over the past decade Cirrus has earned one of the best safety records in the industry, and we are proud to acknowledge their work with the Joseph T. Nall Safety Award,” said AOPA Air Safety Institute Senior Vice President George Perry. “By doubling down on safety working with its owners group and making investments in training and transition courses, Cirrus leadership brought their accident rate to less than half the industry average.”

The first Cirrus parachute “save” took place in October 2002, during a post-maintenance flight when an improperly installed aileron became stuck and caused a control malfunction. The pilot, who was alone in the airplane, deployed the chute, and it brought him down safely.

There have been 79 Cirrus CAPS deployments to date, and 65 are considered saves, accounting for 131 lives. (Some parachute pulls took place at too high an airspeed or too low an altitude for CAPS to work properly.)

A few CAPS deployments have become high-profile news events in themselves, accompanied by viral videos that have been viewed by millions of people. In 2012, a pilot on a medical mission to the Bahamas successfully deployed the CAPS over water after an engine failure, and his story was shared widely. A ferry pilot flying an SR22 across the Pacific on Jan. 25, 2015, had a fuel tank blockage that prevented the full amount of onboard fuel from reaching the engine and would have required ditching in high seas more than 100 miles from Hawaii. But a timely parachute pull, which was recorded on high-definition, gyro-stabilized cameras by the crew of a U.S. Coast Guard C–130, showed the parachute deployment, splashdown, and the pilot’s almost immediate rescue by the crew of a passing cruise ship.

On Nov. 13, 2015, former Wal-Mart CEO Bill Simon was flying an SR22 with two passengers when the engine lost oil pressure over Arkansas, and Simon’s successful parachute deployment (and ATC audio) was recorded and widely shared via social media. On March 5, a security camera recorded an SR22 coming down on the lawn of a building on Long Island, New York, and the father and daughter scampering out of the intact airframe.

All these events were widely discussed among pilots and nonpilots alike and raised the profile of both Cirrus and airframe parachutes.

This saying, coined by COPA's Rick Beach a decade ago, was meant to get Cirrus pilots to commit to pull the CAPS handle before their airplanes gained excessive speed or lost too much altitude for the parachute to work properly.

(The official CAPS max deployment speed is 133 to 140 knots depending on the model, and a minimum 400 feet agl in level flight or 920 feet in a spin. But actual CAPS saves have taken place at speeds up to 187 KIAS and altitudes as low as 444 feet agl during a descent.)

As the number of CAPS deployments has increased, fatalities have gone down sharply. The watershed year was 2014 when, for the first time, there were more Cirrus CAPS pulls than fatal accidents.

“There was a four-fold increase in the number of CAPS pulls in 2014,” said Travis Klumb, a Cirrus executive who helped develop Cirrus Approach. “It reflected a great deal of effort that had taken place during the preceding two years that got Cirrus pilots to train their brains on when to use CAPS. Pilots have to think about these situations in advance. When they do, they’re mentally prepared to pull the CAPS handle in an actual emergency.”

During recurrent Cirrus training, pilots are taught to incorporate CAPS in their takeoff briefing. They also make a “flaps and CAPS” callout when retracting the flaps during the climb, which typically takes place at about the same altitude the parachute system becomes viable.

Beach has compared CAPS use among its pilots to ejection seats installed in military aircraft. When ejection seats were first installed in early jets, pilots didn’t trust them and were reluctant to use them. Many pilots and crews died in crashes in which ejections were never attempted.

The Cirrus safety turnaround has got the attention of the broader general aviation industry, and more aircraft manufacturers are offering airframe parachutes as options or retrofits, or planning to offer them.

And what about the original CAPS criticism that they lead pilots to fly in dangerous conditions they otherwise would avoid?

There’s no way to definitely prove or disprove that theory, but anecdotal information abounds. Track FlightAware.com on any IFR day, and a large percentage of the single-engine piston traffic is sure to be SR20s and SR22s. Look at the single-engine airplanes over the Great Lakes, or the Mountain West at night, and Cirrus models are likely to be overly represented.

But does that mean they shouldn’t be in those places?

Cirrus’s Klumb says the airframe parachute allows SR20 and SR22 pilots to get more utility from their airplanes by flying in situations other single-engine pilots avoid.

“Many pilots don’t fly at night in single-engine airplanes, or they avoid flying in IFR conditions at night,” he said. “But when you’re flying a Cirrus, those situations don’t necessarily present unreasonable risks.”

Cirrus says it will continue creating engaging and relevant educational content for its pilots that keeps them actively learning.

Beach, COPA’s safety expert, credits the combination of Cirrus Approach, flight and simulator training programs that emphasize CAPS scenarios, procedures in which pilots actively call out the time during the climb (typically 500 feet agl) at which the CAPS system becomes viable, and a change in culture for the dramatic improvement.

“It’s not enough for an aircraft manufacturer to install a piece of safety equipment,” Beach said. “Pilots need to understand it, know how to use it, incorporate it in their aeronautical decision-making process, and have considered in detail how they would use it in an emergency. There’s been a very big change in the Cirrus pilot community regarding CAPs—and we’re not done yet.”