Get the app Get the app
Get the latest news on coronavirus impacts on general aviation, including what AOPA is doing to protect GA, event cancellations, advice for pilots to protect themselves, and more. Read More
Already a member? Please login below for an enhanced experience. Not a member? Join today
News & Videos Backcountry surprise

After six years under wraps, the XCub is revealed

The XCub is full of surprises, starting with its existence. A new, FAA-certified, piston general aviation aircraft is extremely rare these days, and the XCub comes to the flying public as a fait accompli. Its six-year development was closely guarded, and the project wasn’t even announced until its application for an FAA type certificate was final, and the first production aircraft were on the assembly line. That’s unheard of.

On the ramp outside the CubCrafters factory in Yakima, Washington, the $297,500 XCub is striking for its aerodynamically clean lines and exceptional fit and finish. The speed mods start with the spring aluminum landing gear (not bungees), carbon fiber fairings, and internal pushrod controls instead of draggy pulleys and wires.

This airplane, the third XCub the factory has produced, is halfway through an FAA-mandated 50-hour flight test period. The only practical implication of that, for me, is that during the test period it’s limited to one occupant—so CubCrafters President Randy Lervold will stay on the ground rather than coach me from the backseat. 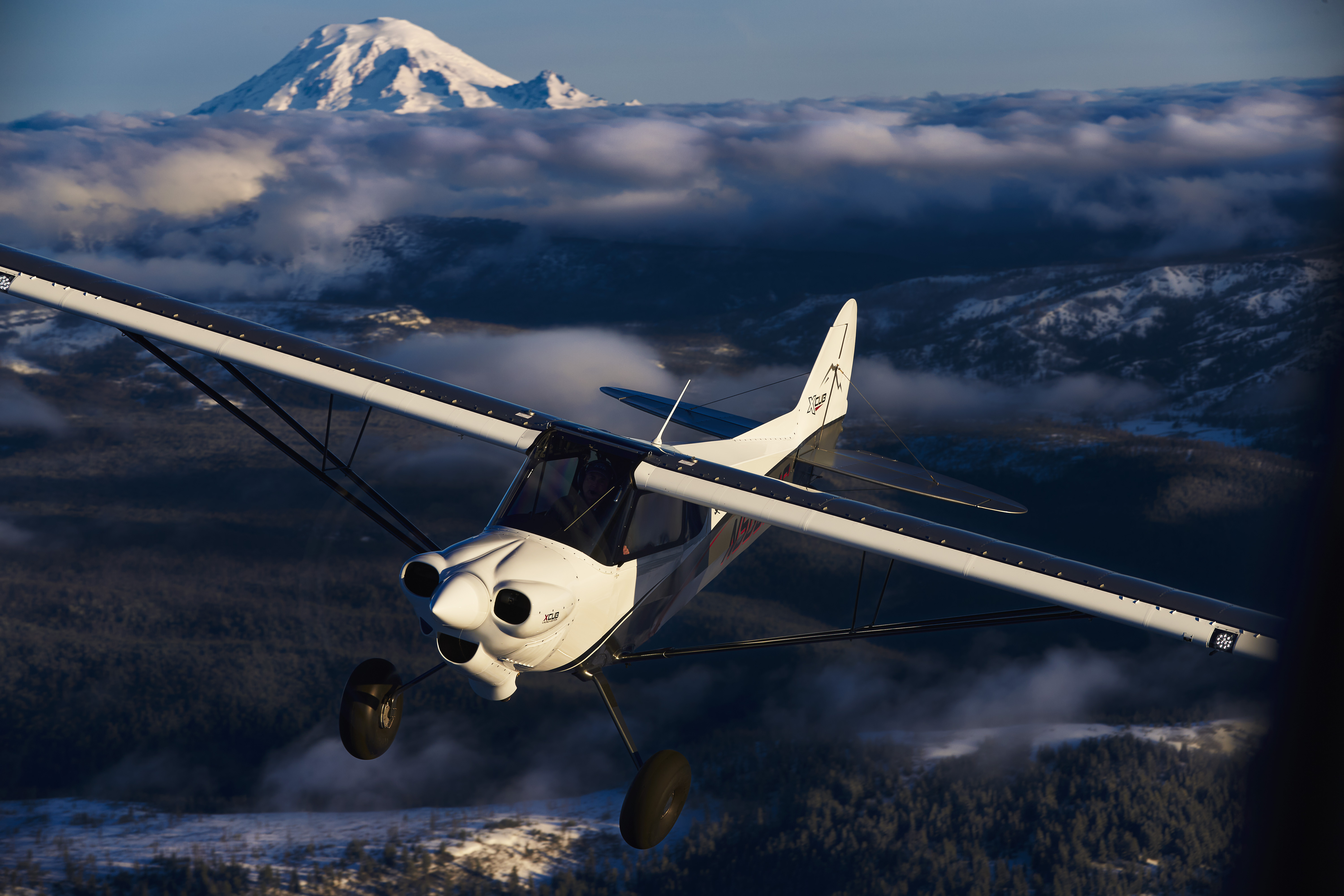 His first bit of advice is to forget whatever I think I know about Super Cubs (and related CubCrafters products such as the Top Cub and Carbon Cub).

“All Super Cub pilots are aware of that airplane’s idiosyncrasies,” Lervold said. “The ailerons are heavier than the elevator. Super Cubs tend to be loud, uncomfortable, and slow. And since so many have been extensively modified, no two fly exactly alike. The XCub is an entirely different animal.”

It’s a cool spring evening in central Washington, and the peaks of the Cascades about 40 miles west are covered in snow. A 10-knot breeze from the southwest is diminishing.

I step onto the XCub’s 26-inch tundra tire on the right side of the aircraft, N500XC; sit on the doorframe; and swing my legs into the cockpit, one on each side of the tall joystick. I grab the overhead bars, slide into the leather seat, and attach the five-point seatbelt harness.

The seat has a commanding view, more Range Rover than sports car, and visibility is exceptionally good for a tailwheel airplane. I can see over the nose, the side windows are cut low for an almost unrestricted downward view, and there’s an expansive skylight overhead.

The VFR instrument panel is quite low, and it’s laid out logically with engine controls on the left and lighting on the right. The fuel selector on the left side of the cockpit has positions for left, right, and off (there’s no “both”) and the electric fuel pump should be on for takeoff and landing. Clear sight gauges in the wing roots display fuel quantity.

The flap handle near the left wing root has three detents (16, 33, and 45 degrees). Left- and right-side windows in carbon-fiber frames open and close snugly, and each requires only one latch to lock or unlock.

Elevator trim is electric and actuated via a grooved rocker switch atop the stick grip. LEDs on the panel show the trim position, and I roll it into the place marked “takeoff.” Startup is normal for a carbureted Lycoming O-360, and taxiing requires a relatively high rpm because of the spongy tires. Run-up is standard and temperatures and pressures on the EI engine monitor soon are in the green.

Lined up with Runway 27 at Yakima Air Terminal/McAllister Field Airport (YKM), full throttle results in steady acceleration as the two-blade Hartzell composite prop spins up to 2,700 rpm. With flaps up and neutral elevator, the tailwheel rises off the pavement at about 20 mph, and I hold a tail-low attitude as the mains lift off at about 50 mph.

Turning out of the pattern provides the first sampling of the ailerons, and they’re delightfully quick and crisp with a natural self-centering tendency.

I reduce power to 25 inches of manifold pressure and 2,500 rpm, level off at 3,500 feet msl, and let the airplane accelerate. Even with the draggy oversized tires, the airspeed indicator climbs above 130 mph—a number most Super Cubs only see in a dive.

Outside Yakima’s airspace, I go through some get-acquainted maneuvers. Lazy 8s reveal a finely balanced pitch and roll harmony. The airplane is energetic in climb, and its relatively sleek lines allow it to accelerate briskly downhill. Steep turns require an absurdly small portion of airspace, and the expansive view provided by the high seating position, low side windows, and skylight makes maneuvering through this scenery a joyful exercise.

Slowing down for a stall series, the chirping aural stall warning comes on about 50 mph. But with just one person aboard, half fuel tanks, and idle power, I don’t get an actual stall break. The airplane just descends in a nose-high attitude with the wings level. I add a few inches of manifold pressure, and that increases the angle of attack enough to get a crisp stall break with slight left wing drop. Recovery is immediate with relaxation of back pressure.

I add flaps via the manual lever at 80 mph (the top of the white arc) and get a noticeable pitch up. The pitch change is much less pronounced at slower speeds, and experienced XCub pilots recommend 70 mph or less for flap deployment.

VS0 behavior is unremarkable, but don’t ask me the speed at which it occurs. The high AOA makes the airspeed indicator unreliable and it reads zero well before the actual break. (For what it’s worth, the GPS groundspeed was 35 mph.)

I drop into Buena Airport (WA97) for takeoffs and landings on turf. Full flaps and 55 mph result in a 700 fpm rate of descent at idle power. I crack the throttle and the slight power addition results in a 500 fpm descent rate. I cross the fence (a white-picket variety) at 50 mph and ease the power off, and nearly full aft stick results in a tail-low wheel landing. The soft tires and forgiving aluminum gear make the lumpy strip seem fairway smooth.

The next landing is a three pointer with two notches of flaps, light braking, and a rollout I estimate at 150 feet. The XCub’s Grove aluminum gear is nothing like the bouncy spring steel that generations of Cessna 170/180/185 pilots have come to know. Slips are allowed at all flap settings.

The instrument panel is sparse by modern glass standards. But the Trig Com radio is clear and strong, the ADS-B transponder provides weather and TIS traffic on the Garmin 796 portable. GPS-derived synthetic vision is available on the 796 via a Garmin GDL-39 ADS-B receiver.

The 796 looks and acts like a high-end multifunction display, and it’s hard not to roll one’s eyes at the absurd FAA-mandated placard that warns the GPS is “not to be used as a primary navigation source.” Is this the kind of wisdom you get from the vast sums spent on certification? The compass is OK for dead reckoning and pilotage, but not a 12-channel WAAS GPS?

Back at Yakima Air Terminal/McAllister Field Airport, the wind has diminished to just six knots and is well aligned with Runway 27. A full-flap approach at 50 mph indicated airspeed results in another tail-low wheel landing and a turnoff at the first intersection (near the 500-foot runway mark).

In sum, the XCub is a modern, highly refined adventure machine that takes the Super Cub line as far as it can logically go given the limits of current materials and FAA certification.

The 153-mph true airspeed top speed in level flight is impressive, but what’s far more meaningful to backcountry pilots is the tremendous range and operational flexibility they’ll have at more economical cruise settings. At a true airspeed of 120 mph, for example, an XCub pilot can cut fuel burn to 6 gph or less and have about eight hours endurance from a full tank (50 gallons) of avgas. At a normal Super Cub cruise of 100 mph, the XCub can cover 1,000 statute miles.

But the qualities that will most appeal to XCub buyers are more subjective.

The XCub is exhilarating to fly and aesthetically appealing inside and out. The clever layout of the panel, passenger seating, and stowage compartments show it was built by people who know their customers and the features they value.

My gripes are few: The seat is difficult to adjust fore and aft, and the cabin heater puts out precious few BTUs. (I’m told both of these issues are being addressed.) The XCub isn’t IFR approved, and the current regulations for IFR certification are too costly and cumbersome for the company to prove that it meets them. (Let’s hope the FAA’s much discussed Part 23 rewrite makes such improvements feasible.)

The XCub is a true crossover that retains the Super Cub’s legendary short-field capability and adds the speed, payload, and range of a utility Cessna 182. Best of all, the XCub also brings superb flying qualities.

Backcountry flying has steadily grown in popularity during three decades CubCrafters has been involved in it—and the XCub will accelerate that trend. It has the speed and range to put remote areas within reach. The airplane is at home at airfields large, small, and nonexistent.

The combination of the XCub’s thoughtful design, rugged construction, and attention to detail inspire confidence. Flying the XCub quickly becomes second nature, and the airplane’s benign temperament and outstanding visibility shift the pilot’s attention where it should be: on the wide, wondrous world beyond the windshield.

And the confidence doesn’t stop there.

The fact that CubCrafters was willing to invest the massive amount of time, talent, effort, and expense in pursuit of FAA certification—all without a single dollar of venture capital, overseas investors, or even a bank loan—shows that its leaders believe deeply in the airplane and have tied their fates to its future.

And based on the way the XCub performs, theirs looks like a very safe bet.