Get the app Get the app
Already a member? Please login below for an enhanced experience. Not a member? Join today
News & Media Students learn 'A Different Point of View'

A California dream became a reality for a former actor, Hollywood movie set photographer, and career pilot who established a safe haven for youth struggling in life and clawing their way through high school. A Different Point of View Founder Lynn Houston said her life was in shambles when she was their age, too. 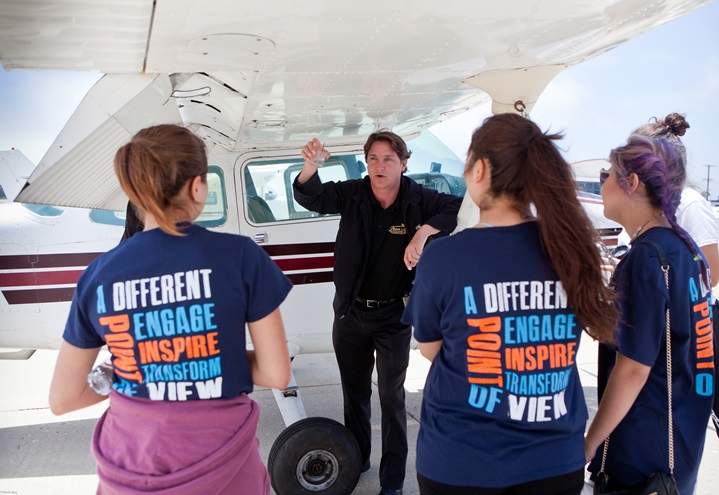 “I was a runaway,” Houston told AOPA, “until I found my way in life, which ultimately led me to a chief pilot position for a national flight school.”

Her route to the sky opened when Houston took an African photo safari that utilized general aviation aircraft. When the airplane lifted off from the grasslands she said “it was transformational.” That’s when she knew she had to get into aviation.

The formerly troubled youth put down her cameras in favor of E6B flight calculators, navigational charts, and performance data. Houston began her aviation career as an intern at American Flyers and soared through flight certificates and ratings before attaining her airline transport pilot certificate at SkyWest Airlines.

“Because I was a runaway and turned my life around I could see how children who live in poverty lose their way. I wanted to use aviation—the most powerful experience I’ve ever known—to teach them that there are options and careers out there.”

Houston began the Central California nonprofit in 2011 to help teenagers find their own way in life, and she uses aviation terminology to teach teenagers that they can find their passion and pursue it.

“The attitude of the aircraft plus the power settings will determine if an aircraft climbs or descends,” said Houston. “It’s the same thing in life.”

Some of the students in the program come from troubled backgrounds, and relating aviation to their personal challenges was a natural tie for Houston. Reminding the students of the phrase “attitude plus power equals performance” over and over, she said, helps drill home the point that they are in charge of their own destiny. “They must realize that they have to be the captain of their own life.”

She said the program’s leaders reinforced the idea that “personal attitude each and every day helps raise self-awareness and those attitudes will help determine personal performance, just like an aircraft.”

Lucas Graybill, now 19, was 16 and on juvenile probation when his probation officer made attending a three-day "A Different Point of View" aviation career session mandatory.

Graybill credited that experience with helping turn his life around. “I was not in a good spot when I first started the program and it really opened doors for me.”

He said Houston’s program taught him a lot about aviation and pointed him toward an aircraft maintenance career. “Besides the flight school, there is a maintenance hangar for custom aircraft as well as for regular maintenance. Above all, it helped me get an internship working toward my A&P.”

Graybill takes his shop earnings and reinvests them in himself for flight lessons to earn his private pilot certificate. After he earns his A&P certificate, Graybill said he would “like to find a way to give back to the program because I didn’t do it all on my own.”

A weekend career event June 24 to 26 at the Santa Barbara Municipal Airport brought together 15 youngsters with leaders from the U.S. Army, professional pilots, air traffic controllers, and “at least 10 different careers in aviation.” They learned about airman certification standards, handled missions in full-motion simulators, and flew single-engine Cessnas with instructors. By the end of the weekend, Houston said the program’s participants understood that they could find their passion and pursue it.

The program tries to serve 40 to 50 students per year, and each month the group plans a “discovery day” to follow up on concepts and to provide ongoing mentorship. In the coming weeks there are plans to visit Vandenberg Air Force Base to view an Atlas V missile launch and further down the road to attend a talk by NASA astronaut Capt. Scott Kelly. Other day trips have included non-aviation destinations like whale-watching along the California coast that participants praised as both fun and educational experiences.

“We hope that something is going to click and make them say ‘Wow, I can do that.’ Sooner or later they must realize that they have to be the captain of their own life,” Houston said.