Get the app Get the app
AOPA Members DO more LEARN more SAVE more - Get MORE out of being a pilot - CLICK HERE
News & Media Getaways: Triple Tree Aerodrome

Editor's note: This article was updated Aug. 13, 2018. For the latest information on Triple Tree and its general aviation fly-in in September, visit the aerodrome's website.

Finding the secret to happiness at a grass strip

Pat Hartness might be aviation’s Peter Pan. His “Lost Boys” have found their happy place at his playground, Triple Tree Aerodrome outside Greenville, South Carolina. They fly, they build things, they party, they laugh, they work hard, and they play hard. Don’t let the gray hair fool you.

The story begins. What would you do if life had been extraordinarily kind to you, had given you all the material things you’d ever wished for, and there was nothing you could ever want? Well, you’d set up a great playground for your friends, share the fun, and build up the economy of your little hometown, right?

The Hartnesses were Pepsi-Cola in the South. Not only selling the products but the bottler, too—the inventor of a bottling system, to be exact. His dad offered him a little money upon graduation and Pat invested it in Pepsi, the “other” cola—Coke was king here then—so a little money went a long way. Then stores came along looking for a cheaper cola than Coke, and a small fortune was made. Add the ingenuity to improve on the packaging process, and an empire was built. Hartness International was sold several years ago for an undisclosed amount to Illinois Tool Works.

Hartness’s dad, Tom, was a big part of this success, and his mom was the first female certificated pilot in South Carolina. The family loved flying. Hartness built model aircraft and eventually started flying radio-controlled (RC) aircraft. At Furman University he met his best friend: Joseph T. Nall. Joe Nall was the former NTSB member who was killed as a passenger in a 1989 airplane crash in Caracas, Venezuela, and for whom the AOPA Air Safety Institute’s annual aviation safety report is named. Nall and Hartness flew radio-controlled aircraft together and started an RC fly-in at the Hartness property. That was in 1978. What is now Joe Nall Week at Triple Tree has grown from 1,700 attendees to more than 15,000; RC teams come from all over the world to participate.

The property. Hartness and his wife, Mary Lou, discovered what is now Triple Tree Aerodrome in 2000. It was her suggestion that it be named after the three large oak trees on the property. And it was a much better name than Kilgore, the plantation of which the property once was a part. Kilgore Aerodrome doesn’t work for an aviation Mecca.

Triple Tree Aerodrome (SC00) is located in Woodruff, South Carolina. It is a private airstrip but happily welcomes visitors. Use Triple Tree’s multicom frequency (122.9 MHz) and give 24 hours notice before your arrival. Bring your own tiedowns and remember there is no fuel on site. Pilot information is on the website and has very detailed instructions for arrivals and departures during the annual general aviation fly-in each September. Those instructions are great for pilots visiting any time. Subscribe to the mailing list and receive updates and additional information. In addition to the GA fly-in in September, the Joe Nall RC fly-in takes place in May and the aerodrome is closed to GA traffic during that time. For more information and to sign up for the mailing list, visit the website.

Strip sites: When you love to land on grass

» Lee Bottom Flying Field (64I) in Hanover, Indiana, has a 3,000-foot grass strip maintained by owners Rich and Ginger Davidson, who welcome pilots into their “backyard” and host an Aviation Migration there each fall.

» Gaston’s White River Resort, in Lakeview, Arkansas (3M0), has a 3,200-foot grass runway on its 400-acre property situated along the White River. Famous for trout fishing, it has 69 riverfront cottages—all painted pink.

» Sugar Valley Airport (5NC2) in Mocksville, North Carolina, has a 1,000-foot grass strip and welcomes pilots as well as artisans. It’s a dairy farm turned airport that has craft studios in many of its hangars—as well as airplanes.

» Sullivan Lake Airport (09S) in Metaline Falls, Washington, has a 1,700-foot grass runway in the Colville National Forest. There are campsites, salmon fishing, and mountain biking.

» River Bend Aero Ranch in Mena, Arkansas, has a 3,300-foot grass runway in the Ouachita Mountains. There’s a cottage for rent as well as tent camping.

» Ringneck Ranch Airstrip (55KS) in Tipton, Kansas, has a 2,600-foot grass airstrip that will land you right in the heart of the 5,000-acre ranch and offers lodging and pheasant hunting.

Triple Tree welcomes all general aviation aircraft to stay for the day or several, and welcomes RVs and campers too. There are RV hookups and bathrooms and showers. But remember—no fuel.

• Chocks. Bring your own tiedowns.

• Coke. If you’re not a Pepsi drinker, you’ll need to bring your own soda—and a koozie to camouflage your non-Pepsi choice.

• Folding chairs and/or blanket. There’s a lot to observe at Triple Tree, so you’ll want a viewing perch.

• Full picnic basket. Unless you’re arriving when Mr. Pat and his friends are cooking (check the website), you’ll need to bring your own food. There are no restaurants or vending for miles around.

• BYOB. There’s a great bar area but you’re responsible for your own beverages.

• Friends. Especially young friends. The guys at Triple Tree love to share aviation with others, especially the younger set. —JSW

But there’s a lot of truth to that. Hartness says he moved more than “nine years” of dirt around to create the crown jewel of Triple Tree: a 7,000-foot-long, 400-foot-wide, flatter-than-a-pancake runway on which a jet can land. Its grass is Tifway 419 Bermuda—the kind you find on golf courses. Kids are known to spread out on the turf as if they are making snow angels; grown-ups want to do it, too.

In creating his aviation playground, Hartness was adamant that it serve two purposes: a great GA airport and a great RC airport. So there’s a special area for flying and viewing RC aircraft. There’s a 54-acre lake for seaplanes, and sand areas along the lake for RC seaplane operations. Joe Nall Week is held in May and the Triple Tree Fly-In in September.

Visitors and attendees to both events are treated to first-class amenities. There’s a well-appointed clubhouse—Pepsi products on tap. A Mediterranean-style patio with a pizza oven. An open-air bar and dance floor. Gazebos. RV hookups for every size. Six miles of walking trails. A full-service bathhouse replete with large shower stalls and granite countertops.

Hartness and his gang are the caretakers. The grass is mowed every 48 hours with a special mower the gang designed. Called Deere John, it’s a 36-foot-wide, tractor-pulled device with 12 10-horsepower rotary heads that can mow the giant runway in just a couple of passes.

Hartness bought a 1940s-era tower from nearby Donaldson Air Force Base for $100; he and the boys picked it up in pieces and restored it on the property. From its 60-foot height, set up on a hill, is the best view of this playground.

The aircraft. If the wow factor of a 7,000-foot-long grass runway isn’t enough, behold the hangar. Perched overlooking the seaplane lake, the hangar houses myriad treasures. There’s a 1939 Spartan Executive named The Spirit of Triple Tree that Hartness meticulously restored; a T–6 Texan; a Piper Cub; a P–51 Mustang—and those are just some of the full-size airplanes. From floor to ceiling are RC aircraft of every shape and size. Model aircraft in varying stages of restoration or build-out. Walls covered with photographs, drawings, paintings, newspaper clippings. You could spend days here and not absorb it all.

Currently Hartness has an instructor on site—Mark Murphy—who is teaching the gang how to fly the P–51 and the T–6. Traynham is writing a blog of his adventures and misadventures, “The Making of a World War II Pilot in 2015” (www.tripletreeaerodrome). As many of the gang as can will learn to fly these aircraft, and will fly around the state and serve as ambassadors for aviation, aviation history, and Triple Tree.

The future. Hartness discovered his love for aviation through radio-controlled aircraft. They still fascinate him. “I love all the freedoms of flying,” he says. “The beauty of RC is the danger and recklessness without the consequences. I fly like I’m in the airplane.”

He wheels out one of his pride and joys—an eight-foot Sukhoi SU–26—to the RC area of the runway and puts it through its paces. He’s a master.

Hartness is no longer the owner of Triple Tree. He donated it to a 501(c)(3) nonprofit educational entity run by the boys—er, board of directors.

“We had all bought into the idea that kids aren’t interested in aviation,” said Traynham. “But it’s just a lack of exposure. You get kids out here and it’s a universal ‘oh, wow’ when they see it. This is the gift Pat Hartness is giving—the ability for us to expose kids to the joys of aviation.”

Currently under construction is a multifunctional educational facility where these young-at-heart aviators can spread their gospel of aviation. It will have a 40-foot-by-60-foot learning center and a 60-foot-by-100-foot restoration facility. “We host hundreds of school kids from Spartanburg County schools and teach them about airplanes, aerodynamics, and the real story of the Wright brothers,” Traynham says. “This new facility is going to give us a comfortable setting [regardless of the weather] and great AV equipment to do justice to the subject matter. Additionally, we host many, many others through organizations like Cub Scouts, Civil Air Patrol, youth-oriented RC events, and local tech schools.”

The Triple Tree mission? The board says it is “To ignite and expand the passion for aviation.” Or as Peter Pan would say, “It is not in doing what you like, but in liking what you do that is the secret of happiness.”

While at Triple Tree Aerodrome, I had an opportunity to get a lesson in flying RC aircraft. My instructor was Gene Strozier, a retired pharmacist who is one of the group’s top RC fliers. He selected an Eflite Apprentice S RC trainer and took it out to the field.

After some instruction—ailerons, rudder, all very similar to full-size aircraft—I have the controls. Up, down, loops! Speed. Stall. Something flies off the aircraft, so Strozier takes over. An aileron has detached itself, yet he lands it smoothly—until the propeller pops off. No worries; they have two more trainers.

Strozier brings the next one out and while I am watching Hartness, I hear a funny sound—like an unhappy man. “You didn’t see that?” Strozier asks. He has crashed in the lower 40. Lesson over. “I am never going to live this down,” he says, dejectedly. We didn’t see him the rest of the day. —JSW 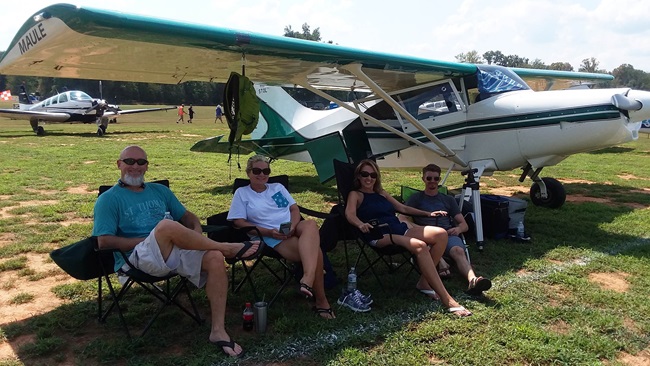 Lights out at Triple Tree 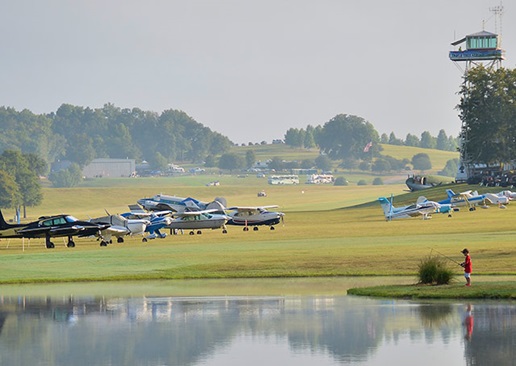 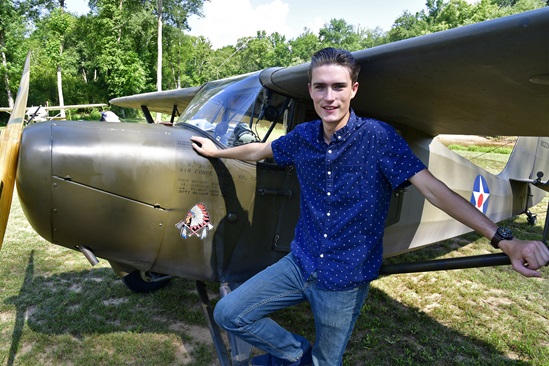