Ed Haerter made sure he had his white scarf on hand for his North American F-100 Super Sabre flight May 17—his first since February 1969 when he flew his last combat mission in the early jet fighter in Vietnam. The scarf, a gift from his wife, Nancy, when he started pilot training in the Air Force, became part of his uniform, tucked between his neck and flight suit on every flight, including the 194 missions he flew during his military career. 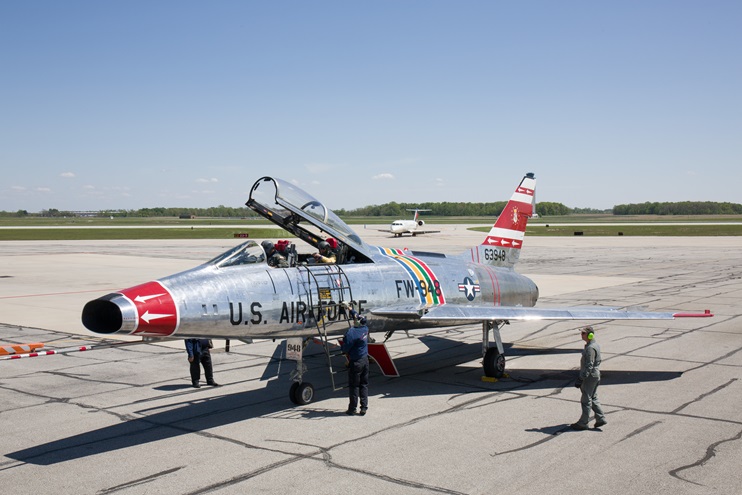 F-100 pilots take one more flight in the Super Sabre at Fort Wayne International Airport in Indiana. Photo by Mike Fizer.
“One day we were going off to fly and I had forgotten it, and I got out to the airplane and I thought, ‘Oh crap I don’t have my scarf,’ so I quick grabbed the Jeep and went back and got it,” Haerter recalled. “It was almost like it would have been very bad mojo if I hadn’t.”

Nancy, their sons, Chris and Matt, and their grandson Nicholas were on hand for Haerter’s flight at Fort Wayne International Airport in Indiana. About a dozen men who flew the F-100, or Hun, are scheduled to fly the fighter between May 16 and 21 to coincide with the Super Sabre Society’s convention in Fort Wayne. The society honors the legacy of the F-100 and the men who flew it. 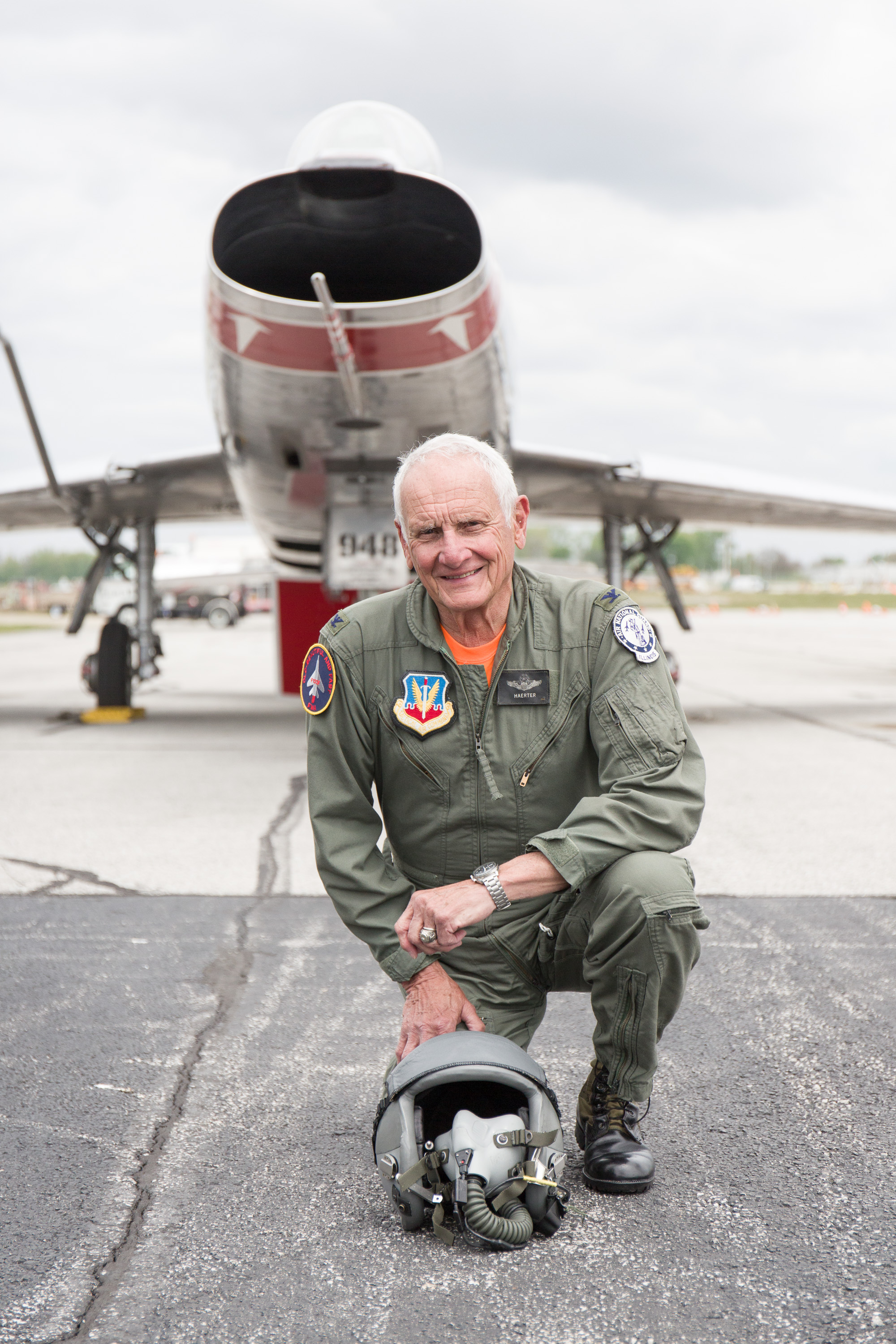 Dean Cutshall, who owns and flies the F-100F based in Fort Wayne, and his crew chiefs, Jim “Prez” Prezbindowski and Paul Swick, are working to make sure the fighter pilots can fulfill their dream to fly the Super Sabre “one more time.” Prez and Swick arrive at the airport between 7:30 and 8 a.m. to start the hour-long preflight for flights scheduled at 9:30 a.m. Swick handles the airframe while Prez shimmies down the narrow intake on his stomach to inspect the engine for any foreign object damage.

The two had maintained F-100s during their military careers, and they meticulously restored the aircraft when Cutshall bought it 20 years ago and brought it to Fort Wayne. It had served in the Turkish military and had been beaten and abused, Swick said, before it was sent to Mojave to be turned into a drone for target practice. The aircraft was spared because it was not needed as a drone, and the Air Force sold it to a man in Texas who gave it a new paint scheme but didn’t address the mechanical issues. “I wouldn’t have flown in it,” Swick said. He and Prez worked on the Super Sabre for a year and a half to return it to safe flying condition, and have since worked with Cutshall to attend airshows and occasionally give rides to former F-100 pilots. 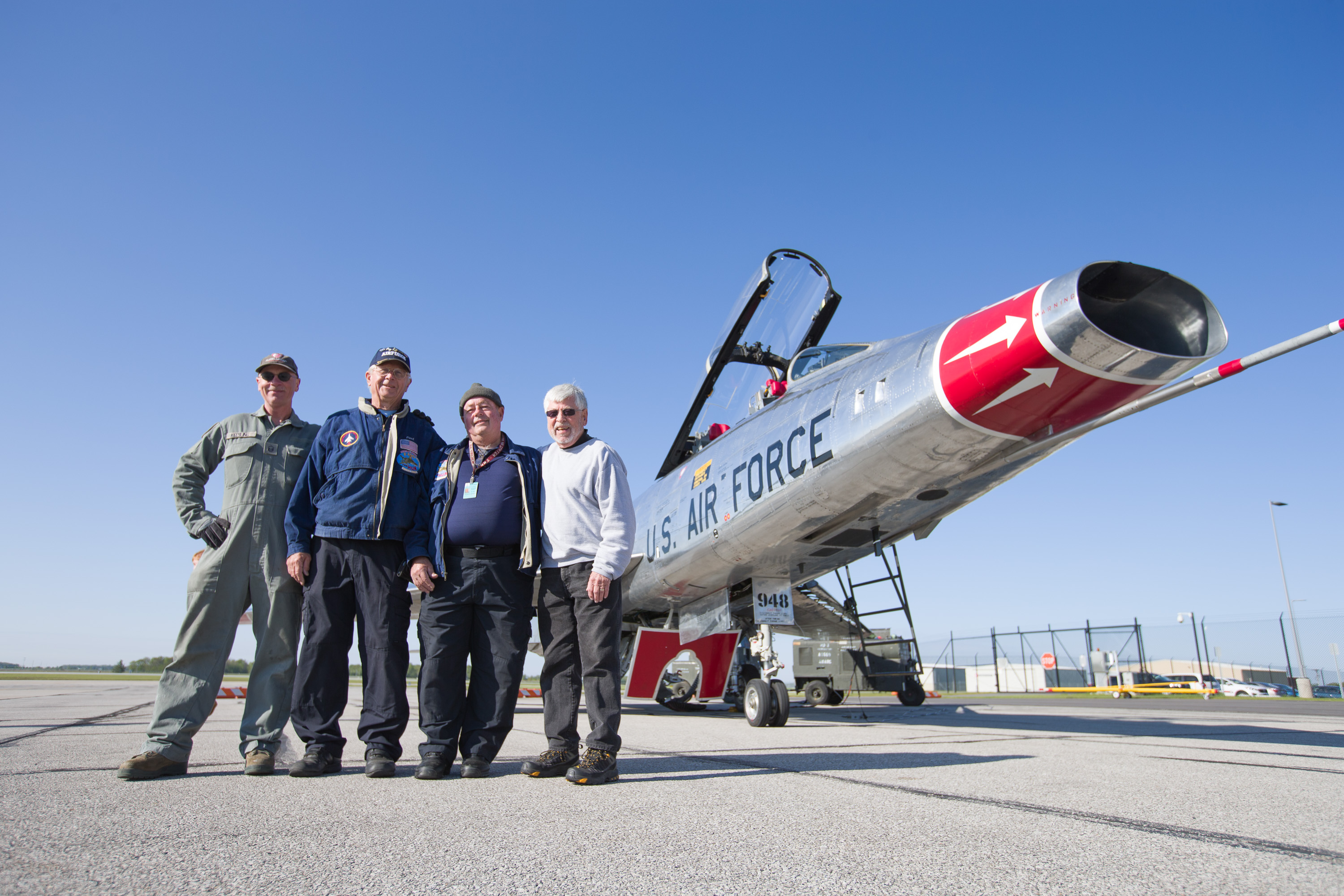 Prez and Swick were working through checklists on the ramp when Haerter, clad in a flight suit and rebuilt boots that he had worn in Vietnam, walked through the hangar and saw the F-100—a sigh of possibly nerves and relief gave way to an ear-to-ear grin, much like that of a groom when he first sees his bride walking down the aisle. His wife understands the love affair and jokingly called the fighter the “Iron Mistress.”

At $5,000 per one-hour flight to cover fuel (the F-100F’s J79-21B engine burns 1,000 gallons of Jet A per hour), the men who had flown it May 16 and 17 said the cost was worth it. Haerter joked that it didn’t cost him anything—it was just coming out of his children’s inheritance. (Other Super Sabre pilots have purchased $100 lottery tickets for a chance to be chosen to fly the fighter later in the week.)

After a quick briefing, Cutshall and Haerter strapped in, with Haerter giving his family a thumbs up before he taxied away. He had expected an “airplane ride,” but Cutshall lets all of the men fly the Super Sabre as much as they want from the rear seat. Haerter, who had 700 hours in the F-100C, taxied, took off, flew around northern Indiana performing rolls and steep banks, and made several low-level burner passes before Cutshall landed the aircraft (only because the pilot in the rear seat loses sight of the runway during landing). 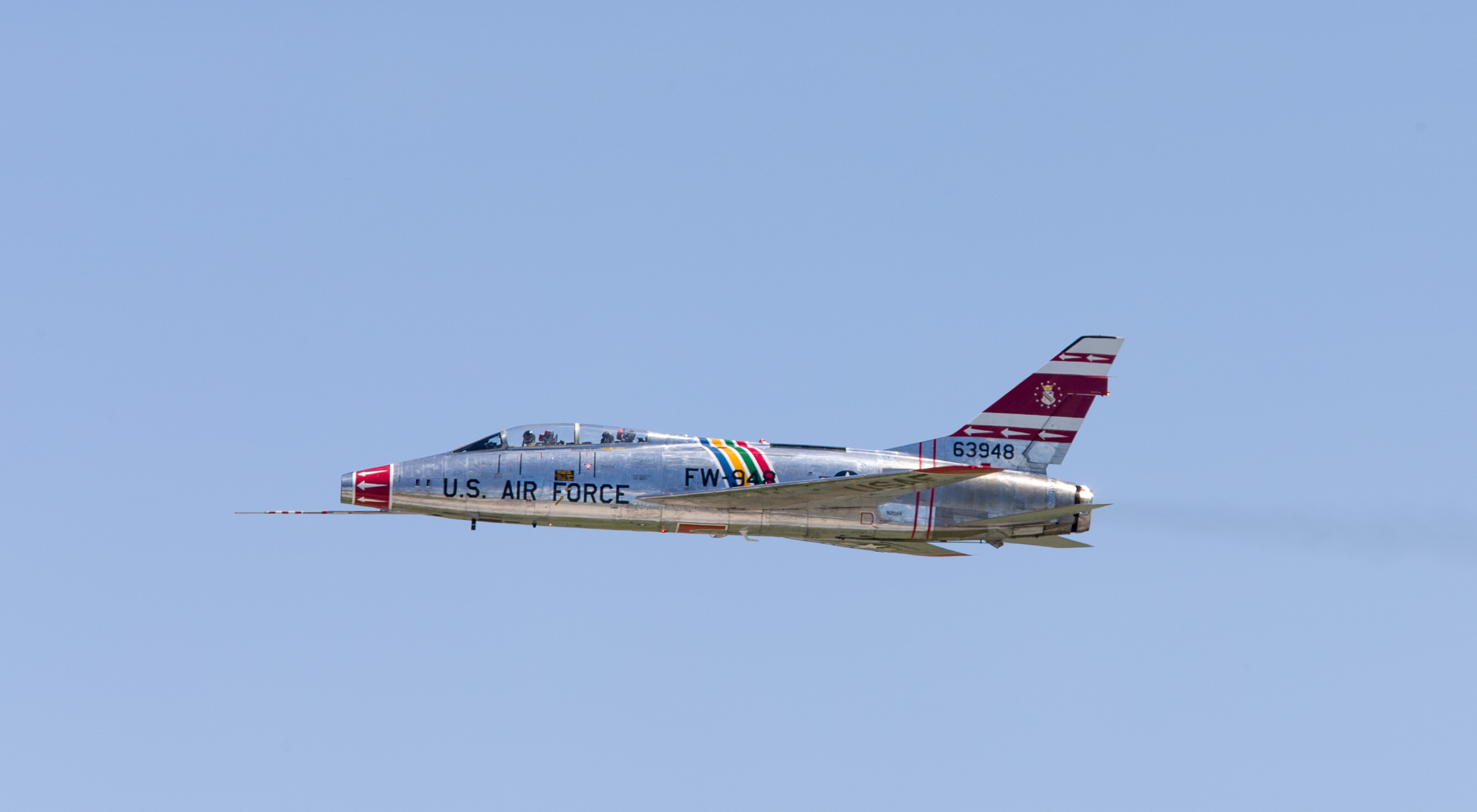 “Here he comes! Here he comes!” Nancy exclaimed as she heard the F-100 taxi up, immediately stopping reviewing the video she had recorded of the low passes on her phone.

Haerter gave a thumbs up and waved as the aircraft came to a stop. “Awesome! I haven’t been upside down, pulled Gs for how many years?” he shouted to his family as soon as the canopy opened. Later, he vowed, “I’m not leaving.”

“I’ve heard nothing but flying our whole married life, and we’ve been married a long time,” Nancy said. “Now I’m going to hear about this until I die!” 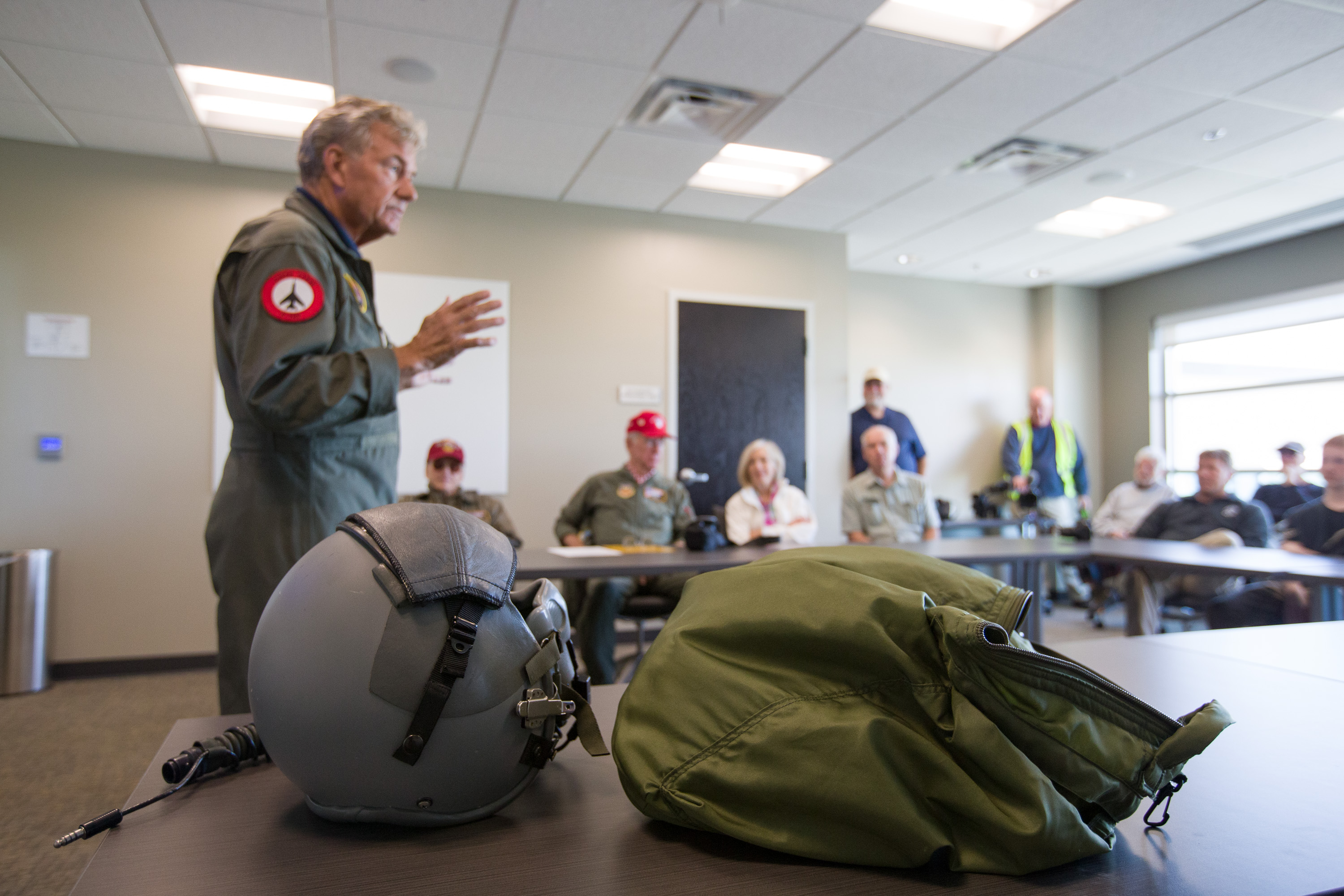 “You did an outstanding job for not touching the airplane for 47 years,” Cutshall said, adding that the takeoff was a little wobbly, but after two or three minutes in the air, Haerter was back to flying the F-100 like he probably did in the 1960s.

“We got out there and to feel that burner light the first time in many years, it’s exciting. It was just great,” he said after the debrief, his scarf folded and tucked back in the pant leg of his flight suit. It felt “like I’d never been gone.”