The Canadian Snowbirds aerial demonstration team performed an 18-wing salute to America during a rare flyover of Washington, D.C., before landing at Washington Dulles International Airport May 24 for an open house at the Steven F. Udvar-Hazy Center. 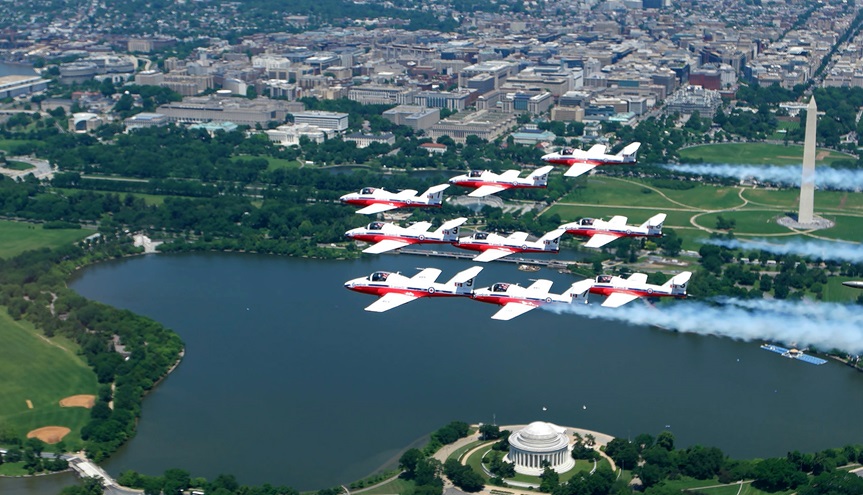 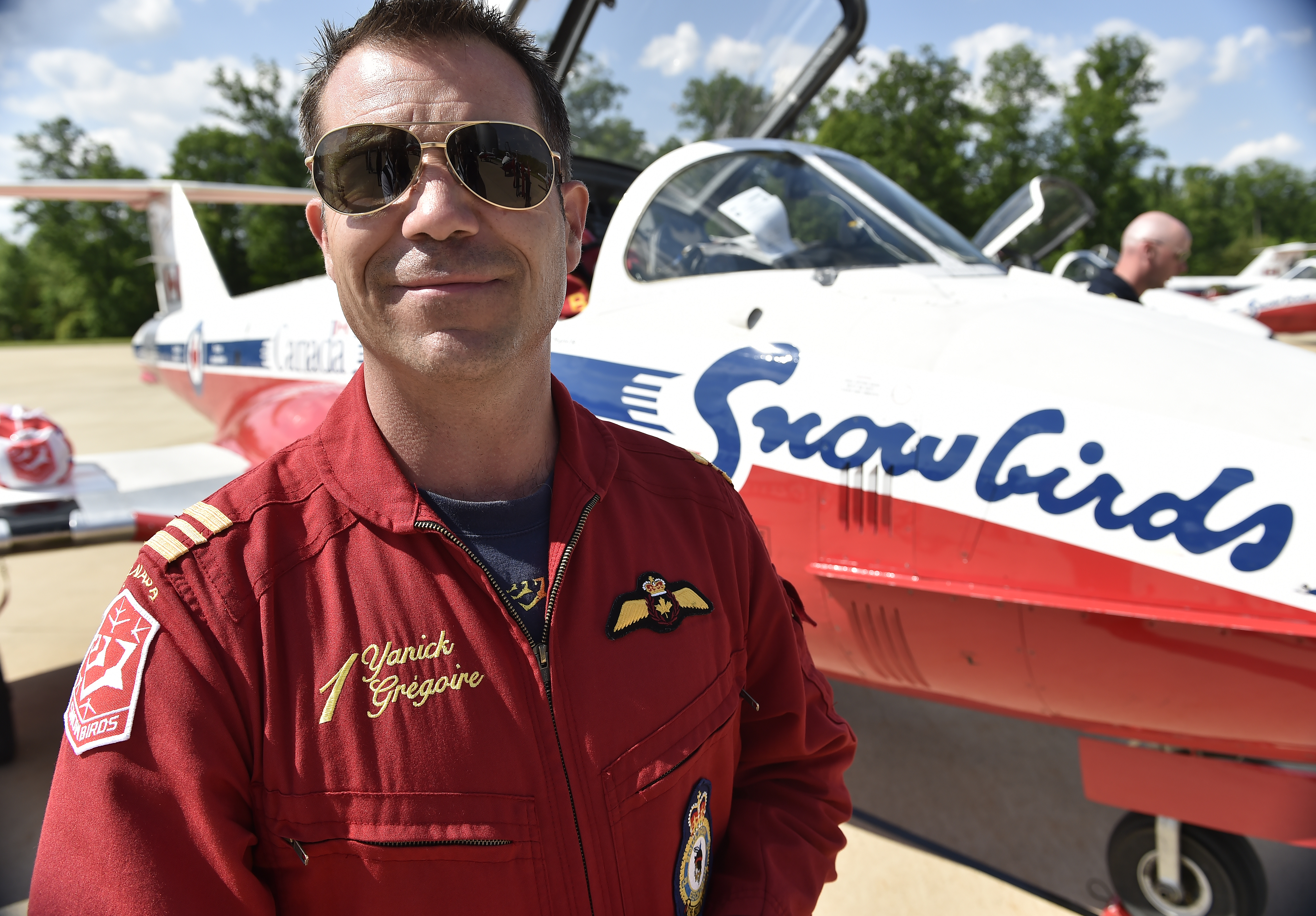 The friendship flight captured the attention of residents and visitors of the nation’s Capital who looked skyward as the nine jets crossed overhead under blue skies. The east-to-west route began over the Washington Nationals baseball stadium and ended above the Pentagon, said Snowbird No. 1 Maj. Yanick “Crank” Grégoire, who led the overflight.

“The luxury of being No. 1 is that I don’t have to look at any other airplanes, I just have to make sure I’m driving the train, so to speak, in the right direction,” Grégoire said after landing at Dulles.

Before the flight took place, months of negotiations with the U.S. Department of Defense, the FAA, and other security agencies made it clear to the 4,000-hour McDonnell Douglas CF-18 Hornet fighter pilot that he needed to keep the team in a tight formation over America’s most sensitive airspace. Grégoire studied the route numerous times on Google Earth, which he said was “an amazing tool” for planning the flyover.

Safety concerns were at the top of the list. The formation “boss” defended Canada’s airspace after the events of Sept. 11, 2001, so he said he understood the heightened security affecting U.S. airspace.

With Snowbird No. 3 to his left, No. 2 to the right, and the rest fanning out in a diamond, Grégoire savored the moment as his turbojet streaked above the National Mall. “I had several minutes of just being able to look out the window and enjoy the scenery … the Capitol building, the White House, the Naval Observatory, the Pentagon, it was amazing. And yes, I did have time to look at these great American landmarks.”

The Snowbird flying ambassadors use a two-seat, single-engine CT-114 Tutor jet for their close-formation flying performances said Snowbird No. 10 Capt. Blake “Naughty” McNaughton, who joined the Canadian Armed Forces in 2002. McNaughton explained that the control surfaces on the all-metal aircraft are moved by push rods; a General Electric J85-CAN-40 turbojet engine can power the nimble Tutor to 18,000 feet in less than six minutes. “It handles like a classic 1960s sports car. Not just a sports car, but a classic sports car.”

Snowbird pilots unloading their gear on the ramp praised the aircraft’s straight-wing design, its distinctive profile, and its cost-effectiveness as keys to the team’s success through the years.

During a flight debriefing, Canadian Ambassador to the United States David McNaughton (no relation) asked the team about replacing the distinctive but aging 50-year-old fleet of white, red, and blue jets.

Snowbird Commanding Officer Lt. Col. Brad Wintrup said upgrading the fleet has been mentioned but the team wasn’t in a rush to modernize. “We have enough airplanes in mothballs that we have nine more remaining and they’re fully serviceable.”

Naughty echoed Wintrup’s sentiment for the Tutor and praised its predictability and handling “because we have 46 years of practice in these aircraft” although he wished it had a bit more power and better fuel efficiency. 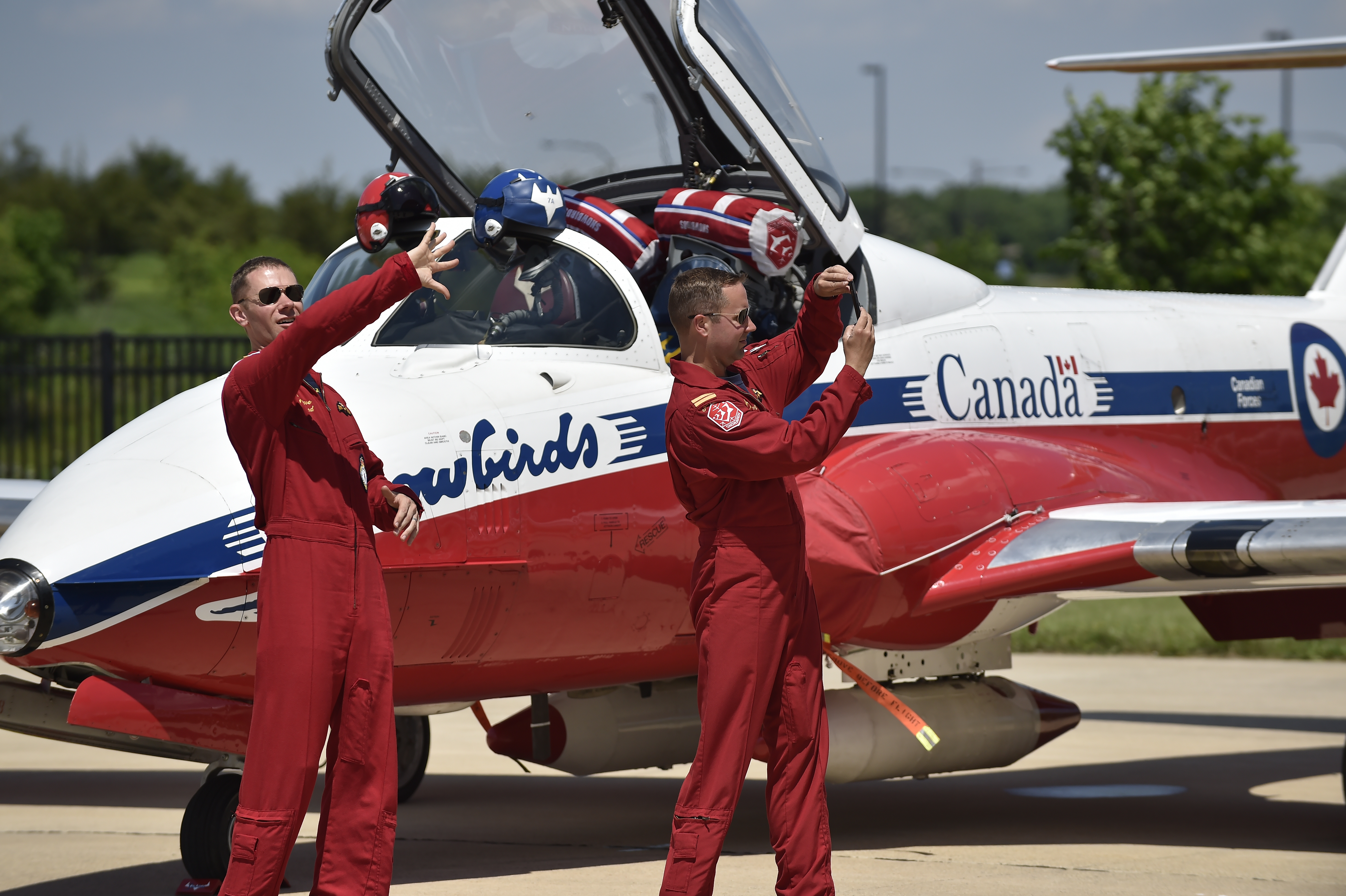 The aircraft, Naughty said, helps dictate the maneuvers the Snowbirds perform and contributes to its crowd-appeal: “People describe our show as a graceful ballet and we’re always on stage. With nine aircraft we can have six flying formation and bring in more from the sides.”

The ballet wouldn’t go on if its performers weren’t in top shape and they depend on each other every step of the way said Capt. Maciej “Match” Hatta, who earned his wings in 2008 as a tactical fighter. “We have to be able to work together and survive together cohesively. It’s kind of like a marriage, essentially.” He cited the relationship “between you and your technician, who takes care of the jet and backs you up and then there’s the marriage between you and your airborne teammates as well.”

Potential Snowbird pilots are part of an active military unit that represents the skill, professionalism, and teamwork of all the men and women in uniform in Canada, said Hatta. Becoming a Snowbird pilot takes years of training and “pilots aren’t given preferential treatment from any one pipeline,” he said. “You have to do at least a tour [of duty] preferably on an ejection-seat aircraft just so you gain the high-performance jet features and [understand] the type of flying you are expected to do as part of the Snowbirds.”

From there it’s a definitive tryout process, Hatta said, with a call for candidates at the end of each year. “From there we sit down and select up to eight names for a tryout. We have a good look at their resumes, their personalities, and how they’ve worked in a group team environment,” he explained. Hatta said eight flights are evaluated for performance standards, safety, and attention to detail. “Essentially it’s all the basic elements of the show that we do.” Current Snowbirds select generally half of the team to be new members for the following year, said Hatta.

The Snowbirds’ teamwork extends to its aircraft mechanics and its ground- and air-based support crew, too.

Structures technician Cpl. Marc-Andre De-Serras is an eight-year military veteran who sits in the jet side-by-side with a pilot as they crisscross the country for airshows during the seven-month season. The airframe technician is in his rookie year with the Snowbirds and sits above his name stenciled in blue outside of the cockpit—another nod emphasizing team spirit. De-Serras said his right-seat view affords him a better feel for the aircraft’s nuances so he can spot small issues before they develop into big problems. 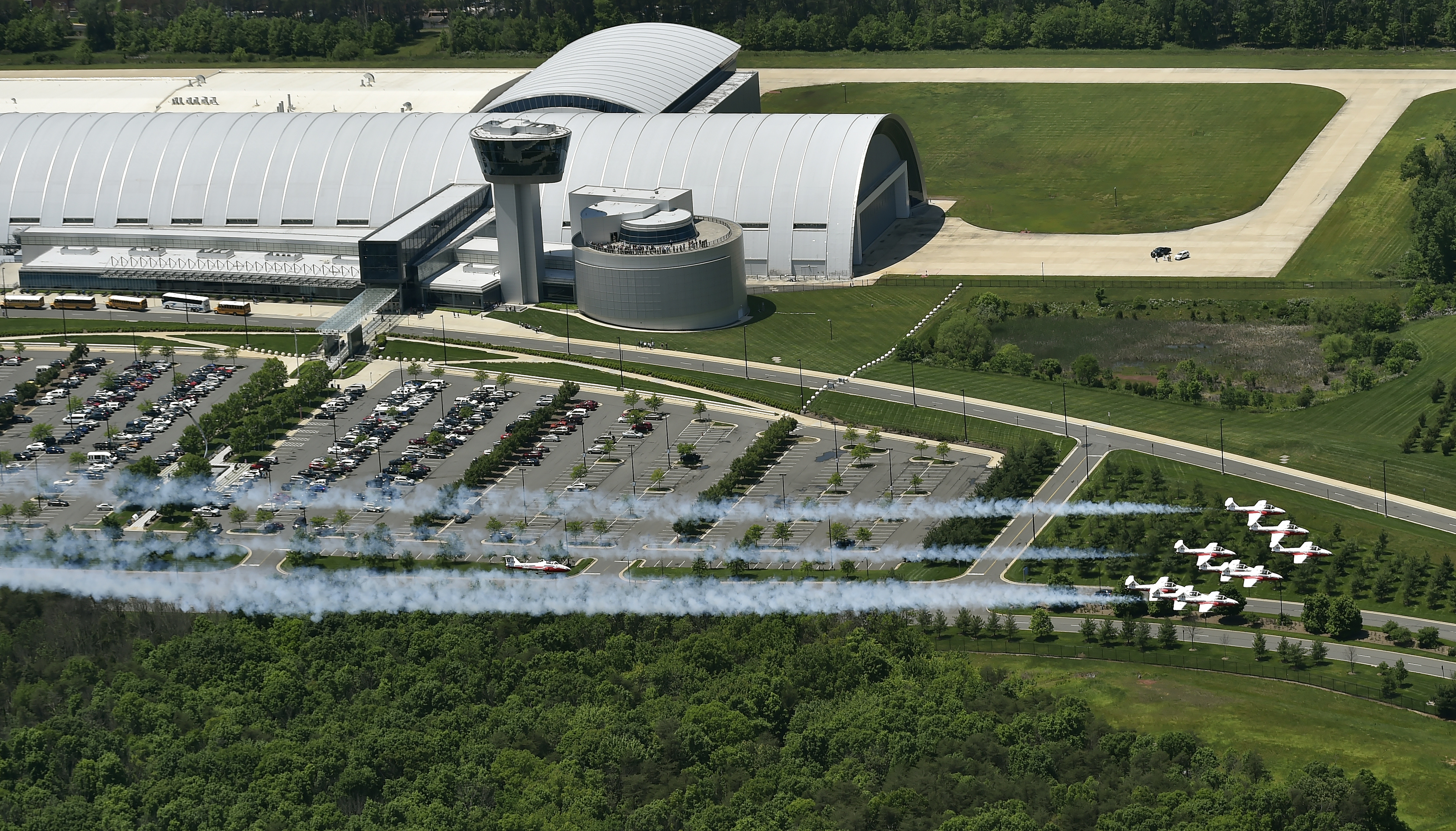 As the Snowbirds scrambled through the Steven F. Udvar-Hazy Center en route to a film festival at the Canadian embassy, members of the flight crew were stopped by museum visitors seeking autographs or reaching out to give them a pat on the back.

The flyover was timed to coincide with airshows in Pennsylvania and New York, and a Royal Canadian Air Force public service announcement said the carefully planned and closely controlled aerial demonstration was “a Friendship Salute to highlight the relationship between Canada and the United States of America.”

“The first pass went real good, so we got turned around and got to do it all over again,” said Grégoire.

The Snowbirds will perform their aerial dances from the East Coast to Montana, including a stop at EAA AirVenture July 30 and 31, before ending their season in front of a Canadian home crowd in Moose Jaw, Saskatchewan, Oct. 14.