Get the app Get the app
Already a member? Please login below for an enhanced experience. Not a member? Join today
News & Media DJI takes Hollywood turn

DJI, the world market leader in small drones, hired Academy Award-winning cinematographer Claudio Miranda to create a short film shot entirely with the Inspire 2, announced Nov. 15, and prove a point that a system that costs about $6,000 (excluding extra batteries and other accessories) can produce professional-grade results. The short film Miranda created, The Circle, was released on YouTube the same day the new flying camera was announced. The film has star power from Ryan Phillippe and Noah Schnapp on the screen, but the real star of this show is the long-anticipated Inspire 2, which can tote multiple camera systems including the new Zenmuse X5S camera, an upgraded version of the X5 camera released a year before for the Inspire 1 Pro. The Inspire 2 itself is also a more capable machine than its predecessor in many ways, with increased redundancy, improved obstacle avoidance capabilities, speed, range, and a wider operating temperature range thanks to a built-in battery warming feature that facilitates flight in temperatures down to -4 degrees Fahrenheit.

“Professional filmmakers and photographers always push to create images that have never been seen before, and DJI never stops trying to give them the tools to achieve their vision,” said DJI founder and CEO Frank Wang, in a press release. “Our newest flight platforms and stabilized aerial cameras are smarter, faster and more powerful than ever before. We can’t wait to see how creators use Inspire 2 and Phantom 4 Pro to capture dazzling images.” 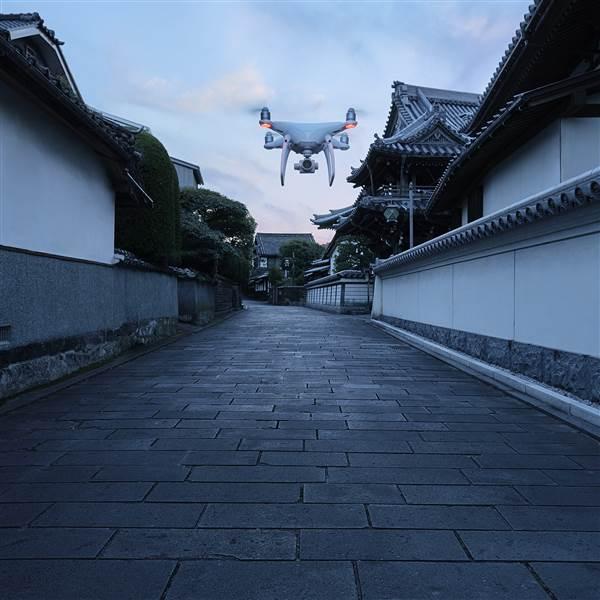 The Phantom 4 Pro is an updated version of the Phantom 4 quadcopter, a smaller model made for consumers and semi-professionals, which DJI released in April. The Phantom 4 was the first DJI drone to include forward-looking obstacle detection sensors, and both of the newest DJI models build on that capability with additional sensors to detect obstacles below and to the sides of the aircraft during flight. The flight control system and sensor package allow each aircraft to avoid obstacles if a loss of control signal prompts an automated return to home (starting with the last position where the electronic connection between controller and aircraft was established).

The Phantom 4 Pro (with a retail price of $1,499, or $1,799 with a controller that has a built-in display) still comes with a single camera and fixed lens, while the Inspire 2 will support two gimbal and camera systems. One of those, the X5S, will support up to eight interchangable Micro Four Thirds lenses, ranging from wide-angle to telephoto. (Users have found that the X5 and X5R camera/gimbals can mount different lenses not officially approved by DJI).

The overall imaging capability of the Inspire 2 is also much improved: With the new model, DJI has released the CineCore 2.0 image processing system. The image processor is now built into the airframe rather than the (detachable) camera/gimbal. The new imaging system makes the Inspire 2 capable of filming in industry standard RAW formats, allowing editors and producers to enhance images in post-production. (The previous Zenmuse X5R, made for the Inspire 1 Pro and originally sold at a price about $2,000 higher than the X5, also allows filmmakers to record RAW format video.)

“What’s fantastic about this drone is that we’re able to shoot in the RAW format,” Miranda said of the Inspire 2, in a news release. “It’s nice to have that dynamic range, so I’m able to push shadows up or highlights down and create a mood.”

DJI’s Zenmuse X5S provides the same 12.8 stops of dynamic range (ability to capture light and dark subjects in the same image) as the X5 and X5R systems designed for the Inspire 1.

The Inspire 2 is immediately available for preorder online from DJI for $2,999 (cameras are now sold separately, unlike the Inspire 1). In addition to improved imaging, the Inspire 2 also offers upgraded aircraft performance, with a published top speed of 67 mph and the ability to accelerate to 50 mph in four seconds. It can also climb at 6 meters (19.7 feet) per second and descend at 9 meters (about 30 feet) per second, making it capable of dramatic vertical crane up or down shots. The improved obstacle avoidance systems may come into play if operators get a little carried away.

“DJI’s technology is allowing filmmaking to be free,” Phillippe said in a DJI release, referring to the ability of even low-budget filmmakers to create shots with a stabilized flying camera. “The advantage is obvious on smaller projects when you can’t afford cranes and all of the technicians that come along with it, and you can still achieve the same beautiful shots as with the larger equipment.”

DJI announced the new models, and the release of the film Phillippe stars in, at the Warner Bros. studio lot in Los Angeles, clearly taking aim at the professional cinematography market. 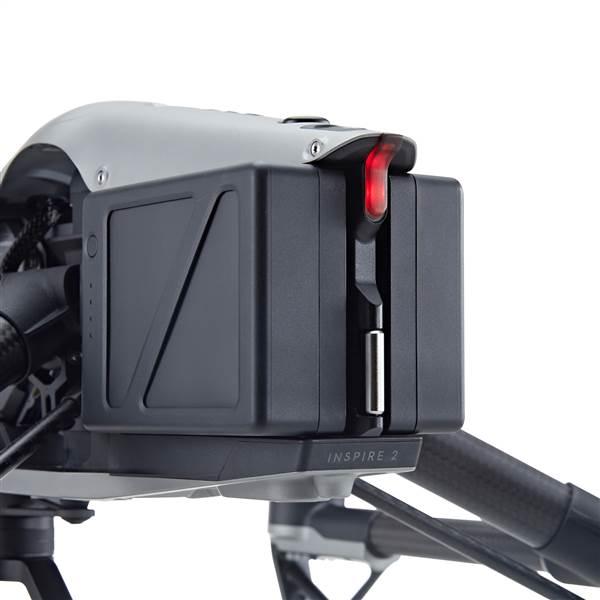 The Inspire 2 uses a brand-new battery, two of them, in fact. The extra battery improves performance as well as redundancy, allowing the aircraft to continue flying if one of the batteries fails.

The flight control system of the Inspire 2 has also been updated, with a redundant inertial management unit (IMU), and DJI also added a first-person-view (FPV) camera to the Inspire 2 which allows the pilot to have a dedicated, forward-looking view while a second operator controls the camera independently. This removes the need for the pilot to take control of the camera to reestablish spatial orientation during flight. It also, combined with the new obstacle sensing capabilities and automated return-to-home with obstacle avoidance, appears to pave the way for DJI drones to fly beyond line of sight (the improved Lightbridge 2 video transmission system and flight control system have a published maximum range of 5 kilometers, which is beyond most people’s visual range). It remains to be seen if the FAA will issue waivers allowing Part 107 operators to take full advantage of these capabilities.

DJI, in the product announcement, offered pre-order customers a $6,198 Inspire 2 combo which includes the aircraft, Zenmuse X5S, and CinemaDNG and Apple ProRes license key. The company said customers who order through Jan. 1 will be offered a $5,999 price for the combo, though that deal was not immediately available on the DJI website. The Phantom 4 is expected to start shipping later in November, while the Inspire 2 combo will begin shipping in December; Inspire 2 components purchased separately will begin shipping in January, DJI said.