Storytelling galore dominated the celebration of life for revered aviator Robert A. “Bob” Hoover, just the way the great storyteller himself would have wanted it. Hoover, who died Oct. 25 at age 94, was known for his ability to keep an audience spellbound with his countless flying stories spanning a lifetime in aviation.

Some 1,500 people descended upon Clay Lacy Aviation at Van Nuys Airport in California to remember the remarkable pilot and showman, described by Jimmy Doolittle as “the greatest stick and rudder man who ever lived.” Hoover protégé Sean D. Tucker, himself a world-renowned airshow pilot, and airshow announcer Danny Clisham were masters of ceremony for the celebration, which included comments and reflections from such aviation greats as Clay Lacy and Harrison Ford.

After the remarks, a flyby of modern aircraft and warbirds occurred, representing the eras of Hoover’s long life.

After the ceremony, many attendees moved to the AirTel Plaza Hotel where the party continued, just as he would have wanted it to. Hoover was a regular at parties surrounding aviation events from EAA AirVenture to the National Business Aviation Association to the Reno Air Races.

While many will miss Hoover’s frequent attendance at aviation events, his principles and ideals as a person and pilot will live on through the annual awarding of the Hoover Trophy, which is managed by AOPA. Hoover himself won the first presentation of the trophy in 2016 at the National Air and Space Museum’s Steven F. Udvar-Hazy Center in Chantilly, Virginia. That ceremony took place in the shadow of the recently unveiled life-size bronze statue of Hoover and next to his beloved Shrike Commander, in which he performed his signature dead-stick landing routines. The next presentation of the Hoover Trophy will occur in late winter or early spring 2017. It will be presented to someone who “exhibits the airmanship, leadership, and passion for aviation and life demonstrated by R.A. ‘Bob’ Hoover during his distinguished career as a pilot and aviation advocate while also serving as a source of inspiration and encouragement for current and prospective aviators.” 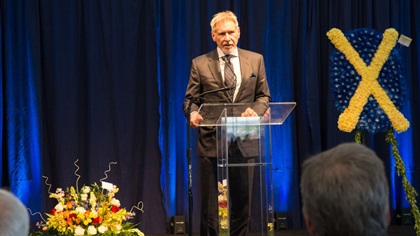 Hoover left enormous shoes, which probably no one can fill, but the trophy may inspire others to attempt to live up to the standards of one of the truly great ones who left us last month after a most remarkable life.

During the Celebration of Life, Hoover was remembered by numerous test pilots and airshow pilots as one who was willing to tell it like it is, pointing out times and situations where the pilots were taking too many risks or not behaving in ways that represented pilots well. 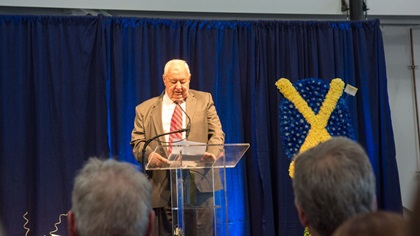 Ford asked attendees to consider what Hoover would want them to do with what is left of their lives. Hoover had expressed to numerous close friends before his passing that he wanted others to pick up the mantle of encouraging youth to become involved in aviation and to make aviation more available and friendly. Like other close friends, Ford declared, “I was honored to know Bob.”

Friend, neighbor, and business partner Brian Cochran declared Hoover was a great American whose life reminded him of the Hunter S. Thompson quote, “Life should not be a journey to the grave with the intention of arriving safely in a pretty and well preserved body, but rather to skid in broadside in a cloud of smoke, thoroughly used up, totally worn out, and loudly proclaiming ‘Wow! What a Ride!’”

Hoover remains the only pilot to ever have taxied an airplane into the National Air and Space Museum’s Udvar-Hazy Center when he and a copilot flew his Shrike Commander from Florida to Washington Dulles International Airport, where it was going on permanent display. Dorothy Cochrane told of Hoover taxing from the runway to the center and then taxiing under power right inside the building as she and the museum director stood by in awe. 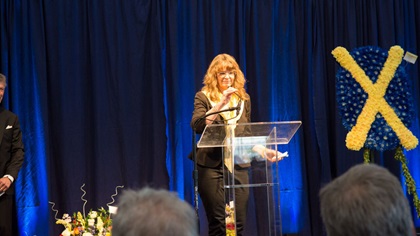 Randy Fry of Fry’s Electronics was a sponsor for Hoover’s airshow act in the 2000s. During Fry’s first airshow visit with Hoover, he offered the electronics executive the right seat, but as they were preparing to taxi out FAA officials stopped them, asking about their intentions in the shadow of the upcoming airshow. Hoover declared they were just burning off a little excess fuel before his airshow routine. After takeoff Hoover put Fry through nearly all his usual routine. During the flight, Hoover used zero Gs to cause his famed Panama hat to float back through the cabin and land upright on the back seat, all without looking back, an experience that Fry remembers to this day.

Filmmaker Kim Furst reminded everyone of Hoover’s generosity and grace. “It was never about him. It was about you whenever he was talking with you. I was honored to be able to document his amazing life,” Furst said, referring to her film, The Bob Hoover Project, Flying The Feathered Edge.

Later outside, three flybys represented the elements of Hoover’s life. The first included a Sabreliner business jet, which Hoover demonstrated extensively; a U.S. Air Force Thunderbirds F-16; and a Canadian Snowbirds Tudor jet. Seconds later, an F22 and two F86s—Hoover’s favorite—made a low pass in front of the crowd. Finally, a P40, a Hellcat, and the famed Ole Yeller P-51 Mustang that Hoover flew for decades made a final pass with the P-51 pulling up into a missing man formation as it passed in front of the guests.

Contributor (former Editor in Chief)
Contributor and former AOPA Editor in Chief Tom Haines joined AOPA in 1988. He owns and flies a Beechcraft A36 Bonanza. Since soloing at 16 and earning a private pilot certificate at 17, he has flown more than 100 models of general aviation airplanes.
Go to Thomas B Haines's Profile
Topics: People