Get the app Get the app
Get the latest news on coronavirus impacts on general aviation, including what AOPA is doing to protect GA, event cancellations, advice for pilots to protect themselves, and more. Read More
Already a member? Please login below for an enhanced experience. Not a member? Join today
News & Videos Texas teacher 'just asked' for airplane build class

Before Georgetown, Texas, engineering teacher Dan Weyant could introduce an airplane build project to his high school students, he needed to get buy-in from the school system. His solution was simple: “I just asked.” 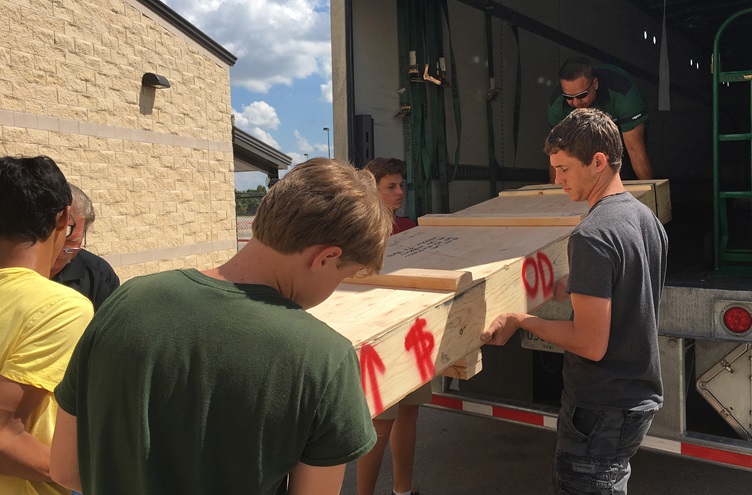 The science, technology, engineering, and math-driven (STEM) aircraft build project required seed money and a commitment from the Georgetown Independent School District to get off the ground.

Weyant had an idea. First he took county officials up in a friend’s Cessna Cardinal to visit a completed Van's Aircraft RV-12 assembled by Eagle's Nest high school participants; then he made the sales pitch to his school district. The airplane ride opened their eyes to the possibilities and “it really wasn’t that hard of a sell,” said Weyant. “They didn’t tell me until afterwards that they were both terrified.”

Weyant then borrowed the two-seat RV-12, removed its wings, and “drug it around town on a flatbed to the two high schools” that he had in mind for the program with plans to show it off at lunchtime. He originally wanted the airplane to take center stage in the schools’ cafeterias, but that backfired when he found the doors were “six inches too short for the horizontal stabilizer” to fit through.

Instead, the aircraft remained outside while high school students peered at it through their lunchroom windows. “I learned a lot about doors that day, but fortunately we had good weather and it wasn’t hard to get a lot of kids to check it out anyway,” he told AOPA.

Weyant said 55 students signed up “and we only had room for 24.” Parents and others were recruited to help supervise three shifts of classes so the students could take turns learning about the principles of flight, aircraft construction techniques, and regulations.

Tango Flight LLC was born as a joint project between Georgetown and East View high schools located a few minutes from Georgetown Municipal Airport. Twelve students from each school are participating in extra-long class blocks to construct the aircraft as part of Project Lead the Way, a nonprofit educational experience that began its life about 20 years ago as the frontrunner of today’s STEM curriculum, said Weyant. Project Lead the Way’s interactive learning environment helps provide teachers with the training and resources they need, said Weyant, and empowers students with hands-on experiences.

East View’s Pierce Treadway, 16, was enthusiastic as he explained his role in the airplane construction project. “I’m excited,” said Treadway, who helped inventory a crate of empennage parts and supervised tool check-outs to his classmates. “We’ve started practicing on rivets and already learned the three types: dome rivets, flush, and pop rivets.”

Treadway would like to pursue engineering when he enters college in a few years and hoped the airplane project would provide a valuable real-life experience. “I feel that if I know a whole bunch of trades it will help me out more than if I concentrate on just one thing.”

Weyant brings practical experience to the table as the builder of an RV-9, along with his wife, and he is currently restoring a Piper J-3 that his grandfather once owned.

He enlisted like-minded mentors to help keep the students on track. An initial meeting to get things rolling drew more than 100 interested in pushing the project along.

Weyant told the crowd the price tag would likely approach $75,000. That’s when aviation enthusiast Sam Smith volunteered to help with fund raising. Cleveland Air Tools pledged thousands of dollars of equipment at their cost “so it saved us a lot right there,” he said. When “the city gave us $15,000,” Weyant said knew he was onto something and he complimented the “amazing” community.

Many of Tango Flight’s students are in Weyant’s engineering classes for all four years of their high school career, and he hopes to make the build program a permanent fixture. “There’s nothing horribly difficult about this, but if the less experienced kids can become more experienced with it, then that helps me out as well.”

Both high schools are each less than 10 minutes from the Georgetown airport. As part of their experience, students also assist and observe various functions of a working airfield. His goal is to rotate them around the airport including spending time with mechanics, flight line personnel, controllers, and the three fixed-base operators on the field.

“Once we get some things that look like an airplane put together,” said Weyant, “there should be even more interest. We’re making up a lot of this as we go, but that’s part of the fun.”