A Florida pilot touched down on U.S. soil Sept. 19 after circumnavigating the globe, and her team claims it is the first time a Chinese person has flown a single-engine airplane solo around the world. 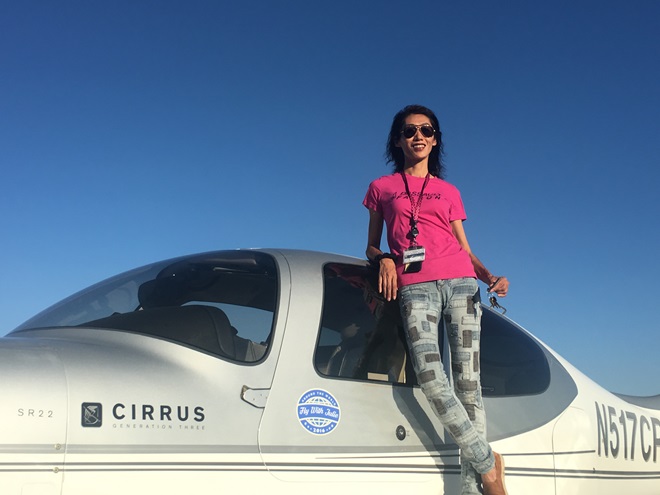 Wang, who has airline transport pilot and flight instructor certificates, is chief flight instructor of Zulutime Pilot, a Part 141 flight school in Stuart, Florida. She began flying in 2011 and had logged 1,600 hours before departing on the trip.

Born in Dalian, China, Wang said that as a child she dreamed of being a pilot, but “I had no chance to be a pilot. I almost forgot about it.” She worked in global advertising. When Wang and her husband relocated to the United States in 2010, Wang said, “I had to rethink what I wanted to do.”

After earning a private pilot certificate in 2011, Wang went to EAA AirVenture that year and met Wei Chen, who had just become the first Chinese man to fly around the world. Though Wang had never considered that type of challenge, meeting Chen “planted a seed in my mind,” she said.

Chen, a member of the Board of Directors of AOPA China, called Wang’s flight historic and inspirational to everyone who loves flying. “She is a true aviator,” he said in a press release.

In July at EAA AirVenture 2016, Wang discussed her plans for the trip, saying she had waited years after her meeting with Chen to ensure that her flying skills were more developed. The biggest challenge, she said, would be flying 2,200 nautical miles over open water. “I have never done that,” she said.

Wang also said she was looking forward to landing in her home country, though she spent just one day in China. Her route took her from California to Hawaii, the Marshall Islands, Micronesia, Guam, and the Philippines. She landed in Haikou, China, before overflying Vietnam and Laos to touch down in Thailand. From there, Wang overflew Myanmar and Bangladesh before landing at Ahmedabad in India.

Wang departed India and touched down in Abu Dhabi in the United Arab Emirates, overflying Pakistan, Oman, Qatar, Bahrain, Saudi Arabia, and Egypt. She landed at Crete and Malta before completing legs to the Azores and Newfoundland.

Wang said she worked closely with AOPA China, and that one of her goals for the trip was to communicate to Chinese citizens that “if they have dreams, to go forward.” She also said she hopes her journey inspires other young women to pursue aviation.

AOPA China will present Wang with a 1 million Yuan Renminbi prize (about $150,000) for being the first Chinese woman to complete an around-the-world flight.