The FAA has set June 5 as the date when use of the international flight plan format, also known as the International Civil Aviation Organization (ICAO) format, will be required for all civil flight plans filed with flight service for flights within the National Airspace System and to Canada. 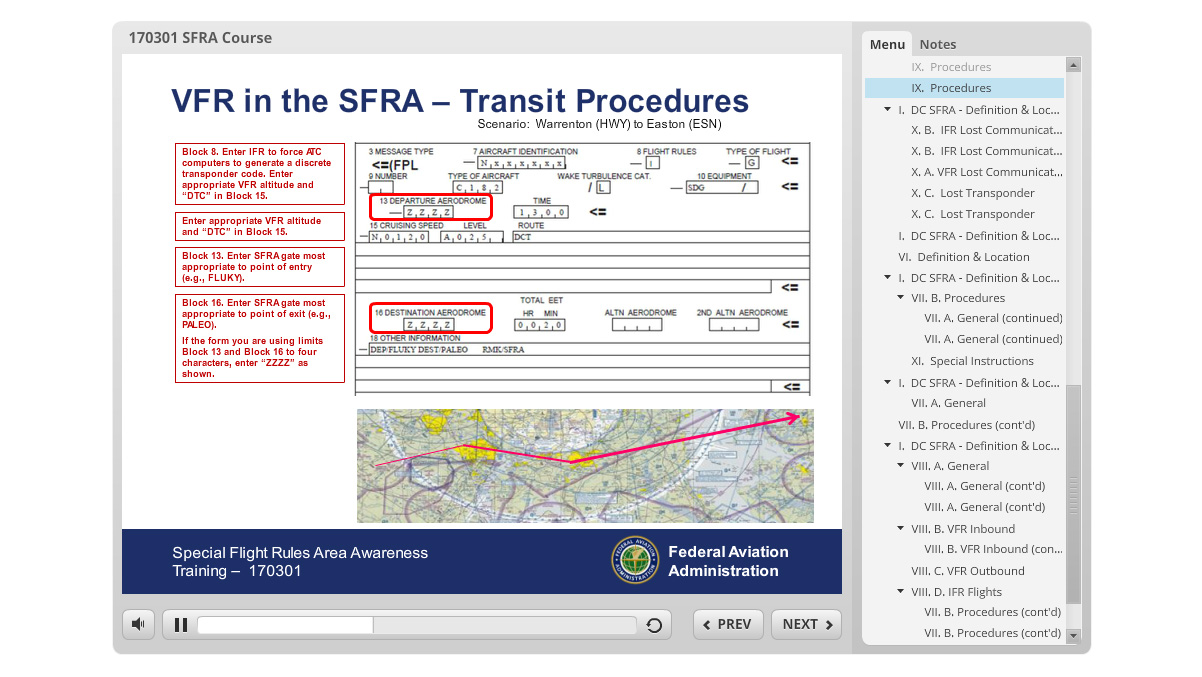 This updated slide shows how to file an SFRA flight plan using the new ICAO format.

The FAA’s original implementation date of October 2015 was revised at AOPA’s request to allow ample time to communicate the change to pilots and accommodate automation enhancements and test schedules for the three flight service vendors: CSRA, Leidos, and Harris.

Pilots who file flight plans with third-party vendors (non-FAA contracted providers) should follow the guidance given by those providers. Some providers may require that the domestic flight plan format be used temporarily while automation upgrades to their system are completed.

The FAA’s international flight plan form (FAA Form 7233-4) has been required by IFR filers under certain circumstances since 2012. Already well utilized by the airlines and others taking advantage of advanced navigational services, the international format has been available for voluntary use by domestic IFR flight plan filers. With the June 5 change, the ICAO form will be required for all IFR and VFR users of flight service systems for flights within the NAS.

The FAA has been conducting outreach with AOPA and other organizations to ease the transition.

“AOPA has worked closely with the FAA on the implementation of the ICAO flight plan modifications and automation enhancements for flight service systems,” said Rune Duke, AOPA director of airspace and air traffic. “Some commercial or third-party non-flight service providers may want to implement similar enhancements, and will need additional time to implement these changes.

“Pilots using commercial or third-party providers should file domestic, international, or Special Flight Rules Area (SFRA) flight plans using the ICAO flight plan format beginning June 5; however, the domestic format may remain available on some third party systems after June 5, until their system is upgraded,” he said. “Pilots may use the domestic flight plan format provided on these non-flight service websites during this short transition period.”

Some of the more pronounced changes on the flight service systems will be experienced by pilots filing Washington, D.C., SFRA flight plans—so the FAA has updated its online SFRA training course, incorporating suggestions from AOPA. Pilots who fly within 60 nautical miles of Washington, D.C., who have already taken the SFRA course are not required to take the course again, but are encouraged to do so to learn about the changes.

Most online filing sites allow pilots to enter the proper gate—for example, FLUKY, without having to enter ZZZZ. Pilots should follow the guidance provided by their chosen service provider.

“Pilots flying in the SFRA can still expect to enter information in the altitude field as they do now, such as VFR/035,” Duke said. “This is helpful to air traffic control, as it is one way to remind them that this is an SFRA flight.”

The procedures for filing security flight plans, SFRA and Flight Restricted Zone (FRZ) under the ICAO format will be similar to the current procedures, he said.

New guidance, on which AOPA collaborated with the FAA, is expected to be included in the November 2017 edition of the Aeronautical Information Manual. “This new guidance is available online for pilots to refer to as they familiarize themselves with the latest version of the ICAO flight plan,” Duke said.

In a related revision, pilot knowledge exams are being updated to eliminate references to the domestic flight plan form in test questions.

Leidos has been preparing for the transition. “Enhanced and improved flight plan filing capabilities are integral to the continued safety of civil aircraft. Leidos Flight Service, along with the FAA and our third-party vendors, have been focused over the last several months on specialist training, online implementation, and testing of the new form on our system. We are proud to bring enhanced safety features to our pilot community through use of this new format,” said Leidos Senior Vice President of Transportation and Financial Solutions Paul Engola.

For more information, pilots are encouraged to check out this AOPA Pilot Information Center video about the ICAO flight planning form, and visit AOPA’s Flight Planner, which has a tool to assist with the selection of equipment codes and other technical questions. Pilots having difficulties filing a flight plan after June 5 should contact Flight Service (800/WX-BRIEF) for assistance.

“It is highly recommended that pilots give the new flight plan format a dry run in advance of the date its use becomes mandatory,” Duke said.