Airbus Perlan Project Chief Pilot Jim Payne expects the 17-mile vertical climb he aims to make in a glider will be easier than some might think.

Payne, who began his hall-of-fame soaring career at the U.S. Air Force Academy, has reason to be confident and cool about piloting a glider into the last 3 percent of Earth’s atmosphere. The Perlan 2 glider is designed for extreme altitudes, and has handled as expected as the team has caught progressively stronger mountain waves.

The Airbus Perlan Project team topped 26,000 feet in 2016 over Argentina, a prelude to the near-mesospheric heights they hope to achieve in the coming months. On April 22, Payne and flight test engineer and copilot Miguel Iturmendi caught a mountain wave over Nevada that lifted them to 30,690 feet, the highest mark yet in a methodical program of expanding the glider's altitude envelope in 10,000-foot increments.

Payne, who was interviewed in an online video chat with AOPA four days after the latest flight from Minden-Tahoe Airport, said the glider’s flying qualities were not significantly different between the tow release at about 10,000 feet and Flight Level 300, the sailplane having been optimized for high altitude flight.

Temperature control remains the team’s biggest engineering challenge, and it can be warmer inside that cockpit at high altitude than you might think, though the flight suits are well-insulated. The instruments that will measure atmospheric characteristics, avionics, and a pair of human pilots who each produce roughly the same thermal energy as a 100-watt incandescent light bulb, are all contained in a carbon composite envelope designed to maintain internal pressure; ventilation is not an option.

"At very low altitude it tends to get warm," Payne said. He also described a comfortable, steeply reclined seating position that "is kind of like flying your easy chair."

Those flying easy chairs occupied by Perlan pilots are part of an 1,800-pound, carbon composite package that is expected to eventually race through the upper reaches of the atmosphere at more than 400 knots true, far higher and faster than any known easy chair, or sailplane. Nor can any overstuffed recliner be expected to match an average climb rate of 500 feet per minute through 80,000 vertical feet, or more, as Payne expects Perlan 2 can do.

The team stands to make many scientific discoveries during the flights that it plans to launch from Argentina in July and August, when the polar vortex is expected to boost stratospheric mountain waves to the kind of power that give the engineless aircraft a climb rate that has peaked at nearly 3,000 feet per minute under ideal conditions, Payne said.

All that wind power lifts the sailplane toward space with surprising smoothness, the veteran glider pilot noted.

“Most powered pilots that have had mountain wave encounters have flown through the rotor, which is a low-altitude area of turbulence that is underneath the peak of the wave. Typically, that extends from near the surface to slightly above the ridge or the terrain that’s causing the mountain wave,” Payne said. “I have flown many long wave flights in this extremely laminar air listening to air traffic control taking complaints from everybody that is encountering severe turbulence.”

Payne has probed the narrow margin between bumps and lift more than once.

Among a variety of scientific instruments on board will be NASA-inspired CubeSats—small, self-contained experiments designed by high school students that engage young minds by launching their work into space, or close to it, in the case of the glider. Payne said Perlan shares the desire of NASA, AOPA, industry leaders including Airbus, and so many others who are eager to inspire future generations of aerospace pioneers.

As Perlan 2 works its way up to its high-altitude and as-yet undiscovered limits, more mundane questions also stand to be answered regarding cockpit comfort. Will it get cold enough inside the carbon fiber cocoon of the Perlan 2 fuselage to overpower the flight crew’s electric apparel, including the battery-powered vests and pants Payne has been experimenting with, or will it go the other way?

“Some people think we may have trouble with excessive heat,” Payne said. “We’ll see.”

Airbus became a Perlan Project partner in 2014, bringing both funding and technical expertise to bear on the sailplane altitude record—currently at 50,772 feet, as set by Perlan Founder Einar Enevoldson in 2006 over Argentina. That could be doubled, if the winds and glider all perform as the chief pilot expects they can. 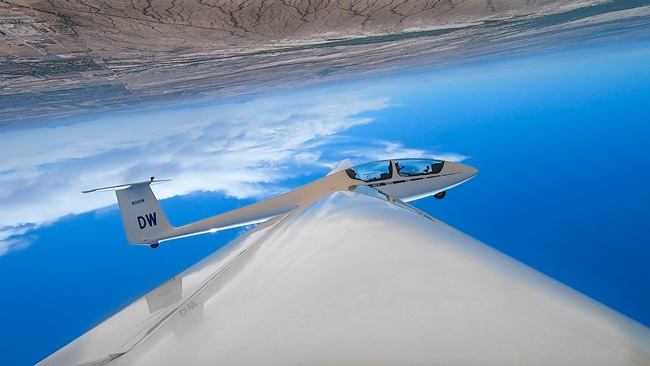