Get the app Get the app
Get the latest news on coronavirus impacts on general aviation, including what AOPA is doing to protect GA, event cancellations, advice for pilots to protect themselves, and more. Read More
Already a member? Please login below for an enhanced experience. Not a member? Join today
News & Videos Accident Analysis: Jet versus Turboprops

Even if the step up to turbine-powered aircraft is most often motivated by performance—speed, range, and payload—the anticipated safety benefits don’t hurt, either. The presumed advantage of turbine-powered aircraft in engine reliability, increased options for weather avoidance thanks to higher service ceilings, sophisticated automation, and onboard weather radar increases the dispatch rate while also expanding the safety buffer. 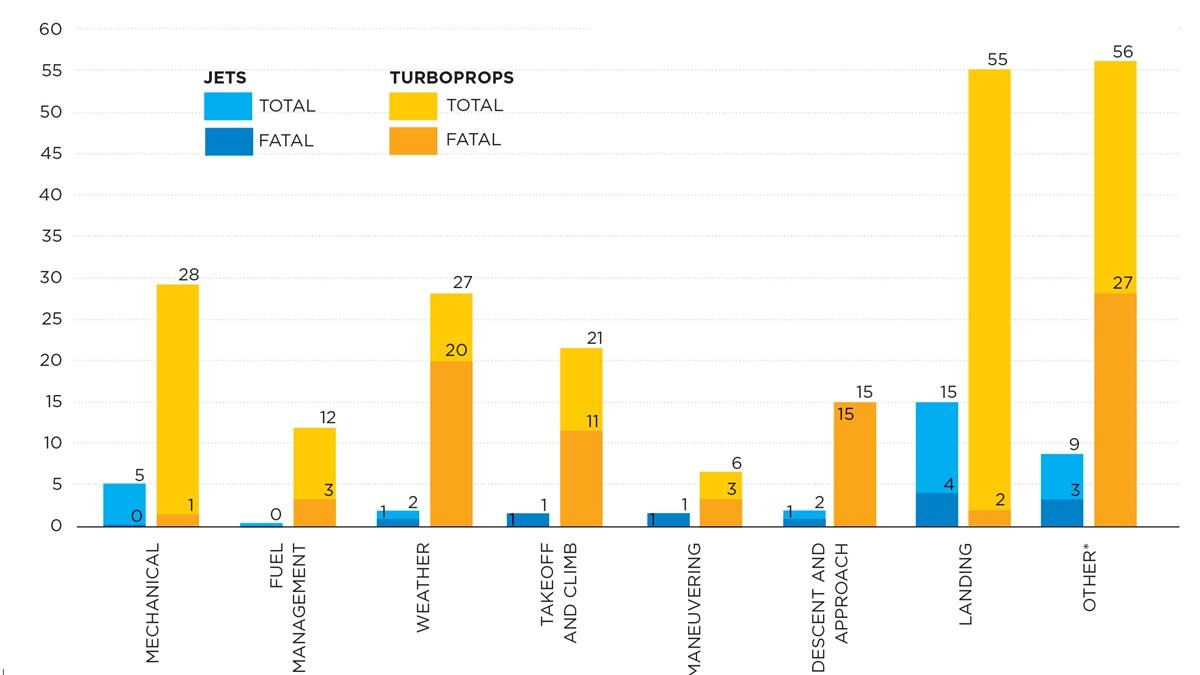 *Includes go-arounds, inadequate preflight, taxi, and miscellaneous causes such as impairment or incapacitation, midair or ground collisions, unexplained upsets in cruise flight, losses of engine power not attributable to fuel mismanagement or documented mechanical failures, and accidents for which no probable cause could be determined.

But of course capabilities aren’t always fully utilized. Does real-world experience live up to the promise? 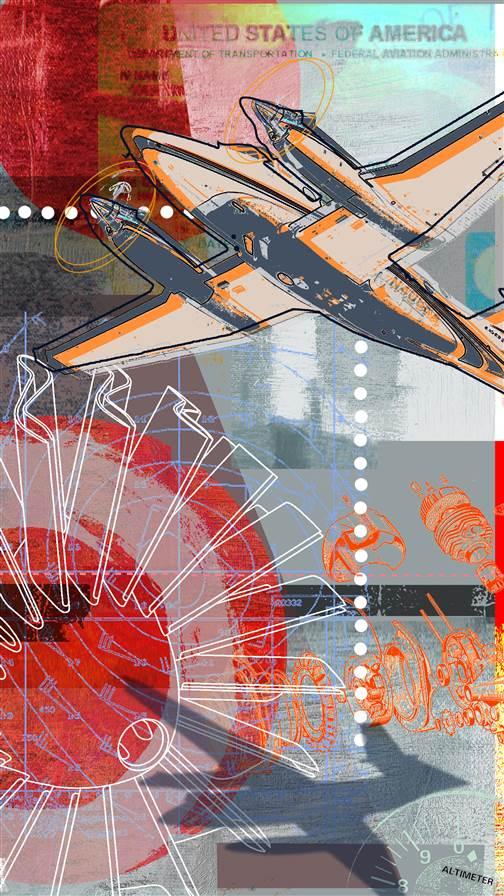 Between 2005 and 2014, there were 35 accidents in type-certificated jets operated under Part 91 by a single pilot. Eleven of them (31 percent) proved fatal. Excluding those on positioning flights by crop-dusting aircraft, certified turboprop airplanes suffered 220 Part 91 single-pilot accidents, with fatalities in 82 (37 percent). These numbers represent 25 percent of Part 91 jet accidents but 79 percent of turboprop accidents during that period. The extent to which that discrepancy reflects differences in patterns of operation can’t be directly ascertained, as there is no reliable source of data on either number of flights or hours flown by crewing level.

In jets, deaths were two and a half times as common in single-pilot accidents as in those involving two-person crews, of which just 12 percent caused fatalities. Single-pilot turboprop accidents, however, carried an excess risk of just 25 percent, as 30 percent of two-pilot accidents were also fatal. The majority of the accident turboprops (125, or 57 percent) were twin-engine models, which showed no survival advantage: Lethality was identical at 37 percent in both singles and twins.

While numerous factors beyond the aircraft themselves—pilot experience, the prevalence of operation under IFR, and the exclusion of Experimental aircraft from this analysis—also contributed, the data suggest that turbine airplanes operate in a more rarefied safety environment. The average accident rates for turboprops during this decade was 1.54 per 100,000 flight hours—one-quarter the overall noncommercial fixed-wing rate—and their fatal accident rate of 0.55 was less than half as high. Jets experienced 0.51 accidents per 100,000 hours with a fatal rate of just 0.09.

Single-pilot jet accidents are rare, most likely because single-pilot jet operation is still relatively uncommon, and their record is too sparse to provide many insights into underlying patterns of risk. However, a few salient points do emerge.

Although 98 percent of all fixed-wing landing accidents are survivable, jets present an exception. More than 40 percent of their single-pilot accidents (15 of 35) happened during landing attempts and four (27 percent) were fatal, accounting for more than one-third of the fatal crashes. Eighty percent of landing accidents were overruns, with about equal numbers caused by excessive airspeed on final and runways that were wet, icy, or otherwise contaminated. Deficient airmanship during landings was the only cause of more than two fatal accidents or five accidents of any kind during the 15 years analyzed.

Four of the seven remaining fatal accidents involved instrument flight. They included an icing-induced stall on final approach precipitated by the pilot’s failure to increase his reference speed for the conditions; spatial disorientation just after takeoff in below-minimums weather; an unexplained loss of control while executing a VOR approach; and a decision to launch into IMC with an inoperative autopilot and attitude instruments in violation of the requirements of the airplane’s single-pilot waiver. The other three included a bird strike, a departure stall on a post-maintenance test flight, and a descent into terrain on the downwind leg of a visual approach at night.

Of the four nonfatal accidents precipitated by in-flight mechanical malfunctions, three were landing gear or brake problems. The fourth was an unexplained shutdown of the autopilot, flight director, and both attitude indicators in IMC; the airframe was overstressed during the recovery. Two each were caused by bird strikes and discrepancies overlooked during preflight.

Landing accidents were both less prominent and less lethal in turboprops, where they made up 25 percent but only two were fatal. Stalls and hard landings (31 percent), inadvertent gear-ups (22 percent), and lateral excursions (also 22 percent) were the most common causes, with another 16 percent attributed to runway conditions. Turboprops suffered just two overruns and three undershoots.

Twenty-eight accidents (13 percent) were attributed to in-flight mechanical problems; nearly two-thirds (18) were landing gear or brake malfunctions. Only six were powerplant failures, although eight more accidents (three fatal) arose from losses of engine power whose causes could not be determined. The only fatal accident from known mechanical causes involved a Pilatus PC–12 whose pilot reported an unspecified instrument failure before losing control in IMC.

With extensive use for long-distance travel but lower service ceilings than jets, turboprops receive greater exposure to weather hazards. Sixteen of the 82 fatal accidents (20 percent) were blamed on deficiencies in the pilots’ instrument-flying technique. Five took place en route and 11 during approaches. There were also fatalities in seven of the 10 aircraft damaged by thunderstorm encounters and six of the eight icing accidents. Add in three caused by turbulence or losses of control near the surface in gusty winds, and weather emerges as the leading cause of fatal single-pilot accidents in turboprops, responsible for some 39 percent (32 of 82).

Airmanship during takeoff and initial climb was another problem area. Eleven of those 21 accidents were fatal, including four of six runway excursions and four out of five departure stalls. Of six fatal accidents ascribed to pilot incapacitation, three were because of medical emergencies, two to hypoxia, and one to the use of a sedating over-the-counter antihistamine. Regrettably, 10 percent of all single-pilot accidents resulted from inadequate preflight inspections (11) or fuel mismanagement (12), with fatalities in three of each.

The safety record is the result of complex interactions between factors including the physical aircraft, pilot qualifications, and patterns of use. More cross-country travel means relatively fewer takeoffs and landings, the scene of numerous nonfatal accidents in piston airplanes. The greater lethality of turbine accidents reflects a lower risk of those less serious mishaps as well as greater exposure to weather hazards and the characteristically greater impact forces associated with their size and speed. (During the same period, only 17 percent of noncommercial accidents in certified piston airplanes were fatal.)

Reliable data on pilot experience is elusive—two-thirds of fatal accident investigations never determine time in type—but turbine pilots are more likely to have earned advanced certifications. Half of all pilots in the jet accidents analyzed and one-third of those in turboprops held ATP certificates compared to just 12 percent of pilots who suffered accidents in piston airplanes. At the opposite end of the spectrum, private and student pilots were responsible for nearly 60 percent of piston accidents, 31 percent of those in turboprops, and 26 percent in jets.

Taken in combination, these factors still fall well short of accounting for the wide disparity in accident rates, so the assumption that turbine equipment offers significant safety advantages appears to be well grounded. Jets and turboprops are not, however, invulnerable, and those who choose to fly them without co-pilots are wise to be mindful of particular areas of concern: landing speeds and runway suitability in jets, and instrument flying and hazardous weather in turboprops. AOPA