Get the app Get the app
News & Media Supersonic dreamers persist

Lockheed Martin, which has been working with NASA to design and develop a quiet supersonic aircraft since 2016, announced a memorandum of understanding with Aerion Corp. Dec. 15 to “explore the feasibility” of jointly developing Aerion’s AS2 design, envisioned as a 12-passenger, Mach 1.4 business jet. The project is among a handful of rival efforts, all still in early stages of development, all hopeful that business executives and airline passengers will be willing to pay a premium for supersonic speed. 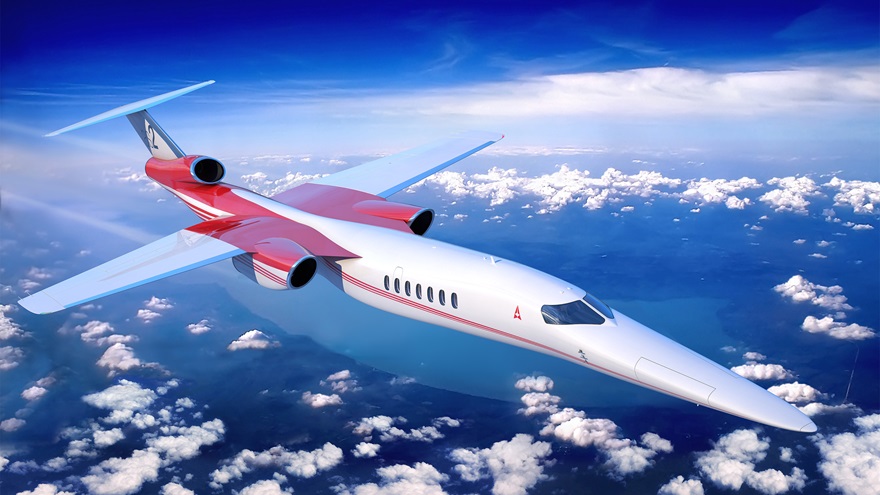 This is Aerion's current design for the Mach 1.2, 12-passenger AS2. Image courtesy of Aerion Corp.

Aerion, based in Reno, Nevada, has been working to realize the dream of supersonic executive transport since billionaire Robert M. Bass formed the company in 2003. In 2014, the company struck a deal with Airbus Group to refine the AS2 design, targeting certification in 2021. On Dec. 15, Aerion and Lockheed Martin officials held a press conference at the National Press Club in Washington, D.C., to announce a memorandum of understanding, a joint agreement to develop the AS2, now with a projected first flight in 2023, and certification in 2025.

Airbus appears to have its hands full these days, mired in a tumult of fraud investigations and reports of potential leadership changes, and having also completed an October deal with Bombardier to build the C Series line of airliners. So, the Aerion-Lockheed agreement represents a kind of corporate-backer crew-change for the AS2 program, which has a few rivals in the race to develop supersonic civilian aircraft.

Lockheed Martin brings decades of experience building supersonic military jets, and recent experience on the civilian side as well, having contracted with NASA in 2016 to design a “low boom” supersonic aircraft. The aeronautics and space agency announced completion of a scale model for wind tunnel testing in February. Mitigating the sonic boom that has led to widespread prohibition of supersonic flight over land is seen by NASA and many others as the key to creating a successful supersonic aircraft. Aerion's AS2 promises relatively quiet passage at speeds up to Mach 1.2.

"Following our initial review of Aerion's aerodynamic technology, our conclusion is that the Aerion AS2 concept warrants the further investment of our time and resources," said Orlando Carvalho, executive vice president of Lockheed Martin Aeronautics, in a Dec. 15 news release. "We are committed to remaining on the cutting edge of aerospace technology and are excited to examine the contribution we might make to working with Aerion on making aviation history."

Aerion is also turning to investors for dollars, announcing the hiring of Goldman Sachs Group Inc. to help the company borrow up to $200 million to finance the preliminary design phase of a project that is expected to cost $4 billion in all. Aerion previously announced a deal with General Electric Co. in May to have GE design an engine for the AS2.

With some of the largest aerospace firms in the world lining up behind the AS2, Aerion was effusive in its optimism.

“This is really the dawn of a new era,” Bass told The Washington Post. Industry analyst Richard Aboulafia of the Teal Group sounded a somewhat more skeptical tone in his own comments to that newspaper, questioning whether Lockheed would ultimately invest the significant sum required to make the AS2 a reality.

Aerion has not been alone in pursuing the dream of supersonic civilian aircraft: Spike Aerospace, a Boston-based firm, quietly flew a subscale, unmanned prototype of what it hopes to scale up into the S-512 at an undisclosed location in October, calling that SX-1.2 demonstrator the “first in a series of demonstrators leading to the full-sized S-512 Supersonic Jet in 2023” in a recent blog post.

Boom Technology Inc., based in Denver, announced a $10 million influx of cash from Japan Airlines in early December, adding more fuel to that development effort, which is also backed by billionaire Richard Branson and The Spaceship Co., the firm Branson created to send civilian tourists into space.

Another effort has continued more quietly, led by Richard H. Lugg, the CEO of two closely related firms, HyperMach Aerospace Industries and SonicBlue Aerospace Inc. Lugg described to AOPA his effort to achieve hypersonic passenger travel in 2013, describing a powerplant built around an electric turbine core. The company website has been pulled offline, and Lugg explained in a Dec. 19 telephone interview that the site was taken down “because we moved into stealth mode” to focus on finishing the design and engineering of what will be a radically different powerplant, though one, he said, that is based on proven technologies.

Lugg said his twin companies have formed partnerships with big-name aerospace firms that will be disclosed in time, and all operations have now been consolidated in the United States. He said he also has had discussions with three operators, including one airline and two corporate charter firms.

The present focus is on the hot section of the engine, and he expects to have an operating prototype of the powerplant in 2019. As for the airframe, “We have a subscale flight vehicle that’s in design and engineering now,” Lugg said. “We’re pretty excited about that vehicle.”

While the other supersonic contenders aim for speeds slower than the Mach 2 Concorde, which retired from service in 2003 having proved economically nonviable, Lugg’s twin companies are still aiming to surpass Mach 5, with a first flight of the full-scale prototype planned for 2025, followed by certification in 2028. Lugg said the hybrid power technology his firms are developing will be more fuel-efficient than turbofan and turbojet engines, and allow the aircraft to be lighter and quieter as well. The current aircraft design has evolved into a 36-passenger, twin-engine design able to cruise at Mach 5.5 with a range of 9,600 miles, Lugg said.

Lugg said the companies working to create a new generation of supersonic passenger aircraft are part of a close-knit community, and while rivals, the various efforts also complement each other by contributing to the realization of a long-sought goal.

“Everyone kind of knows everyone. I think it’s a good thing,” Lugg said. “Overall growth in the industry … that’s really what it’s about.”