Get the app Get the app
Already a member? Please login below for an enhanced experience. Not a member? Join today
News & Media CAP technology team scores second save in month

Technology deployed by the Civil Air Patrol (CAP) helped rescuers pluck stranded pilots from severe winter weather for the second time in a month. A combined analysis by the CAP’s National Radar Analysis Team (NRAT) and its Cell Phone Forensics Team helped pinpoint both downed aircraft, which led to quick recovery efforts that likely saved the lives of the pilots and passengers in the face of harsh conditions. 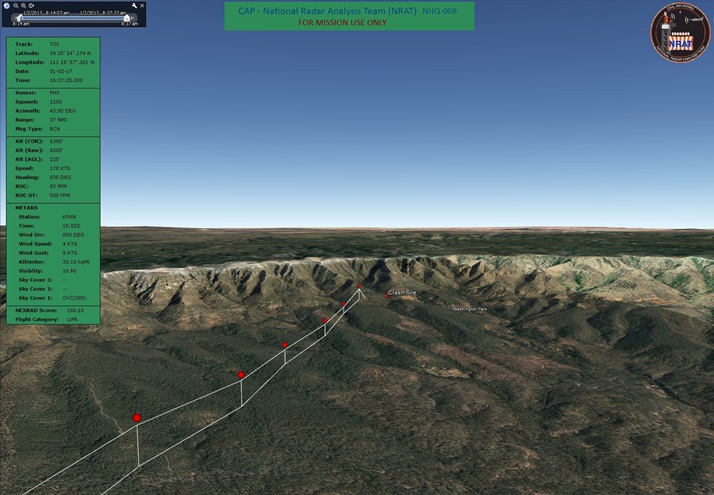 Lt. Col. John Henderson, a retired U.S. Air Force radar analyst in Tacoma, Washington, who heads the CAP’s radar team, helped locate a Cessna 180 with three aboard after it went down in south central Alaska Jan. 30. They were rescued by a U.S. Coast Guard helicopter flying along a path plotted by the radar analysis team. “They had to fly very low and slow because weather was moving in,” Henderson said, “and it was just about sundown.” With temperatures dropping to near 20 degrees Fahrenheit, he predicted “they would not have been located” that night without the data.

Radar information with input from cell phone data and aviation-specific factors including weather, terrain, and intricate mapping were combined into a unique system that Henderson developed to swiftly mobilize such rescues. A similar analysis Jan. 8 led rescuers to Colorado’s rugged Flat Tops Wilderness Area where a couple was stranded near their Cirrus in two-to-four-foot-tall snow drifts.

“It’s not just where the last radar hit was received, it’s a matter of what happens after that last hit,” Henderson told AOPA. “Did he [the pilot] do anything suspicious, did he turn off the transponder, have electronic failure, or did it look like he was getting ready to encounter mountains?”

It’s all about time and finding people as quickly as possible, echoed Kentucky CAP volunteer Lt. Bill Rason. “Back in the day, you had a huge haystack and the technology now allows the teams to quickly compile a massive amount of information, along with detailed maps, to make that a bale of hay.” Rason said that as data gathering becomes more sophisticated, the probability of detection also increases. Simply put, as searchers zero in on a likely site, “the searching gets smaller and smaller, and your probability gets higher and higher,” which in turn speeds up the rescue process. 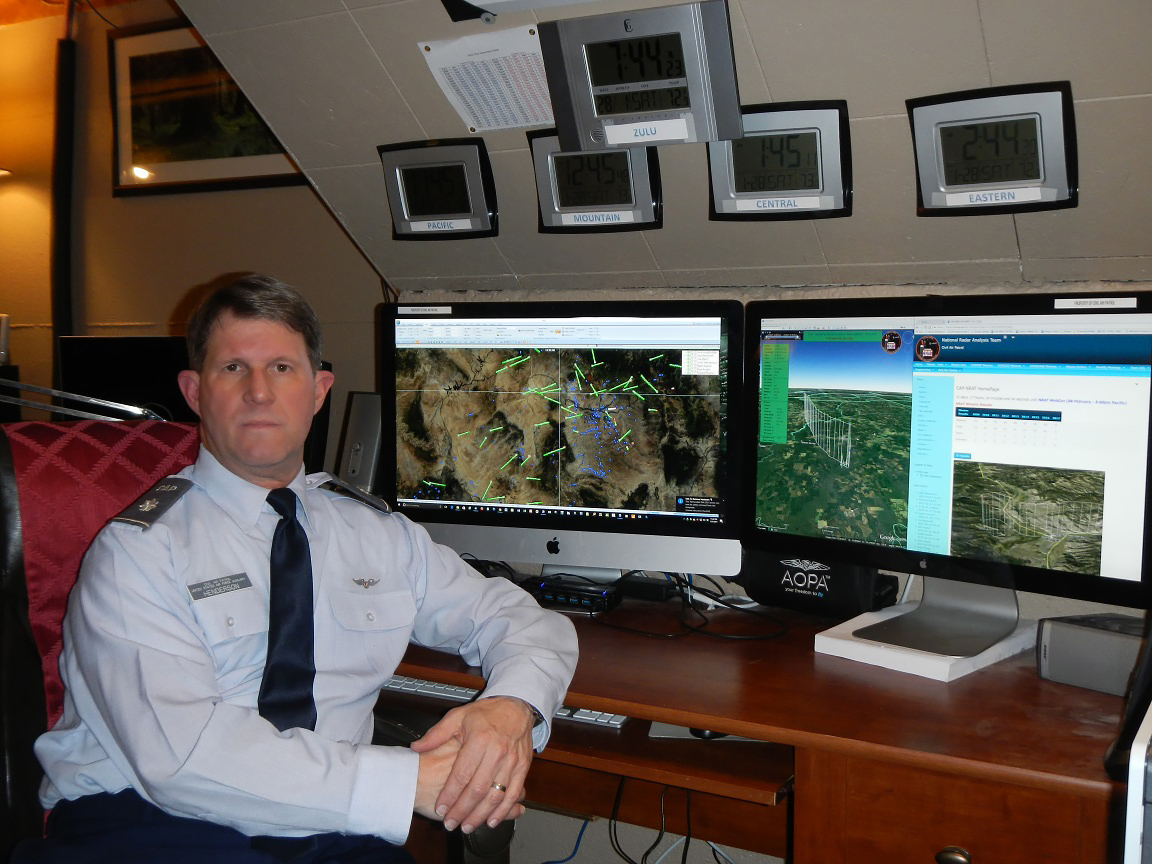 Henderson’s handful of all-volunteer radar experts considers the plethora of factors to hone in on a likely search site for a rescue and an extraction before alerting other authorities to mobilize. Depending on the data, “It can be very, very quick once we’re alerted—or it can take many, many hours to sort through” all of the scenarios. CAP’s cellular tracking specialists work hand in hand with the radar team as each group validates the other’s data.

“Time is always of the essence,” said Henderson. “If people survive they might not last four or five hours” in extreme conditions, so the key to success is “to get to them as soon as possible.” Henderson’s team helps narrow the proverbial needle in the haystack to a more manageable search area.

He explained that a VFR pilot squawking 1200 on his or her transponder might not immediately stand out among thousands of others, but it would be “a good place to start” a search, should the pilot go missing or become overdue.

From his base of operations near McChord Air Force Base in Washington, Henderson directs a team of 11 NRAT specialists fanned out toward the country’s heartland. Radar team members record raw radar data, called native hits, which he explained are unprocessed radar returns.

There are three types of radar returns, said Henderson. “If it’s an object not squawking, then it’s a blue dot” and considered a primary target by radar specialists. For example, when the hijackers in the 9/11 terror attacks turned off their transponders they became primary targets.

The next type of target is called a reinforced radar message and shows up as a green dot. “That’s where you get a skin paint-back and a transponder code but you really don’t know who it is.” The high-density aviation area in Southern California can depict a mass of green dots indicating “50 aircraft or more.” During a rescue-tracking operation he said the specialists “have to weed out all those tracks, and it’s a process of elimination.”

The third type of returns are beacon-only replies that show up as red dots if “you didn’t get a skin-paint reflection of the aircraft, but at least you know someone is out there.”

Armed with that basic information the NRAT group begins adding in calculations for weather fronts, aircraft data, terrain, and variables that might lead the known course in a different direction. “I try to put myself in the pilot’s seat,” said Henderson, who learned to fly in a Citabria and has “a ton of hours in a Cessna 140.” He considers the circumstances the pilot faced and looks at variables “like winds coming in over ridges or if icing conditions existed,” for example.

Meanwhile an online chat is opened with additional search-and-rescue specialists including the cellular team, U.S. Air Force air traffic controllers, field rescuers, and others. Real-time information is pooled, and theories are discussed and then either followed or dismissed, based on additional input. “Sometimes new information points the process in another direction.”

Modern technology includes “some fantastic programmers that can build this stuff nobody else can do” and counts for much of the team’s success, Henderson said. Other elements including radar accuracy—or gaps in its coverage—factor into the team’s analysis. “At 30,000 feet you have lots of coverage,” he added, “but down low you don’t have 100 percent” radar reporting.

Henderson’s team designed software that he called a “speed ring” that is applied to a radar track, “and as we animate the data, you can see if something pops up further out and how likely it is to be the same aircraft.” They also animate weather observations and incorporate them into the computer modeling to statistically narrow the search area.

“Thousands of programming hours,” which he pointed out was an all-volunteer effort, were required to build the sophisticated computer modeling and have accounted for the 700 to 800 search missions since NRAT formed in 2009.

The tight-knit group includes computer programmer Argon Helm, animated GIF specialist Alanna Wedum, veteran radar analyst Capt. Guy Loughridge, and others who brainstorm new ways to speed the search-and-rescue process. Six radar analysts are on call during a weekly rotation with shifts that tend to get busier as the sun goes down. The team also assists nonpilots such as missing hikers, skiers, and outdoor adventurers in need of help or medical attention.

Henderson said a new artificial intelligence computer modeling technique he dubbed ICARUS is now in development, “and it’s going to be a definite game changer” because it feeds incoming data into a scoring matrix. The modeling system will show “a constant flow of radar data” and then make tracks out of it. He said ICARUS will be programmed to look at every radar track and then analyze when and why it stopped.

“Did the pilot land at an airport or were they tracking toward rising terrain? Was it daytime, night time, or was weather a factor? It scores all of this data” and determines a probability factor that could warrant a closer look by rescuers. “So 15 minutes after the crash we would possibly know about it,” said Henderson. “It could cut days from the search and possibly save a bunch of lives.”

He said ICARUS should be working by the end of 2017.

“This flips the paradigm,” added Henderson. “When this system goes online we’ll be calling and letting people know there’s a crashed aircraft instead of the other way around. Nobody’s ever done this before, we’re breaking new ground.”