AOPA is planning to meet with the FAA later in February to advocate a remedy for the economic toll temporary flight restrictions (TFRs) take on the general aviation sector when President Donald Trump visits his Mar-a-Lago estate in Palm Beach, Florida. 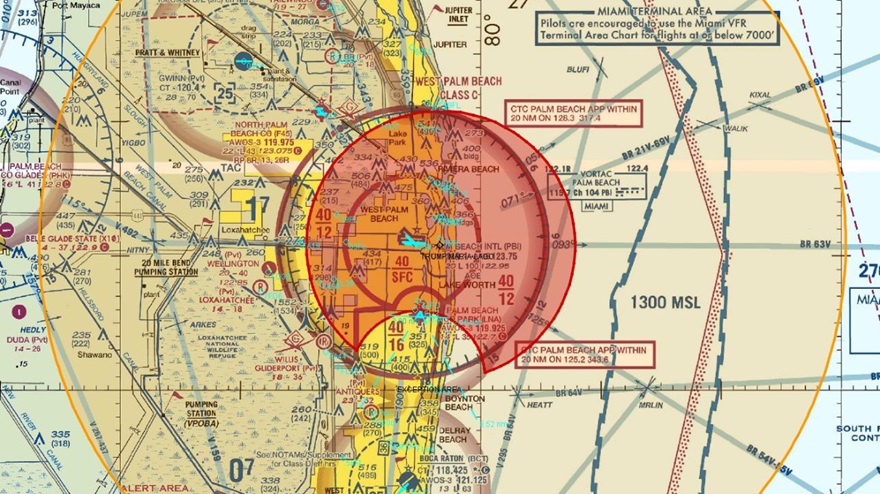 Depiction of TFR inner and outer ring with proposed cutout for Lantana Airport.

News reports have reflected concern that Palm Beach County Airport stands to sustain heavy losses, and may already have done so from the TFR that was in effect for Trump’s first visit to Mar-a-Lago as president.

Under existing security requirements set forth by the U.S. Secret Service, no operations are allowed at the airport, which is also referred to as Lantana Airport, except for aircraft arriving after being cleared in from a gateway airport during a TFR’s effective period, said Nobuyo Sakata, AOPA director of aviation security.

Losses to shut-down local GA businesses could become more severe if Trump were to stay at Mar-a-Lago for an extended period such as the upcoming holiday weekend, she added.

AOPA is seeking the meeting with the FAA to discuss an association proposal to modify TFRs for Mar-a-Lago visits by implementing a special arrival and departure procedure and “by creating a cutout to exclude Lantana Airport from the 10-nautical-mile inner ring” that is standard for the TFRs.

“We understand the security concerns about the airport’s close proximity to the President’s residence. However, by using certain runways, we strongly believe that both departure and arrival traffic at Lantana Airport can be directed away from the center of the TFR and any flow of traffic directed at Mar-A-Lago can be eliminated,” she said.

The planned meeting follows up on two recent letters by which AOPA communicated concerns about the impact standard presidential TFRs have on six airports that, as AOPA wrote to Trump’s transition team in December 2016, “have a total economic output exceeding $1 billion, create over 8,000 jobs, and have a total payroll of $290 million.”

In a Jan. 13 letter to the FAA’s director of system operations security, AOPA proposed creating an airspace cutout that would exclude Lantana Airport from the restrictive inner ring of a TFR. The airport employs “250 people full-time, has a direct economic impact of almost $15 million, and accounts for a total community impact of over $27 million annually. In addition to the airport’s fixed base operator, there are approximately 25 aviation businesses located on the airport property, including a pilot shop and aircraft maintenance facility,” Sakata wrote.

AOPA “contends the safety and security requirements of the FAA and the United States Secret Service (USSS) can be accomplished; while providing relief to the hundreds of pilots who utilize this airport daily, by creating a Lantana Airport special arrival and departure procedure that would be part of the TFR Notice to Airmen,” Sakata added, suggesting that the procedures be modeled on the Washington, D.C., Special Flight Rules Area.

“By using certain runways at Lantana Airport, such as departing from Runway 15 or 21 and arriving on Runway 9 or 27, both departure and arrival traffic at Lantana Airport can be directed away from the center of the TFR and any flow of traffic directed at Mar-A-Lago can be eliminated,” the letter added. Appended to the letter was AOPA’s proposed TFR notam modification that consists of a depiction of a cutout for Palm Beach County Airport, and a special arrival and departure procedure for the airport.

Sakata cited news reports noting that Trump’s first weekend visit cost Lantana Airport approximately $30,000.  “The losses could be over $40,000 for Presidents Day weekend if the President returns and stays for the extended weekend,” she said.

Sakata added that the vetting of FAA-certificated pilots and foreign student pilots—who go through an extensive vetting process required by the TSA’s Alien Flight Student Program—provides an additional layer of security.

No date has yet been set for the meeting AOPA has requested with the FAA.

Dan Namowitz has been writing for AOPA in a variety of capacities since 1991. He has been a flight instructor since 1990 and is a 35-year AOPA member.
Go to Dan Namowitz's Profile
Topics: Security, Airspace, Notams