Get the app Get the app
Get the latest news on coronavirus impacts on general aviation, including what AOPA is doing to protect GA, event cancellations, advice for pilots to protect themselves, and more. Read More
Already a member? Please login below for an enhanced experience. Not a member? Join today
News & Media Garmin launches new generation of G1000 cockpit

A new generation of the popular Garmin G1000 integrated flight deck looks much like the current edition. But looks can be deceiving. The new G1000 NXi has plenty new going on behind the button-festooned face we’ve come to know over the past dozen years. 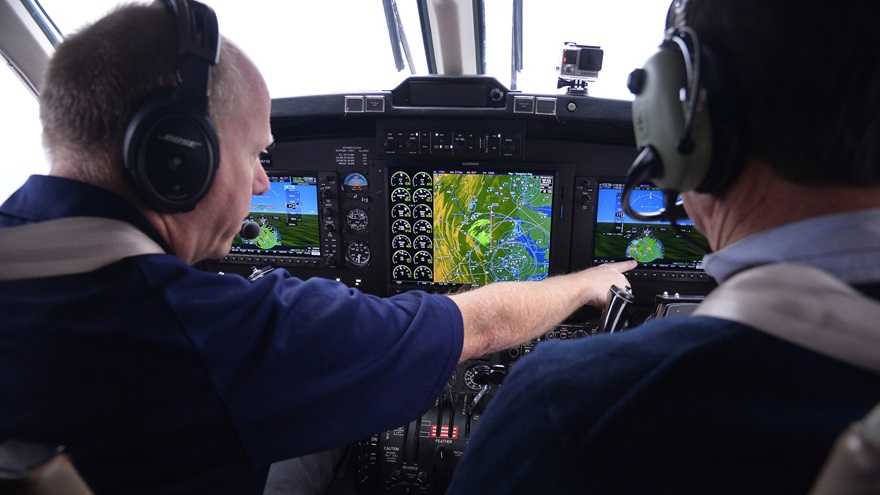 Garmin Sale Manager Scott Frye points out the new HSI inset map on the copilot’s side of the G1000 NXi, the new generation of integrated flight deck from Garmin. Garmin has received an STC to install the system in King Air 200, 300, and 350 series turboprops. Photo by David Tulis.

If you are the type who judges a book by its cover, you might look at the new Garmin G1000 NXi and go, “So what?” Indeed, the new generation of the popular integrated flight deck looks much like the current edition, of which some 16,000 have been installed.

Garmin calls the NXi a “successor” to the G1000, which was introduced in 2004 and since has become nearly ubiquitous in new aircraft from light singles up through light jets. Additional variants, the G2000, G3000, and G5000, with different displays, including touch controllers, are used in a variety of airplanes from the Cessna TTX high-performance piston single up through the world’s fastest civilian airplane, the Cessna Citation X+ business jet.

The G1000 NXi looks like its predecessor G1000 on purpose, according to Garmin, to simplify pilot transitions to the new system and to simplify manufacturers’ ability to install it in new airplanes and for retrofits. Upgrading the aftermarket G1000 in your King Air, for example, will take only about a day, Garmin officials report. The displays will be swapped, including new processors, but the connectors are the same; the attitude-heading reference system and air data computer (ADC) will remain. 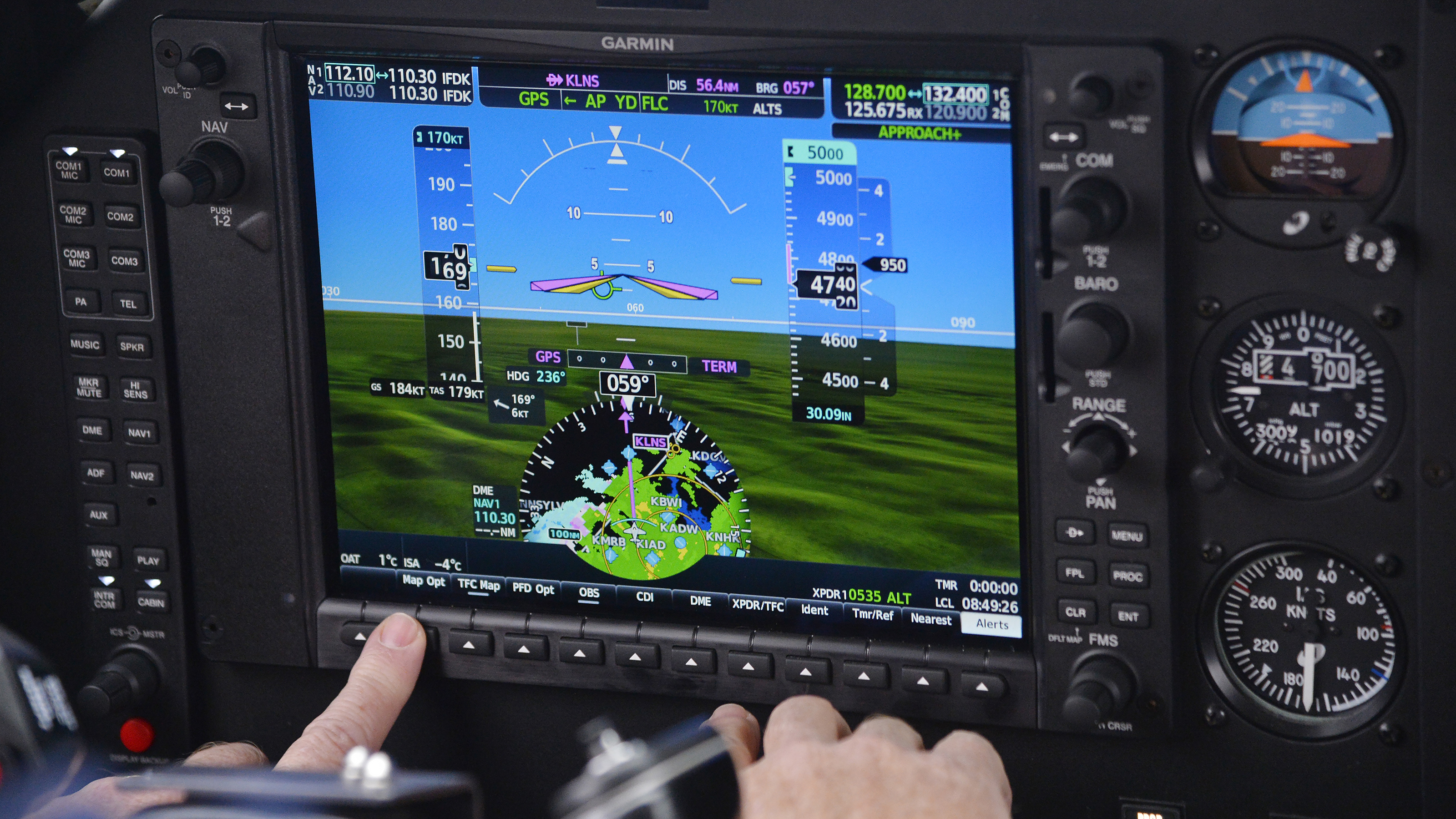 Installations into new airplanes at the factory or new aftermarket installs will receive a new generation of AHRS that combines the ADC, reducing weight and complexity. Garmin estimates a new retrofit installation in a King Air with conventional instruments will reduce weight by as much as 250 pounds.

According to Jessica Koss, Garmin director of media relations for aviation, the current generation of G1000 processors were maxed out, given the 15 major software upgrades the company has provided since the original installations. Each upgrade brought new features and capabilities. In order to continue to be able to offer upgrades and features, new processors were needed, thus the G1000 NXi.

The new displays include new processors and LED backlighting, which improves brightness and allows for better dimming at night. The multifunction display offers more resolution. Garmin puts the new capability to work right out of the box with a host of new features not available on the G1000. Most noticeable is the HSI inset map, which provides an arc shaped map inside the HSI compass rose. The map is configurable for any number of overlays, including terrain/obstacles, Nexrad, airborne radar, or traffic. Other new features include Garmin SurfaceWatch, which issues visual and aural alerts as you approach a taxiway or runway while taxiing. You can enter a runway for takeoff and landing. On takeoff, a blue runway outline and blue chevrons on the synthetic vision confirm you’re on the right strip of pavement. Similarly, on landing a blue outline confirms you’re landing where you were planning to. The system knows runway lengths and will alert you if a strip is too short for landing. A new vertical situation display shows across the bottom of the MFD depicting terrain that may affect your altitude.

The latest database upgrades include scanned sectional and IFR charts. Finally, visual approaches are available out of the database for nearly every runway end. The visual approach provides a straight-in approach to the runway with a three-degree glide path that can be coupled to the autopilot, providing the pilot with lateral and visual guidance even when a normal instrument approach is not available. On visual approaches, the pilot must confirm his own terrain and obstacle clearance. But especially at night and at an unfamiliar airport, the guidance can greatly reduce pilot workload and improve situational awareness. 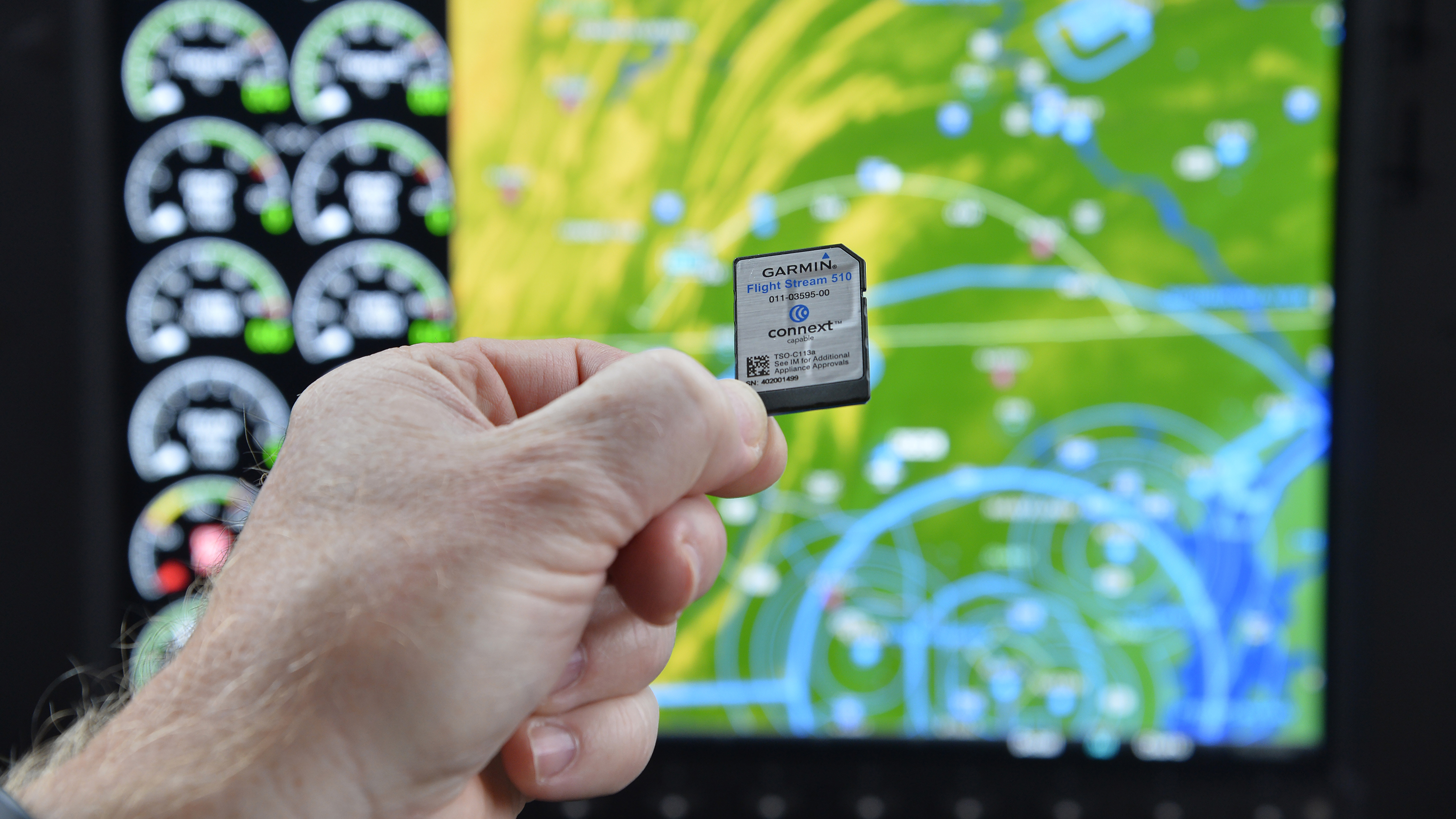 While the new features are welcome, there are many subtle enhancements throughout the system. The displays light up within just a few seconds of receiving power, much faster than traditional G1000 displays. A com radio also is available almost immediately so the pilot can receive ATIS and clearance while the system initializes. Green LEDs above each soft key help the pilot understand which features are active at any one time, much clearer than the gray tabs on the original G1000. Like SurfaceWatch, Garmin Flight Stream 510 is an option, but one that will likely be nearly standard. The 510 replaces a conventional SD data update card with a Wi-Fi card, allowing the pilot to transfer navigation database updates wirelessly from the Garmin Pilot flight planning app. The 510 will then distribute the data to all the displays. It also sends weather and traffic information back to the tablet-computer app and allows for two-way transfer of flight plans between the app and the panel.

Other enhancements include enlarged and more readable fonts; animations to show changes occurring—such as with radio frequency flip/flops; frequency identification to show what stations are tuned; and much faster panning and zooming of the maps; and animated Sirius XM Nexrad images.

We had the chance to fly the G1000 NXi on a King Air 350. The flight included a demonstration of a coupled missed approach. While the ability to command a missed approach without disconnecting the autopilot is not new to the G1000, it is a recent software update and will be new to many who fly with the NXi. As we neared minimums to Runway 13 at Lancaster, Pennsylvania, Garmin demonstration pilot Scott Frye tapped the go-around button on the power levers. The flight director commanded an initial pitch up to 10 degrees and started the airplane upward. It was up to Frye to add power and retract the gear and flaps. A touch of the nav button had us headed out for the missed approach procedure. Had he not added power—or enough power, the Electronic Stability and Protection (ESP) system in the autopilot would have pitched the airplane over enough to keep it from stalling.

Conventionally, hitting the go-around button would disconnect the autopilot and the pilot would be on his own to establish the climb at the appropriate attitude. Particularly in a single-pilot situation, the coupled approach is a significant safety enhancement.

The current Garmin King Air STC allows for installation of the NXi in the 200, 300, and 350 series. They will be evaluating additional models in the coming months. A price for the upgrade has not yet been set.

Garmin expects aircraft manufacturers to announce their own plans for installing the new systems in new aircraft and potential retrofit for more models in the next few days and weeks.

Editor in Chief
AOPA Editor in Chief Tom Haines joined AOPA in 1988. He owns and flies a Beechcraft A36 Bonanza. Since soloing at 16 and earning a private pilot certificate at 17, he has flown more than 100 models of general aviation airplanes.
Go to Thomas B Haines's Profile
Topics: Turbine Aircraft, Avionics, Technology