Get the app Get the app
AOPA Members DO more LEARN more SAVE more - Get MORE out of being a pilot - CLICK HERE
News & Media Weather: Going through a phase

Weather: Going through a phase

How water's changes affect your next flight

Water is so common that most of us rarely think about how important it is. Nevertheless, when you obtain a preflight weather briefing, really you are trying to find out what water—in the form of vapor, “liquid water” (everyone except atmospheric scientists calls it “water”), and ice—in the atmosphere will be doing along your proposed flight route. 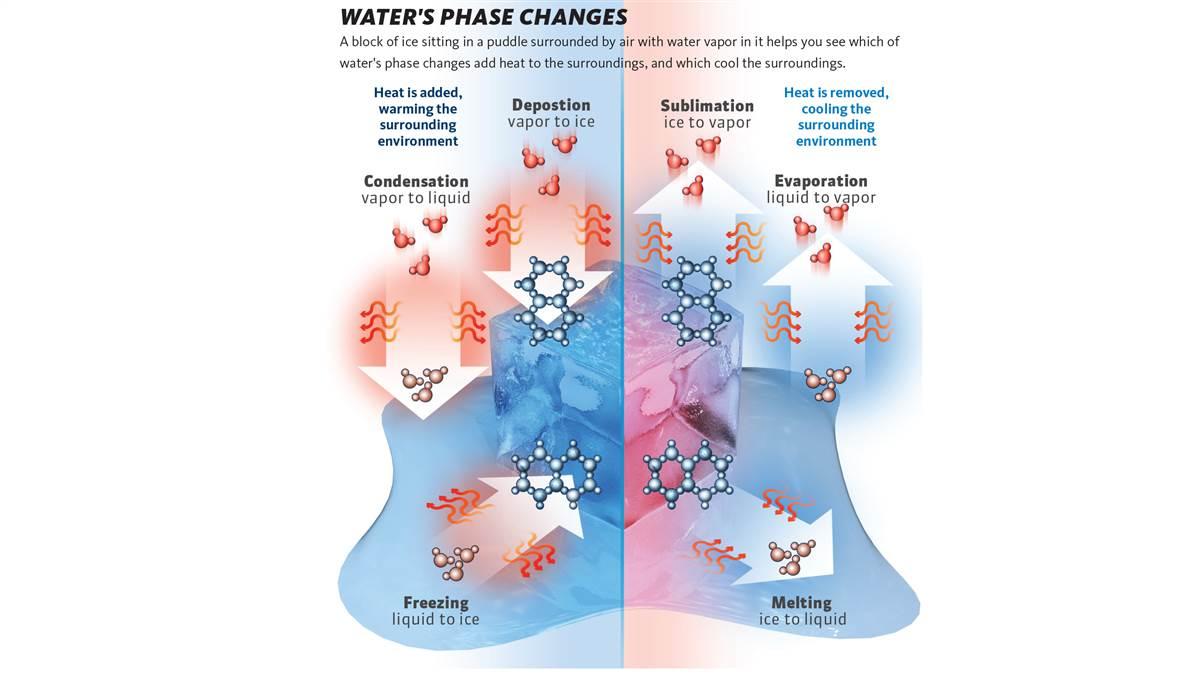 Charles Floyd; The AMS Weather Book, re-created with permission of the American Meteorological Society
Even the air over Earth’s driest deserts contains at least a tiny amount of water vapor.

In fact, water’s importance to your flight goes far beyond the fog, clouds, or rain you might encounter. In addition to being the stuff of which rain, snow, and clouds are made, water supplies an important share of the energy that powers thunderstorms and hurricanes.

What makes water so special? Water is at the heart of almost every kind of weather because it’s the only natural substance that exists as a liquid, a solid, and a gas at the temperatures found on the Earth’s surface. Its changes among these phases is an important driver of weather.

Imagine sitting in a 70-degree-Fahrenheit room sipping an iced drink as you plan a flight. The drink is mostly water in its liquid form. The ice in the drink is water’s solid form. The air you’re breathing contains the gaseous form of water, known as water vapor.

A substance’s molecular nature and the speed at which its molecules are moving determine the combinations of temperature and pressure that make it a liquid, a solid, or a gas. Water’s molecular nature accounts for its existence in all three phases at reasonable temperatures. Why this happens takes you deep into physics and chemistry—but you don’t need a college degree in one of these sciences to understand the basics of what’s going on. The important point is that water’s structure determines what molecular speeds—and thus what temperatures—are needed for it to change among its solid, liquid, and gas phases.

How water acts in different phases.

To begin seeing how water affects the weather, we’ll look at what happens as it changes phases, beginning with the change from solid to liquid. At ordinary air pressures, ice begins melting when the temperature rises to 32 degrees F. Above 32 degrees, molecules are moving too fast to stay locked into ice crystals—but slowly enough for molecular attraction to hold them together as a liquid. As the ice melts, some of the liquid’s molecules will be moving faster than average—fast enough to break away and fly into the air as water vapor. They evaporate. In other words, liquid water does not have to be brought to its sea-level boiling point of 212 degrees F for some of it to change into water vapor.

Water vapor illustrates that much more than temperature is involved in determining water’s phase. Temperature, however, is a key to how much water vapor can be found in the air. To see how this works, let’s imagine we can see water vapor in the air above a container of water. To keep it simple, we’ll also assume that the container is closed so the air won’t mix with the outside air. If we could see water molecules, we’d see that those in the air, as vapor, are moving at a wide range of speeds. The same is true of the water molecules making up the liquid in the container; they are moving at a range of speeds. However, the average speed of the vapor molecules is higher than the average speed of the liquid molecules.

We would also see that some of the molecules in the liquid are going fast enough to escape, flying into the air as water vapor. At the same time, some of the vapor molecules are going slowly enough to become liquid in the container. If the temperatures of the water and the air above it have been constant for a while, we’d see that the numbers of molecules leaving and entering the water are roughly equal. 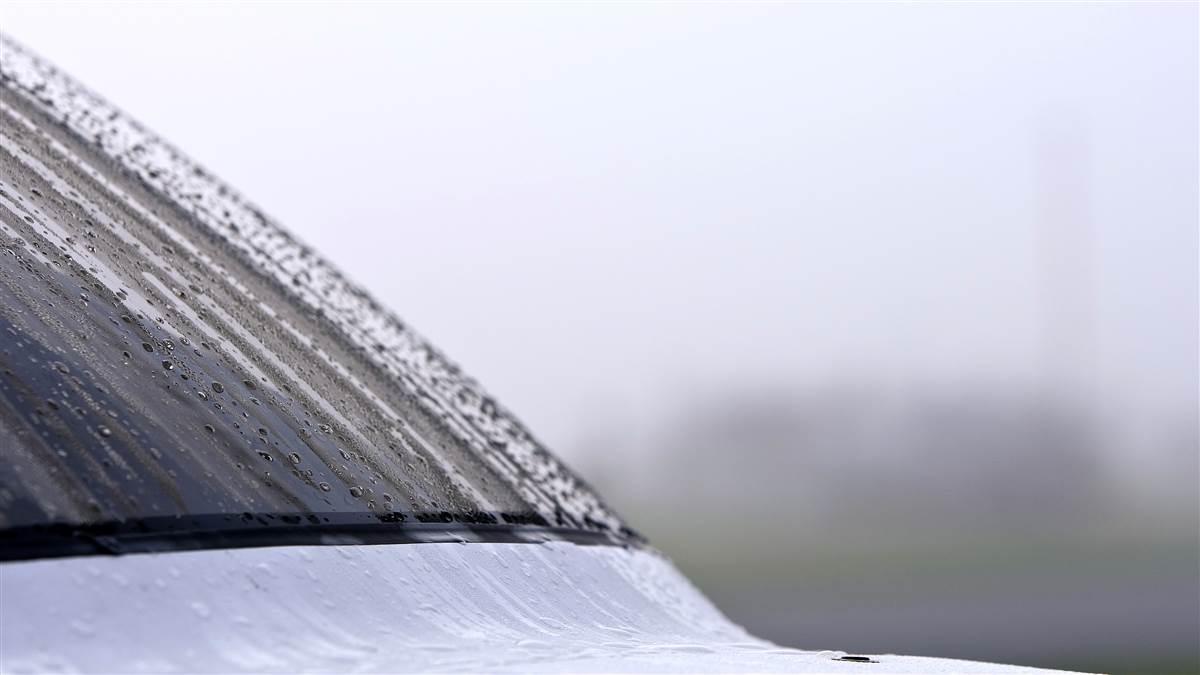 If we cooled the air and water, some vapor molecules would become liquid, and the air would become saturated with fewer vapor molecules at a lower temperature. In other words, the amount of water vapor needed to saturate the air depends on the air’s temperature. When the air cools enough to reach the saturated mixing ratio, the water vapor—the humidity—in the air will begin condensing.

When the temperature of water drops below 32 degrees F, its molecules can begin coming together to form six-sided ice crystals, but water needs a template to form ice. If the water is in a large enough container, such as a section of an ice tray in a freezer, water molecules that happen to come together as an ice crystal will supply the template and ice rapidly fills the container.

The story is different when the water is in tiny cloud drops, or even raindrops, that cool below 32 degrees F. Odds of an ice crystal forming in such tiny drops are low until the drop grows much colder. Drops that are still liquid while below 32 degrees F are called supercooled. They can instantly turn into ice when they hit something, such as the wing of an airplane. What happens in clouds as water droplets and ice crystals form is so complex that it’s the topic of its own science, called cloud physics. For example, particles known as freezing nuclei help cloud drops turn into ice. Other kinds of particles, called deposition nuclei, encourage the formation of ice crystals directly from water vapor. Ice also can turn directly into water vapor without first becoming liquid.

These are the phase changes that water goes through in the atmosphere:

• Melting of ice into liquid

• Evaporation of liquid into vapor

• Sublimation of ice directly into vapor

• Condensation of vapor into liquid

• Freezing of liquid into ice

• Deposition of vapor directly into ice.

Although the temperature isn’t the whole story of phase change, it is important, and each phase change involves either taking up or giving off heat. For example, to evaporate into vapor, liquid water must gain heat, which means evaporation carries heat away from the liquid. The most familiar example of this is the perspiration that carries heat away from our bodies, cooling us. To condense back into liquid, water vapor must lose heat.

The heat that phase changes add or take from the surroundings is called latent heat, which means it is heat that thermometers can’t measure. The illustration (previous page) shows that condensation, freezing, and deposition all add heat to the surroundings. These processes begin when air rises and cools enough for condensation, freezing, or deposition to begin. The added heat slows cooling of the rising air, causing it to rise faster and farther. Such added energy is the main source of energy for showers, thunderstorms, and hurricanes.

Evaporation, melting, and sublimation all cool their surroundings, and this also is a source of added atmospheric energy. Thunderstorm downdrafts, especially the strong downdrafts known as microbursts, occur when heat added to water or water vapor cools the surrounding air. Such cooling makes the air denser, causing it to accelerate toward the surface.