Get the app Get the app
AOPA will be closing at 2:30 pm ET on Friday, May 27, 2022, in observance of Memorial Day. We will reopen at 8:30 am ET on Tueday, May 31, 2022.
Already a member? Please login below for an enhanced experience. Not a member? Join today
News & Media Pitch Trim Runaway

Right after takeoff, it’s a recipe for disaster

A flight-control anomaly shortly after takeoff ranks among the most hazardous emergency situations. With little time or altitude to troubleshoot the problem, detailed understanding of the systems involved and close coordination among the crew are essential to maintaining positive aircraft control. Pitch attitude is especially crucial: Airspeed and aerodynamic loads build rapidly if the nose is allowed to drop, while letting it rise risks an unrecoverable stall. 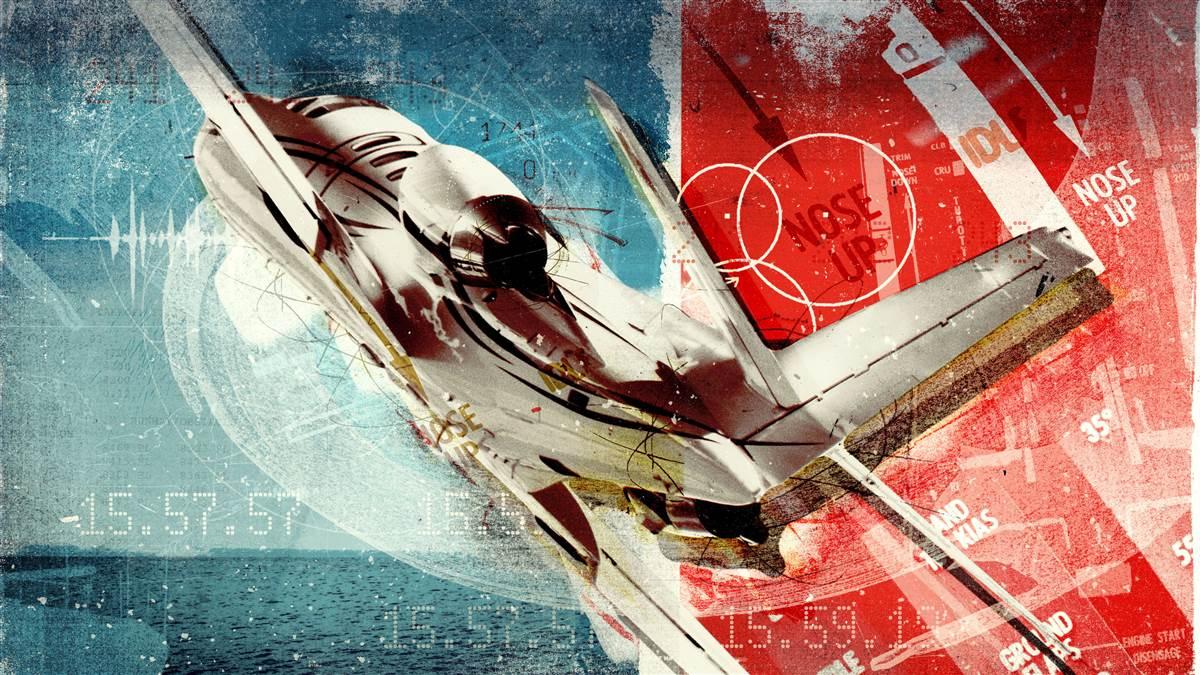 The case files of the National Transportation Safety Board (NTSB) include accounts of flight crews who have confronted that challenge. Some have handled it calmly and professionally. Unfortunately, those who weren’t as well prepared often were overwhelmed.

An example of the former occurred in Tampa, Florida, in October 2014. At 400 feet agl and V2 +10, the co-pilot (and pilot flying) of a Cessna Citation SII advised the captain that the controls were “stiff.” Neither electric nor manual trim could balance the pitch forces, and pulling the circuit breaker didn’t help; the first officer’s “arms were fully extended pushing the control yoke.” The captain declared an emergency. Gradual modulation of airspeed and incremental configuration changes reduced the control pressures and allowed them to fly a normal visual pattern and land. The subsequent investigation found a jammed number two sprocket assembly inside the left elevator trim actuator.

Not so good, not so lucky

The 2007 crash of N550BP, a Cessna Citation II on departure from Milwaukee, Wisconsin, illustrates the opposite extreme. It was a Part 135 charter flight operating under contract to the University of Michigan Medical Center, and had arrived shortly before noon carrying a four-person surgical team. Their task was to harvest donated organs for a patient awaiting a double lung transplant. After receiving word from the procurement team, surgeons at the university began preparing the recipient for surgery.

Regardless of the cause, it was the crew’s response to the abnormality that doomed the flight. The NTSB cited the crew’s “haphazard and poorly coordinated troubleshooting efforts” as having “allowed an abnormal situation to escalate to an emergency.”The Citation took off just before 4 p.m. on June 4, and things began to go wrong almost immediately. Six seconds after takeoff, the cockpit voice recorder (CVR) captured the captain’s voice stating, “Positive rate, yaw damper on”—but 11 seconds after that, as the first officer confirmed that they were turning to their assigned heading, it recorded the captain asking, “Why am I fighting the controls here?” Six seconds later, at 3:57:57 p.m. local time, he repeated, “I’m fighting the controls.” He had the first officer confirm that the gear was up and told him to retract the flaps. Ten seconds after that, the captain said, “What the [expletive]’s going on? I’m fighting the controls.” The first officer responded, “How’s your trim set? Is that the way you want it?”

The airplane continued to accelerate for another eight seconds before the captain said, “I’m fighting the controls. It wants to turn hard left.” The first officer again asked about the trim and was told, “Trim has nothing….” During the next minute, the captain continued to wrestle with the controls; at 3:59:19 p.m., the CVR recorded him saying, “She’s rolling on me. Help me, help me.” He told the first officer to pull the autopilot’s circuit breaker. The first officer replied, “Where is it?” By this time, airspeed had surpassed 245 knots.

At 3:59:44 p.m., the first officer declared an emergency caused by “a runaway trim,” and the captain added, “Landing any runway at … Milwaukee. Guide us in, please.” As they got the airport in sight, he told the first officer, “You hold it, I’m gonna try to pull circuit breakers.” Four seconds later, the captain said, “We’re not…holding it…” and the first officer stated, “I’m pulling.” Barely three minutes after takeoff, the jet slammed into Lake Michigan. The NTSB’s reconstruction concluded that it hit the water in a 42-degree nose-down attitude, left wing low, going 243 knots.

The captain was a 59-year-old airline transport pilot type-rated in the Cessna 500, Citation II, Citation 650, and the McDonnell Douglas DC–9. Shortly after hiring him as a line pilot in February 2005, the operator promoted him to chief pilot. In August 2005, he was named their check airman for the Citation 500/550 series, but as of the day of the accident, only about 300 of his 14,000 hours had been logged in those models. FAA records showed that he failed a Part 135 proficiency check after prematurely deploying the thrust reverses during landing; while he passed a retest the same day, the FAA inspector “commented that the captain did not have the knowledge of the airplane’s systems needed for a check airman.” Company pilots interviewed during the investigation “indicated that although he was a capable pilot, the captain lacked in-depth airplane systems knowledge … [and] seemed to focus on business issues rather than on flight operations and safety.”

The first officer, age 65, also held a multiengine ATP certificate and was type-rated in the Cessna 500 and 550, Mitsubishi MU–300, and Beechjet BE–400. Unlike the captain, he was not a full-time professional pilot, although he’d accrued 9,200 hours of flight time. The NTSB investigators described him as “a businessman who flew commercially part-time” including a prior stint for the same operator between December 1998 and August 2002. During that time, he’d failed upgrade training to captain; he’d also caused a gear-up landing by taking off with the generator switches in the Off position, and then failing to follow the appropriate emergency procedures. On another occasion, he’d turned off the avionics bus attempting to switch the engine ignition from On to Norm. Another company pilot described him as “a nice guy who had no idea how the airplane operated,” adding he “tended to act without thinking.”

The airplane was not equipped with a flight data recorder, nor was it required to be. Without that information, the NTSB was unable to determine exactly what triggered the emergency. Two scenarios seem most consistent with the available data. The first was that while attempting to engage the yaw damper, the first officer had instead activated the autopilot. The two are controlled by identical buttons adjacent to one another on the center console, and without new programming, the autopilot would have defaulted to the heading of 009 degrees used on approach. This would account for the left-turning tendency, as their en route heading was 050. But the filament of the autopilot-engaged annunciator was not stretched, implying that it had been off at impact, and an examination of its clutch mechanisms showed them to have been disengaged.

The second possibility was a pitch trim runaway. Chafing and soot marks on the wiring bundle inside the first officer’s yoke suggested the possibility of a short circuit that might have led to runaway trim, and the position of the cockpit indicators and extension of the jackscrews was consistent with a full nose-down deflection. However, the need for continued retrimming during climbout makes it unlikely that runaway trim would go unnoticed for long, and this explanation fails to account for the rolling motion reported by the captain.

Regardless of the cause, it was the crew’s response to the abnormality that doomed the flight. Performance studies on a similar Citation II showed that the airplane “would have been controllable if the captain had not allowed the airspeed and resulting control forces to increase while he tried to troubleshoot the problem.” Noting that the captain had relatively little difficulty controlling the airplane at low airspeed, the NTSB cited the crew’s “haphazard and poorly coordinated troubleshooting efforts” as having “allowed an abnormal situation to escalate to an emergency” and concluded that “if the pilots had simply maintained a reduced airspeed ... the aerodynamic forces on the airplane would not have increased significantly” and “the pilots should have been able to maintain control of the airplane.”

It also noted that “The first officer provided little or no support to the captain...and was arguably a distraction because the captain had to monitor the first officer’s actions as well as perform flying pilot duties”—a caution that weak knowledge can become a serious liability during an abnormal situation.