Get the app Get the app
Get the latest news on coronavirus impacts on general aviation, including what AOPA is doing to protect GA, event cancellations, advice for pilots to protect themselves, and more. Read More
Already a member? Please login below for an enhanced experience. Not a member? Join today
News & Media Lantana Airport businesses scramble to survive

Small aviation businesses that once thrived at Palm Beach, Florida’s Lantana Airport may be approaching a crisis point as security shutdowns ordered for President Donald Trump’s stays at nearby Mar-a-Lago ground all local flying during peak weekend money-making periods. 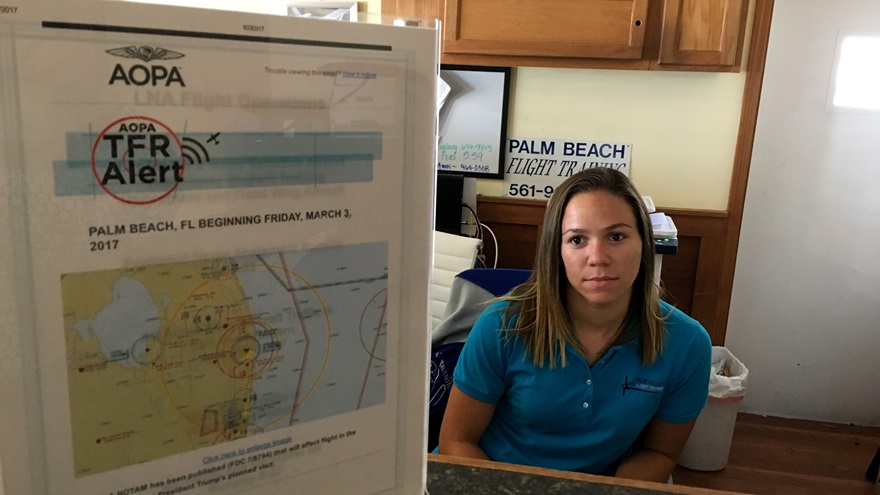 Jobs may soon be at stake for some employees, and lost revenue is already hitting their employers’ finances. The tenant community at the airport—one of the nation’s busiest general aviation fields—has made no secret of the adversities they face under current security arrangements for presidential weekends in Palm Beach. So far, appeals for relief have fallen on deaf ears, said airport users who described the situation to AOPA.

The impact may grow more severe in the near term: The fixed-base operators, flight schools, helicopter enterprises, and other airport tenants have been told to expect extensive lockdowns as Trump’s trips cut off Palm Beach airspace during prime weekend flying times, turning revenue-rich long holiday weekends into profitless periods.

Stellar Aviation, Lantana Airport’s FBO, has been taking its biggest financial hit in lost fuel sales. With the airport under lockdown multiple weekends a month during Trump’s travels as president, owner Jonathan Miller has begun to ponder his staffing needs during slack times.

“It starts costing people their jobs at some point,” he said.

At an airport meeting with security officials about the local impact of the security measures, “We were pretty much told it’s just too bad,” he said.

“That becomes untenable for any small business. Banner towing, helicopter tours—those businesses are built around the weekends,” he said.

Weekends also are the lifeblood of flight schools. Marian Smith has operated Palm Beach Flight Training at Lantana Airport for 19 years, and loves running her business that now has 15 airplanes, 18 flight instructors, and about 65 students—many investing their financial resources in becoming professional pilots.

The frequent temporary flight restrictions that have idled the field from Friday evenings to Monday mornings on most recent weekends have been particularly onerous for the flight school, as its aircraft remain parked and her flight instructors cancel income-producing lessons. Meanwhile, the rent that must be paid to Palm Beach County, which owns the airport, still comes due.

Smith has tried shuttling some of her fleet out of the TFR airspace to Fort Lauderdale Executive Airport. But between the cost of the ferry flights and the reluctance of some customers to take on an extra hour’s round-trip drive for lessons, it’s been a break-even strategy at best, she said.

Attempts to bring the impact of the security policies to the attention of a range of officials have shown no results. 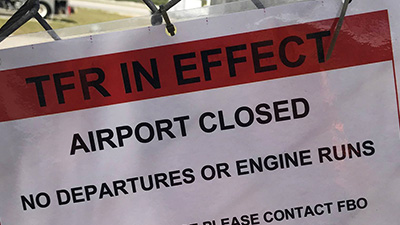 “Reaching out doesn’t get us anywhere,” she said.

As president of Palm Beach Aircraft Services, a maintenance and repair business, David Johnson is a long-time member of the airport community, and is AOPA’s Airport Support Network volunteer at Lantana Airport. (The airport’s name in longhand is Palm Beach County Park Airport, but its identifier, LNA, hints at its more familiar designation.)

Johnson runs a weekly advisory board meeting of airport users, yet he was not on the guest list of a recent invited-persons-only meeting with airport administrators, elected officials, and security agency representatives. AOPA also awaits a response to a February letter to Homeland Security Secretary John F. Kelly in which the association proposed implementing Transportation Security Administration gateway screening procedures at Lantana Airport to allow departures.

The airport meeting, Johnson said, was held “as a courtesy” rather than to entertain proposed changes to security measures.

“They really didn’t give us any hope, that’s the word I got,” he said, noting that county officials have been sympathetic to the tenants and are looking into possible mitigations.

AOPA’s advocacy team continues to press for consideration of workable solutions to the problem of Lantana Airport’s security lockdowns, and will ensure that the impact of current policies on airport users does not go unrecognized.

Smith, for example, who worked as a flight instructor for five years before buying Palm Beach Flight Training, estimated that her aircraft rental revenue hours declined to about 20 percent of pre-TFR levels during the first five weekends of security shutdowns, for a $62,000 reduction in revenue.

That bodes poorly for the upcoming peak flying season. But Smith has made GA her life’s work, and is determined to find a way to weather the storm.

“I love the business,” she said, adding, “Maybe not this year.”