With revamped aircraft certification rules set to take effect in August, many of those who gathered to talk about building VTOL electric aircraft for Uber’s planned network of personal aircraft stuck around in Dallas April 27 to learn about how such vehicles will be approved by the FAA under the new Part 23. 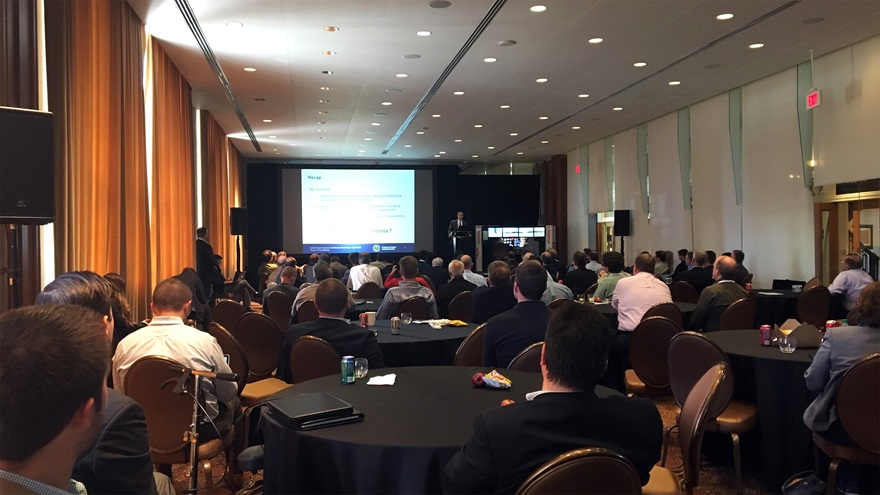 The General Aviation Manufacturers Association hosted a well-attended briefing April 27 in Dallas on the revamped Part 23 rule that takes effect in August. Photo by David Oord.

AOPA Senior Director of Regulatory Affairs David Oord was among many who attended both the Uber Elevate summit in Dallas, and stayed for a workshop organized by the General Aviation Manufacturers Association (GAMA) that included a detailed briefing on how manufacturers will go about bringing innovation and new technologies to market. Reducing the cost of certification with government regulations, in the United States and around the world, is one effect of the years-long effort to overhaul and modernize aircraft certification. The reformed Part 23 regulation that will be in effect Aug. 15 removes obstacles to market entry that would have made many of the concepts floated and pitched during Uber Elevate difficult if not impossible to certify.

“I think it worked out well,” Oord said of the full day of presentations by GAMA and FAA officials to an audience of existing aircraft makers and those who aspire to under the new system. AOPA has been actively involved in the development of the new standards. Expectations are that new designs like eVTOL as well as traditional aircraft designs will be able to take advantage of the reformed standards. Traditional aircraft costs could begin to drop under the new standards.

“There are a lot of projects that are in the pipeline now and going to come online pretty quickly,” Oord said. “Our membership wins in the long run, because now we’re going to have new designs that are exciting to fly and ultimately more safe.”

The essential difference between the new Part 23 and the old is summed up by time. Oord said the transition from prescriptive standards to performance-based standards will make regulations, rules, and industry standards as a means of compliance much more responsive to new technologies, including electric propulsion contemplated for Uber’s future eVTOLs. Standards will be developed and utilized much more quickly than before.

“We will be able get a standard out within a year, whereas a rule would be five, 10 years,” Oord said. “That alone should incentivize companies to invest in new products and technologies.”

“The attendance at this event indicates the high-level of interest in this fast growing sector of general aviation,” Bunce said in remarks repeated in a press release. “GAMA is proud to help lead the way through the work of our Electric Propulsion and Innovation Committee, assuring the hybrid and electric propulsion industry can shepherd innovation into the traditional regulatory regimes governing the design and operation of aircraft.”

“Everybody really recognizes that this is one of the things that will be hardest to overcome,” Oord said. “How do you ensure the safety of the public, flying in congested, developed urban areas?”

Whatever the shape of future flying vehicles, Uber has received much attention with its stated intention to bring flight to the masses.

“There is this inherent desire to fly,” Oord said. “I think we all have it.” But too often people come into general aviation airports only to be greeted with decades-old technology and airplanes that have logged many years of service, nothing shiny or new or particularly novel about them. New technology could help answer another fundamental question:

“How do we show that this is still a viable path… and indeed, you can fly?” Oord said.

The Dallas workshop on Part 23 was the second such event GAMA has hosted, with a third planned soon in its Washington, D.C., office.